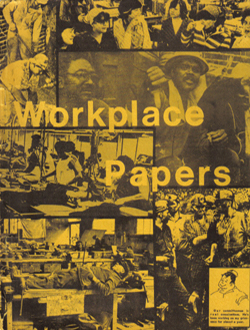 Sojourner Truth Organization was a small new communist organization, which came into existence in the winter of 1969-70. It was one of the first of the post new left organizations which was involved in direct factory organizing during this period. The group lasted well into the 80s (when it quite simply withered away) and had branches and or members in Chicago, Kansas City, San Francisco, Portland, Denver, New Orleans, and New York and elsewhere. STO while small in number was active in the workplace, anti-imperialist and anti-racist organizing, the womens movement, the anti-nuclear movement, the solidarity movement, anti-fascist organizing and more.

It distinguished itself from other New Left and new communist groups in a number of ways. Perhaps, the most significant was in its critical approach to the role of race in the formation of the American working class which is placed on the front burner of all of its organizing activity. This perspective is perhaps best expressed in Noel Ignatiev's Preface to Workplace Papers, a 1980 publication of the STO:

Briefly stated, this perspective was as follows:

in modern industrial societies, bourgeois rule depends on the development of a variety of "systems" that channel the outbreaks of the exploited class and allow their absorption by capital; that the specifically American framework for this process is the white-skin privilege system — the conferring of a favored status on the white sector of the proletariat; and that the trade unions cannot be understood apart from this framework.

STO was influenced by the ideas of the radical Marxist theorist C.L.R. James and by Italian Autonomist Marxism.

STO argued (along with James) that a free society emerges from the desires and actions of the working class itself, not the teachings or leadership of a vanguard.

STO's thought and practice is still felt in a number of present day organizations.

Anarchists, also, have expressed an interest in STO which was not an anarchist but a Marxist organization. Still they find STO's positions in favor of extra-union labor organizing, direct action anti-fascism, autonomy, dual consciousness, and the white-skin privilege analysis to be of interest.

Many, if not most of its members are still active today in one way or another.

You may notice that in many places the viewpoint of the Oread Daily (whenever that viewpoint is actually put out there) and that of STO coincide.

There are two related web sites some of you might find of interest.

The first is an archive of STO material - Sojourner Truth Orgaization can be found at http://www.sojournertruth.net/main.html. There you will find numerous pamphlets and essays written by STO members. Although they are years old they are not at all without merit.

In addition to the above mentioned link, for those of you interested, there is also a current STO related blog at http://sojournertruth.blogsome.com/.

The following comments come from the blog and mention a pamphlet which you can download at the archives site mentioned previously.

Ah, white Skin privilege. Years before I ever heard of the Sojourner Truth Organization, I had heard this term, perhaps initially in some sort of workshop for white people confronting racism. By the time I graduated from college, I was familiar with the journal Race Traitor, whose primary editor I knew was Noel Ignatiev. By the time I met Noel in person a year or two later, I was just becoming aware of the past existence of STO. All of this is fitting, in a way, because probably the single greatest legacy of STO to the white left of the last two decades has been precisely the notion that people who are socially designated as white have specific privileges as a result.

Given the broad acceptance of this analysis within the contemporary white left, and particularly among anarchists, it is hard to imagine how marginal it was in the early 1970’s. At that time, within the white left, STO was one of only a handful of small, far-left groupings that advanced the white-skin privilege line as central to the functioning of white supremacy in North America. In an interview, one former member of STO recalled presenting the basic outline of this analysis at a conference in Atlanta in 1974; Bob Avakian (then of the RU, now maximum leader of the RCP, living in France) denounced STO’s approach as “bankrupt, bankrupt, bankrupt!” Throughout the 1970’s, this was probably a broadly representative response within the white left. (This is probably still the line of the RCP on this question, although I honestly haven’t paid much attention recently; perhaps the folks at Red Flags can enlighten us.)

The basic idea of white skin privilege comes from W.E.B. Du Bois, who, in his classic work Black Reconstruction in America discussed the “public and psychological wage” (p. 700) that white workers received in exchange for their complicity in the continued functioning of white supremacy. For many decades, such an analysis was welcome in black circles, but had no currency among white radicals. In the 1960’s, two white revolutionaries, Noel Ignatin and Ted Allen, began to popularize this approach to understanding and fighting racism.

The “wage” identified by Du Bois amounts to a series of easily identified relative privileges that are granted to white people in the United States, regardless of their economic class: preferential treatment by cops and courts, being hired first and fired last from most jobs, access to higher quality schools, and so forth. There can be little doubt that these privileges continue to exist in general terms up through the present day, even (or perhaps especially) when they are enforced without reference to (or in contravention of) the law. This was even more clear when Ignatin and several others founded STO in 1969/1970.

STO’s version of white skin privilege analysis differed from that put forward by some others in the white left during the 1970’s. On the one hand, groups like the Weather Underground and the Prairie Fire Organizing Committee (PFOC) argued that white skin privilege so poisoned the well of the white working class in North America that there was no point to the sort of workplace organizing that STO prioritized for much of its existence. As a former member of STO explained in reference to PFOC, “They totally unmoored themselves from the class, and we hadn’t; that was what distinguished us from them.”

On the other hand, especially during its middle period, when it embraced national liberation struggles as the centerpiece of communist revolution, STO was criticized in some circles (including those clustered around Ted Allen) for putting too much emphasis on the complicity of the white working class in the functioning of white supremacy. The basis for this critique was Allen’s historical work, which purported to demonstrate that the development of white supremacy was almost entirely the result of top-down action by the bourgeoisie. (Allen’s The Invention of the White Race was the eventual culmination of this line of thinking.)

In the end, STO steered a sort of middle course, recognizing both the problems and potential of the white working class in North America. In this sense, the white skin privilege analysis of white supremacy can be seen as an example (albeit the most important one by far in the US) of the dual consciousness that I wrote about previously.

The interesting question, then, to which I do not have a clear answer, is “how did (a version of) the white skin privilege analysis become so widely accepted within the white left, and even among progressive liberals?” The transition must have begun sometime in the late 70’s or early 80’s, with the growing acceptance of this approach within the campus left in the US.

Among anarchists, the turning point was clearly marked with the creation of Love and Rage in 1989. At least two former members of STO were members of L&R at various points, and Race Traitor was a common point of reference for the group throughout the 1990’s, even among the substantial portion of the membership that disagreed with its analysis. By the time Love and Rage disbanded in 1998, the face of North American anarchism had changed dramatically, and no more so than in the area of understanding and confronting white supremacy. In the end, the legacy of STO for anarchists has been most visibly built around the increasing acceptance of a white skin privilege analysis over the past fifteen years.
Posted by Oread Daily at 3:00 PM

Thanks for posting material from my blog. I'd love to be in touch with you and talk more about STO.

Send me an email address and I'll contact you.

This brief introduction to STO unfortunately perpetuates some vulgar anti-WUO/PFOC views held by STO. "They unmoored themselves from the class..." There were differences within the Weather Underground and within Prairie Fire Organizing Committee, betwen those two organizations, and between PFOC and STO on questions of the nature of white supremacy and white skin privilege, and of the character of the working class(es) inside the US in both a domestic and international context. Some of the people who joined the WUO or were later involved in PFOC had also been engaged in point of production organizing, as well as other forms of organizing among working class "white" people.

If you look at matters exclusively from the perspective of STO, it is difficult indeed to understand how awareness of white privilege (and white supremacy, a term STO did not use so much) has become more generalized in the white left. Certainly, the WUO, May 19th Communist Organization, Prairie Fire Organizing Committee and various of the successor organizations established by former cadres in those groups played a significant role.

STO, PFOC and May 19th in their time did in fact see themselves, sometimes uncomfortably, as part of a common political tendency. I worked in Chicago (as part of PFOC) in a unity-struggle-unity relationship with many comrades from numerically-larger STO chapter there. We were jointly involved, for example, in creating a Puerto Rico solidarity organization that responded to the leadership of the Movimiento de Liberacion Nacional (at that time a joint Puerto Rican/Mexicano organization) and the Liga Socialista Puertorriquena that supported the clandestine Puerto Rican freedom fighters in the US and Puerto Rico such as the FALN and the Macheteros.

Such principled relationships with and support for anti-colonial struggles is what enabled STO, PFOC and other groups in this tendency to avoid the sectarianism and irrelevance that dragged most of the other remnants of the New Left into doctrinaire Maoism.