I'm still on hiatus, but I had to post this from the STEVELENDMANBLOG. 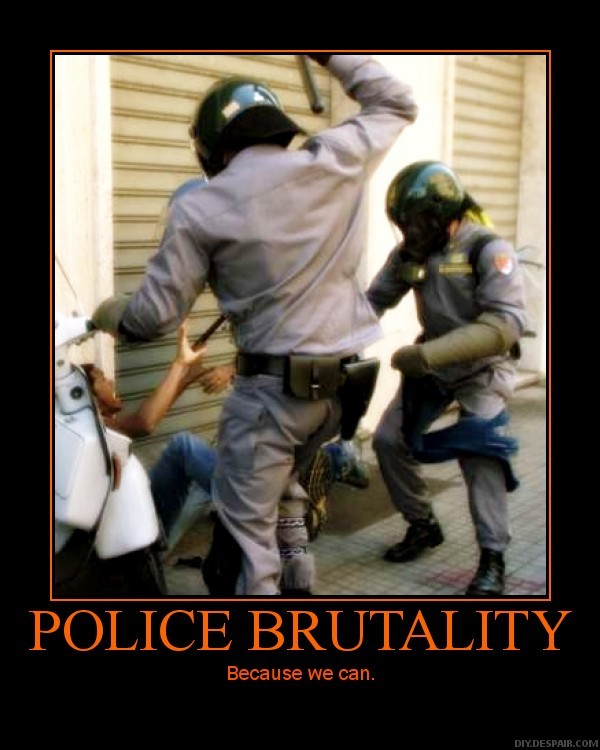 by Stephen Lendman
Tuesday, 13 July 2010
Despite Congress passing the 1994 Violent Crime Control and Law Enforcement Act, Congress has consistently failed to fund it. Further, the legislation doesn't require local police agencies to keep records, nor does it criminalize police violence and excessive force as human rights violations.
Across America, daily incidents occur, one of many the cold-blooded January 1, 2009 murder of Oscar Grant - unarmed, offering no resistance, thrust face-down on the ground, shot in the back, and killed, videotaped on at least four cameras for irrefutable proof. USA Today said five bystanders taped it.
His killer: Oakland, CA transit officer, Johannes Mehserle, tried for the killing, the jury told to consider four possible verdicts - innocent, second-degree murder, voluntary manslaughter, or involuntary manslaughter, jurors deciding the latter.

The Legal Dictionary defines it as "The act of unlawfully killing another human being unintentionally," the absence of intent distinguishing it from voluntary manslaughter. Many states don't define it or do it vaguely. Wallin & Klarich Violent Crime Attorneys say in California it carries a two - four year sentence. However, since a gun was used, Judge Robert Perry can add three to 10 additional years.
Because minority victims seldom get justice, especially against police, Mehserle may serve minimal time, then be paroled quietly when the current furor subsides.

After the verdict, it erupted on Oakland streets, hundreds turning out to protest, Bay Area indymedia.org saying:

"The actions of the Police in Oakland tonight (including dozens of arrests) show their disrespect for justice in General. Their heavy handed violence towards protestors just reinforces their total disconnect with the people of Oakland." It's as true everywhere across America, police acting like Gestapo, usually unaccountably.

Grant's family will appeal the verdict and is suing the Bay Area Rapid Transit (BART) for $25 million, his mother Wanda Johnson saying "My son was murdered (and) the law has not held the officer accountable." It rarely does for Black, Latino, or other minorities, no matter the injustice, civil rights lawyer John Burris, representing Grant's family in the civil suit, saying:

"The system is rarely fair when a police officer shoots an African-American male." Police brutality against them and other minorites is systemic, including beatings, torture, and cold-blooded murder, usually with impunity, justice nearly always denied.

"The Justice Department has been closely monitoring the state's investigation and prosecution. The Civil Rights Division, the US Attorney's Office, and the FBI have an open investigation into the fatal shooting and, at the conclusion of the state prosecution, will conduct an independent review of the facts and circumstances to determine whether the evidence warrants federal prosecution."

Systemic Police Brutality
An earlier Jones Report.com text and video account headlined, "Epidemic of Police Brutality Sweeps America," showing footage of police repeatedly tasering a student with 50,000 volts of electricity for questioning the 2004 election results at a campus meeting.
Other videotaped incidents showed:
Amnesty International (AI) on American Police Brutality
On its web site, AI says "Police brutality and use of excessive force has been one of the central themes of (AI's) campaign on human rights violations in the USA," launched in October 1998. In its "United States of America: Rights for All Index," it documented systematic patterns of abuse across America, including "police beatings, unjustified shootings and the use of dangerous restraint techniques to subdue suspects."
Yet little is done to monitor or constrain it, evidence showing that "racial and ethnic minorities were disproportionately" harmed by harassment, verbal and physical abuse, false arrests, and in the case of West African immigrant, Amadou Diallo, shot at 41 times by four New York policemen, struck 19 times and killed while he stood in the vestibule of his apartment building, unarmed and nonviolent, victimized by police brutality.
Nationwide, driving while black has been criminalized, racial profiling used for traffic stops and searches for suspected drugs or other reasons, the practice especially common in California, Colorado, Florida, Illinois, Indiana, Maryland, Massachusetts, Pennsylvania, Oklahoma, Rhode Island, and Texas.
AI cited numerous incidents, including beatings and "questionable" shootings, usually found to be unjustified, yet cops most often absolved. Although most US police departments stipulate that officers should only use deadly force when their lives, or others, are endangered, dozens of cases show they do it indiscriminately, at most being "mildly disciplined" even if guilty of serious misconduct.

"Police shooting(s) resulting in death or injury are routinely reviewed (internally or) by local prosecutors....to see whether criminal laws (were) violated. However, few officers are criminally charged and little public information is given out if a case does not go to trial." As a result, systemic abuse stays hidden, police brutality allowed to persist with impunity.

Despite Congress passing the 1994 Police Accountability Act, incorporated into the 1994 Violent Crime Control and Law Enforcement Act to require the Attorney General to compile national data on excessive police force, Congress has consistently failed to fund it. Further, the legislation doesn't require local police agencies to keep records or submit data to the Justice Department. Nor does it criminalize police violence and excessive force as human rights violations.
ACLU Report on Racial and Ethnic Profiling
In August 2009, the report titled, "The Persistence of Racial Profiling in the United States" [

A "major impediment to (prohibiting it) remains the continued unwillingness or inability of the US government to pass federal legislation (banning the practice) with binding effect on federal, state or local law enforcement."

Nor do authorities comply with the provisions of the 1994 Convention on the Elimination of All Forms of Racial Discrimination (ICERD) that obligates all levels of government.
In addition, the Justice Department's 2003 Guidance Regarding the Use of Race by Federal Law Enforcement Agencies designed to ban federal officers from engaging in racial profiling is, in fact, flawed and does little to end it, because it doesn't cover "profiling based on religion, religious appearance, or national origin."
Nor does it apply to state and local law enforcement where police brutality is systemic. In addition, it specifies no enforcement mechanisms or punishments for violators, and contains a "blanket exception for national security and border integrity cases," besides being advisory and not legally binding.
As a result, it actually promotes profiling and abuse, including false arrests, beatings and killings. It's not surprising how minorities have been systematically mistreated by federal, state and local authorities, or that congressional legislation introduced to stop it never passed.
On December 13, 2007, the House and Senate introduced their versions of the End Racial Profiling Act (HR 4611 and S. 2481). Both bills were referred to committee and never enacted - making it extremely hard to nearly impossible for victims to successfully challenge abuses against them.
As a candidate, Obama promised a "Blueprint for Change" to ban racial profiling and related mistreatment, criminalizing them, but so far, no measures have been introduced or passed, showing another promise made, another broken, a systematic pattern under his leadership, across the board against the constituencies that elected him. Hopefully they'll remember next election and choose another way, a third way, both parties equally corrupted in deference to big money and systemic police brutality that serves it.
National Police Misconduct Statistics
The Injustice Everywhere.com (IE) web site compiles them, publishing them in regular reports, some for individual cities, including daily accounts. One on July 10 covers King County, WA deputy Paul Schene, captured on videotape assaulting a 15-year old girl in jail. He was tried twice, hung juries resulting each time.
On July 9, the County Prosecutor's Office dropped the charges, and won't pursue a third trial. As a result, the sheriff's department may rehire Schene, though he still faces possible disciplinary action. It's currently in arbitration, IE saying decisions nearly always favor officers, in which case he'll likely be reinstated to abuse other detainees, off camera to avoid being charged.
In early 2010, IE published an April - mid-December 2009 (8.5 months) Police Misconduct Report, from figures compiled in its National Police Misconduct Statistics Reporting Project (NPMSRP), begun earlier in March 2009, analyzing data:

"by utilizing news media reports of police misconduct to generate statistical information (to) approximate how prevalent (it) may be in the United States."

Police departments don't usually provide them, nor do courts, except for successful prosecutions, omitting confidential settlements and cases resulting in disciplinary action only, not trials. Media reports, though imperfect, are more complete because laws limit or filter information released. As a result, IE's data "should be considered as a low-end estimate of the current rate of police misconduct," as well as in individual cities covered.
Statistics compiled follow the same DOJ/FBI Uniform Crime Reporting (UCR) methodology, recording only the most serious allegation (not conviction) when multiple ones are associated with a particular incident. The findings were as follows:
In addition, data were compiled for states, cities and counties, excluding unavailable federal statistics as well as local omissions, especially in some states. Various offenses included:
Misconduct status stages go from allegations to investigations, lawsuits, charges, trials, judgments, disciplinary measures, terminations, convictions, and sentences.
IE compiles data regularly, prepares daily and quarterly reports, and henceforth an annual one each January the following year. It explains that its statistics:

"should only be used (as) a very basic and general view of the extent of police misconduct. It is by no means an accurate gauge that truly represents the exact extent (of its extensiveness) since it relies on the information voluntarily gathered and/or released to the media, not (first-hand) by independent monitors who investigate complaints.....because no such agency exists for any law enforcement agency...."

Detailed quarterly and annual reports are produced, not monthly ones considered a less accurate "depiction of the overall extent of police misconduct...." Daily reports cover a sampling of individual incidents. Overall, IE provides a valuable reading of systemic police misconduct, though capturing only a snapshot of the full problem - widespread, abusive, violent, often with impunity, and when officers are held accountable, imposed discipline is usually mild, prison sentences rare and short-term, victims cheated by a criminally unjust system, favoring power over people, no matter the offense.
Final Comments
In December 2007, the UN Committee on the Elimination of Racial Discrimination published a report titled, "

In the Shadows of the War on Terror: Persistent Police Brutality and Abuse of People of Color in the United States," saying:

"Since this Committee's 2001 review of the US, during which it expressed concern regarding incidents of police brutality and deaths in custody at the hands of US law enforcement officers, there have been dramatic increases in law enforcement powers in the name of waging the "war on terror (resulting in) the use of excessive force against people of color....(It's not only continued post-9/11), but has worsened in both practice and severity" - a NAACP representative saying it's "the worst I've seen in 50 years."

From 2002 - 2004, over "10,000 complaints of police abuse were filed with Chicago police....but only 19 resulted in meaningful disciplinary action, a new study asserts." According to Gerald Frazier, president of Citizens Alert, it reflects "not only the appearance of influence and cover-up," but clear evidence that city residents are being abused, not protected, despite the department's official motto being "We Serve and Protect."

Most disturbing is that the Chicago pattern reflects what's happening across America, people of color like Oscar Grant systematically abused, in his case murdered in cold blood, what no criminal or civil actions can undo.

I was born in 1934 in Boston, MA, raised in a modest middle income family, attended public schools, received a Harvard BA in 1956 and a Wharton MBA in 1960. After six years as a marketing research analyst, became part of a new small family business in 1967, remaining there until retiring in 1999. Have since devoted my time to progressive causes, extensive reading, and since summer 2005 writing on vital world and national topics, including war and peace, American imperialism, corporate dominance, political persecutions, and a range of other social, economic and political issues. In early 2007, began regular radio hosting, now The Progressive Radio News Hour on The Progressive Radio Network. Full information above.
Posted by Oread Daily at 4:10 PM 1 comment: