No Scission today.  Too much NCAA Tournament to watch.  Same for tomorrow...

Until later...
Posted by Oread Daily at 2:33 PM No comments: 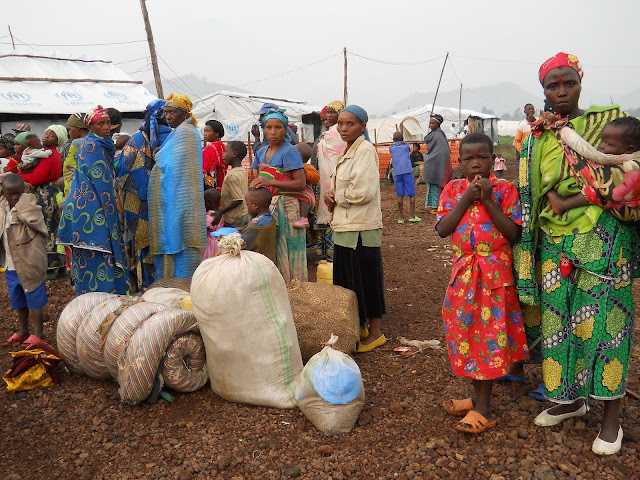 Uganda is home to almost 400,000 refuges according to the UNHCR who have come in search of a safe haven.

However, safe haven is not what they are finding.

Most of these refugees are people fleeing war in the Democratic Republic of the Congo.  The journey to Uganda is anything but easy.  Most walk for days and weeks to get there and according to Medical Teams International women who make it, "suffer mostly from sexual violence and rape....Children suffer mostly from malnutrition, respiratory and diarrhoeal diseases. The rate of children infected with chicken pox is very high."

Food is in short supply for these refugees. The U.N. World Food Programme (WFP) is struggling to keep up with food supplies, as the conflict in North Kivu appears to continue unabated.  IPS reports being told by a spokesperson for WFP:

"Even though we have had some contributions from the United States, Japan, and the United Kingdom this year, WFP still has a funding shortfall for refugees in Uganda. Most of the world's attention is on Mali, Syria and others, but we need the world to know that political instability continues also in DRC."

The organisation has already started to cut food supplies down by up to 50 percent within the refugee settlements. If the numbers of asylum seekers keep rising, the situation could worsen.

Lesbian, gay, bisexual, transgender and intersex (LGBTI) refugees in Uganda, Kenya and many other parts of the world are among the most vulnerable of refugees.  Human Rights First reports:

They are often targeted for violence because of their sexual orientation or gender identity, including by other refugees. LGBTI refugees may be unable to rely on support from the social networks that are critical for the survival of many refugees because they are frequently marginalized by family members or others within the refugee community.

In the words of U.N. High Commissioner for Refugees António Guterres, International Day Against Homophobia and Transphobia (IDAHO), 05-17-2012:


“Many lesbian, gay, bisexual, transgender and intersex (LGBTI) persons, including adolescents, continue to be compelled to flee their home countries and seek protection abroad due to the discrimination and abuse they experience. In many countries around the world, these individuals and the specific protection problems they face in flight and in exile remain largely invisible. It is clear, however, that the nature of the discrimination they encounter can be particularly virulent, their isolation from family and community profound, and the harm inflicted on them severe.”

The following is from  All Africa.


Uganda: Horror of Being a Refugee in Uganda Respect All Regardless of Sexual Orientation" her placard read.

She was preparing to participate in a peaceful march to launch the awareness week for the Fifth Annual Sexual and Gender-Based Violence in Peace organised by the Refugee Law Project (RLP).

The light-skinned 34-year-old Congolese refugee ran away from her home country in September 2001 to find peace in Uganda.

While there are no bullets flying past her daily, Uganda has not offered much of a peaceful life.

"I'm from Bukavu, Congo. My father who was a truck driver was killed but we don't know who killed him. One time when [Joseph] Kabila took over, rebels entered my house and asked for my brothers. My mother had hidden them in the ceiling. So, the rebels killed my mother and raped me," Harriet recalls.

She took refuge at her pastor's home. But at the time, it was dangerous for Congolese to associate with Rwandans. Since the pastor was of Rwandan extraction, he was hunted and killed, prompting Harriet to move east to Beni in 1997 where she stayed with her brother, Katita Ngongo, a journalist.

When war broke out again in 2001, soldiers attacked her home and killed her brother.
"I heard the door break in and they asked that we give them our brother. They asked for all his work, his recordings. We said we did not know where he kept his things. When I carried my baby so they could feel sorry for me, they just continued to beat me. I ran away with some people into the bush and then found a truck driver who helped me cross the border to Kasese," she narrates.

The trucker then brought her to Kinawataka slum in Mbuya, where she found refuge with a Ugandan woman. She then went to the United Nations High Commissioner for Refugees, where she acquired a permit for refugee status. To make ends meet, she started working in a restaurant.

But the money from here was insufficient; so, a friend encouraged her to abandon the restaurant and start a new line of work.

"The situation got worse and I had to work. I met a Ugandan friend who invited me into sex work. She said that as a woman how can I fail to find work when I move with my 'shop' which can get me money? She took me to a bar in Bugolobi. She showed me how to get customers. My first pay was Shs 10,000 a night ... I started living with her in Kitintale," Harriet explains.

Today 12 years later, Harriet's life had not changed much. She says the money she made from the sex work was not enough but it was more than what she earned from the restaurant. To supplement her nocturnal duties she would sell jewellery. Then the evils of her job in the dark started to rare their ugly head.

"Sometimes you get a customer who beats you or one who gives you drugs. Sometimes you find that you don't know where you are. Beating became synonymous with the job, if you are not doing a style he wants," she says. "One day a man raped me behind and to this day I still feel pain. Some exhaust you, some promise money and don't pay you. When I told my friends, they said it is the same thing they go through."

Despite her problems, Harriet says she cannot report to police because she has come to learn that police cannot do anything to help her. However, Police spokesperson Judith Nabakooba dismissed this notion as untrue.

While she is yet to quit her sex work, Harriet has found solace in Angels Refugee Support Group Association (ARSGA), where she shares experiences with fellow refugees for comfort and counselling.

"One time I got pregnant and it was an ectopic pregnancy, I had to get an operation. They took out one of my fallopian tubes. I still have to do this work because there is no other work I can do," Harriet narrates.

Today she marches in line with other refugees of war who face, physical and sexual violence despite having run to Uganda to find a safe haven. There were some 381,550 refugees in Uganda by January 2013 according to UNHCR figures. But Uganda has been anything but safe for them.

In marking this contradiction of expectations, the Refuge Law Project (RLP) decided to create awareness of the unrest refugees meet in Uganda. The awareness week was marked last week under the theme From Sexual Violence in Conflict to Domestic Violence in Peace.

"When we say that sexual violence is a weapon of war, to me there is no doubt about it. It immobilises the victim and makes the community less able to engage in war with their attackers, it is a worse weapon than most bombs," said Dr Chris Dolan, the Director of RLP.

The effects of the violence meted on refugees follow them in the times of peace. Men who are raped fear to tell their wives, women suffer long-term effects including fistula - uncontrolled passing of urine due to damage on the bladder.

The Refuge Law Project (RLP) works in partnership with other organisations like Men of Hope Association in Uganda, UNHCR and ARSGA in receiving refugees affected by rape, physical abuse, unemployment, disease and discrimination.

For other refugees like 31-year-old Roselyn, life in Uganda is as bad as life in Rwanda where she fled from because she was being persecuted for being gay.

"I was arrested, beaten and tortured because of my sexual orientation. My family harassed me when they found out. They refused to admit me at Kigali Independent University when they realised I was a woman yet they thought I was a man.

"In 2010, three policemen and one local leader came and asked me for my gender. I thought they were coming for education issues. They started beating me and arrested me. I was taken to the police station where I was tortured. They insisted that I say I am a lesbian. I refused to reply. My head, back and leg were affected and from that time to now I am lame," Roselyn, who walks with a cane, says.

She says she is now a refugee living with poverty, disability, disease and joblessness. She does not want to reveal details about herself because she fears she will be persecuted at the hospital when she goes to seek medical treatment or at offices of refugees.

"In 2012, I was in my house in Nateete [when] my neighbours left me with their keys. When they returned to pick their keys, one of the men entered and closed my house. We started fighting, I was crying for help but no one came to help me. I was sick; so, he overpowered me. That man told me that he is ready to go to Luzira [prison]. He raped me," Natalie says.

She too feared to report to police. Although homosexuality is illegal in Uganda, Nabakooba insists, "for us we don't ask for sexual orientation when you come to police to report a crime. We need to get to them and understand some of those cases."

In any case, Roselyn had nowhere to turn to but her fellow refugees.

*Names have been changed to protect the identity of the refugees.
Posted by Oread Daily at 4:03 PM No comments:

SCISSION FEATURING THE NCAA TOURNAMENT FROM AN AUTONOMOUS MARXIST PERSPECTIVE.

I can't say I am comfortable with my picks.  Though I root for KU and though I have them winning them tournament, I don't really count on that happening.  It just turned out that way because of the match ups, that's all I can say.  My two big upsets which put South Dakota State over Michigan, and then Montana over Syracuse in practically a home game for Syracuse seems a stretch, but whatever, I needed some big upsets.  New Mexico in the Final Four, well, you never know.  I almost picked St. Louis to upset Louisville, but chickened out at the last minute.  I think Louisville is not as good as everyone thinks, same for Florida.  I was shocked KU was a number two number one, but lots of teams could have switched seeds and I don't think those top seeds matter much especially this year.  Anyway, the bracket is further down, so it fits on my blog page.


NOTE: OOOPS...THAT SYRACUSE GAME IS HARDLY A HOME GAME.  I WAS THINKING FOR SOME REASON IT WAS IN ALBANY.  IT IS IN SAN JOSE.

Posted by Oread Daily at 3:31 PM No comments: