MUST BE THAT TIME OF THE YEAR: FORBES SAYS CASTRO AS RICH AS THE QUEEN 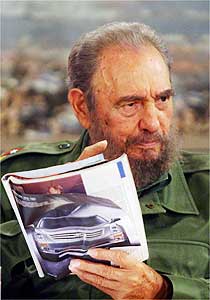 Cuban President Fidel Castro said he would offer his resignation if the United States, can prove that he has a huge personal fortune as claimed by Forbes magazine.

Fidel Castro made a special TV appearance on Monday along other Cuban personalities to respond to the defamation by the US Forbes business magazine, which released an article listing him among the world’s ten richest leaders.

“I challenge everyone, above all that petty thief Bush, the US intelligence agencies, the thousands of banks in the world, to prove it.” he said and added that “If they can prove that I have a bank account abroad with 900 millions, or 1.5 billion dollars, or with one single dollar, I will resign my post.”

Earlier this month, Castro was listed by Forbes as the seventh wealthiest ruler with 900 million dollars. The estimate includes state enterprises that the magazine assumes he controls in Cuba, among them the Havana Convention Centre, the Cimex retail conglomerate and a pharmaceutical company that exports vaccines.

The Cuban Revolution leader considered it ridiculous that he was attributed with such a vast fortune when he had no heirs. “What do I want all that money for if I am turning 80 years old, what a strange fortune without heirs?” he asked himself and said “they want to make me appear like one of those many thieves that they nourish.”

Castro says his net worth is nil and that he earns only 900 Cuban pesos ($US40) a month as head of state.

The following article comes from AxisofLogic.com

Please, Not Fidel Castro’s Fortune Again!
By Pascual Serrano. Translated from Spanish for Axis of Logic by Barbara Maseda and revised by Nancy Almendras, Tlaxcala*

Forbes magazine says that he has a 900 million dollar fortune. Let’s see how they calculated it.

Once again Forbes magazine has included the Cuban president in the list of what they call the richest “kings, queens and dictators." Of course, all the media enthusiastically echoed this information, released every year.

If we search in Google News, we’ll see that more than a hundred websites report, not on the list of millionaire rulers, but on Fidel Castro’s presence in the list, despite his position is not the first one, but the seventh. One can presume that if the Cuban president would not be in this inventory, the wealth of these people wouldn’t be breaking news.

The magazine reports that Castro’s fortune reached 900 million dollars this year, almost double the 550 millions in 2005. But the most important is to see how Forbes calculated Castro's money. In the website they explained: "For another controversial dictator, Fidel Castro, we assume he has economic control over a web of state-owned companies, including El Palacio de Convenciones, a convention center near Havana; Cimex, retail conglomerate; and Medicuba, which sells vaccines and other pharmaceuticals produced in Cuba.".[1] Of course the president of Cuba has the control of the governmental companies, just like in every other country. But this time Forbes has varied its last year thesis, when they claimed that the companies were owned by Castro.

It continues: "Former Cuban officials insist Castro, who travels exclusively in a fleet of black Mercedes, has skimmed profits from these outfits for years." All the Cubans know that Castro rides in a twenty-year-old black Mercedes, accompanied by cars of his guard, like the rest of the presidents, especially those that the US has attempted to assassinate. In most of the countries all the ministers and many managers have a Mercedes, and quite less old than Castro’s.

The reasoning about former officials saying that he "has skimmed profits from these outfits" as evidence of his wealth, is a worthless empty argument. His “fortune” certainly doesn’t come from the profits of the Palacio de Convenciones, a centre where public acts are held, and where the single money circulating is the Cuban peso, in case one wants to buy a one peso [2] coffee in the bar. As for Medicuba and Cimex —as I pointed out last year replying the same Forbes´ argument—, both are public companies that market national products. There is not any registration or document establishing that these companies belong to the president, all the countries have public companies.

And here comes Forbes’ real challenge, How much has the president kept for himself? This is the way they calculated it: "To come up with a net worth figure, we use a discounted cash flow method to value these companies and then assume a portion of that profit stream goes to Castro." That way, instead of 900 millions they could have found twice as much; after all, it was just about imagining the "portion of that profit stream" which they believe “goes to Castro." If they will do the same next year, they’ll probably be able to report that his fortune has doubled.

The report goes on: "To be conservative, we don’t try to estimate any past profits he may have pocketed, though we have heard rumors of large stashes in Swiss bank accounts. Castro, for the record disagrees, insisting his personal net worth is zero." In fact, to prove the existence of his fortune they should have detected money in a bank account in his name, or title deeds accrediting him as owner or usufructuary. Strange millionaire this one, whose jewels, yachts, mansions and holidays skiing or in the beach are invisible.

After analyzing Forbes’ calculation method, it is obvious that they don’t have evidence of money in any bank account, nor properties in his name. Nonetheless, they continue to say that he has 900 million dollars. In 2003, the magazine established Fidel Castro's wealth was about 110 million dollars. They have said before that it was very complicated to estimate these fortunes, so they calculated the Cuban president's personal treasure assuming that a percentage of Cuba's gross domestic product (GDP) was going to his pocket. So simple like that.

The news coverage on the issue was contradictory. Reuters began its report saying that “the Cuban President Fidel Castro got furious when Forbes magazine estimated his fortune at 550 million dollars last year". Several paragraphs later on, the same note said that "Castro had stated that he was considering to suit Forbes after the publication of the list in 2005, and he laughed at the fact that his fortune was very similar to that of the queen of England.” He got furious and laughed at the same time? He made those comments at the Palacio de Convenciones —the same one making him rich— before thousands of Cubans. Indeed, —I was there— he amusedly highlighted that the fortune attributed to him was similar to that of the British Queen, and he added that to take or not any actions against the magazine was up to him.

It looked like Castro was going to overcome Queen Elizabeth this year. But according to the media, neither the Buckingham Palace, nor the crown jewels were considered part of her fortune. On the other hand, Fidel Castro gets 900 millions with the yields of Palacio de Convenciones where only official events are held and the entrance is free of charge.

If instead of being a socialist president determined to share his Palacio de Convenciones with the Cubans, Fidel Castro would be a fifty thousand million dollar capitalist like Bill Gates, he would certainly be awarded the Prince of Asturias Prize for International Cooperation in Spain.

This article was originally published in Rebelión.
Posted by Oread Daily at 11:03 AM

TAXES FOR VAMOS A CUBA: "SINFUL AND TYRANNICAL"
By Frank Bolanos

Mr. Frank Bolanos is a member of the Miami-Dade School Board

If the Newark, New Jersey school board decided to issue "Little Black Sambo" as a third grade reader, how would that largely African-American community react?

Those aggrieved local folks endured the insults, catcalls and jeers of the liberal elite until Marburger, a self-described liberal's liberal, spoke up and gave them pause. Today, the Miami-Dade school board and I are being accused of censorship for our efforts to remove from school libraries "Vamos a Cuba," a children's book that paints a false and distorted portrait of life in communist Cuba.

If the teachers' unions, Herald columnists, the ACLU and Fidel Castro himself are to be believed, the Miami-Dade school board is pillaging school libraries, burning books, oppressing the intellectual freedom of helpless children, and stomping on the First Amendment.

None of this is true; this is not a First Amendment issue. Censorship occurs when government refuses to allow people to purchase material, not when it refuses to provide that material at no charge.

But taxpayers must not be forced to subsidize falsehoods, propaganda or insulting imagery. As Thomas Jefferson, wrote, "to compel a man to furnish contributions of money for the propagation of opinions which he disbelieves and abhors is sinful and tyrannical."

Simply put, Jefferson, a framer of the Constitution our critics cite, would see no reason for our schools to spend sparse taxpayer money to promote the circulation of misinformation and lies many in our community equate to oppression and the loss of liberty and life.

If our public schools provided "Little Black Sambo" to African-America children, I would stand with their parents as this would be offensive, racist and an inappropriate use of tax dollars. If our public schools put the grotesquely anti-Semitic children's book "The Poisonous Mushroom" into libraries, I would stand with Jewish parents to oppose this abhorrent act and misappropriation of public funds. The struggle against Cuban communism is no less important.

In 1995, the Miami Herald was forced to trash an entire section after an offensive cartoon of Martin Luther King, Jr. was mistakenly printed inside. Over the nationally syndicated cartoonist's objections, editors made the bold decision to pull a half million copies of the magazine.

They did it by hand; it took two full days. It was hard and expensive work to correct a mistake that took only moments to make. Similarly, a foolish decision by an entrenched bureaucracy had to be corrected and has cost our school district valuable time, money and focus.

After the mess, the Herald's executive editor at the time wrote that the newspaper's First Amendment obligation is "to present the broadest range of perspectives and opinions in its news and opinion pages. But a newspaper also has an obligation to protect its readers from the outrageously offensive or the egregiously insensitive."

If such an obligation exists at a privately funded newspaper, certainly Miami's public officials have a responsibility to assure taxpayers aren't forced to subsidize racism, anti-Semitism or communism with public dollars.

Likewise, taxpayers shouldn't have to foot the bill for entrenched and misguided bureaucrats who want to whitewash the horrors of life under Fidel Castro and his brutal regime.