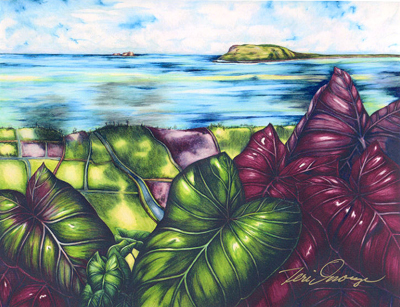 Hawaiian activists and farmers are that the University of Hawaii (UH) give up its patents on three lines of taro whose lineage extends back to Polynesian taro first brought to the Islands centuries ago. The University was granted U.S. patents on the varieties in 2002, and has also sought world-wide patent rights.

"UH needs to show more respect for native Hawaiian culture," activist Walter Ritte told the press last March. "Hawaiians would never dream of patenting or genetically manipulating kalo (Taro is known as "kalo" to native Hawaiians). Kalo is a gift handed down to us by our ancestors. Hawaiians believe kalo is the first born (named Haloa), and is our elder brother. We have a Kuleana or responsibility to honor, respect and protect Haloa, so he in turn will sustain us."

Big Island educator Ku Kahakalau says, "Taro is a sacred plant to us. It's believed to be a body form of the Hawaiian god Kane.

They are far from alone in their opposition to the patents.

Farmers are concerned that genetically engineered taro would be patented and that they might have to pay a license fee to grow it.

"As a farmer, I strongly object to patents on taro or any other crop," Hanalei taro farmer Chris Kobayashi says in a press release from the Center for Food Safety. "Why should farmers have to pay for huli? Our taxes have helped to fund UH. Some of us have been cooperators with UH on different taro research programs including breeding, cultivation and diseases. More importantly, how can anyone claim ownership of plants that have evolved and been selected or bred by farmers for specific environmental conditions and desirable properties over generations?"

The article below is from KHON (Hawaii).

Protestors lock UH regents out of board meeting
Manolo Morales

They tried to assure that, by locking Uuniversity of Hawaii regents out of their board meeting. The drama ended peacefully, but the battle is far from over.

The protest at the John Burns School of Medicine in Kakaako started out much like other protests by native Hawaiian groups.

But it took a different turn when protesters locked the two main doors to the building. It's symbolic because another door was left open. But they made their point. The UH Board of Regents was holding its monthly meeting on Thursday. Protesters led by Walter Ritte are frustrated that they're not being heard. They want UH to drop its patents on several lines of taro. They believe that native Hawaiians are descended from taro, so owning the patent is like owning their ancestors.

But the university says the patents are meant to protect taro. If UH drops the patent, someone else can step in.

"If we walk away from these patents they're worried about Monsanto or some other company coming in and taking them, and they're gonna be in an even less advantageous position. What I want to do is protect this," says Gary Ostrander, UH vice chancellor for research.

"Skay so you have your excuses," says Ritte.

"No, it's not an excuse, Walter," argues Ostrander.

"It is excuses!" says Ritte.

Board of Regents chairwoman Kitty Lagaretta agreed to sit down with Ritte to find a solution. But Ritte refused until the patents are dropped.

"If you cannot drop the patent then there can be no talking, simple as that," says Ritte.

The lockout delayed the regents meeting about a half hour. Then the protesters backed off.

"Right now we're lifting the kapu so it's noa, everything is free and open again," says Ritte.

Ritte says if UH does not drop the patents, the protests will get louder. UH issued a statement saying it recognizes taro as something sacred and it wants to resolve the issues surrounding it.
Posted by Oread Daily at 11:10 AM