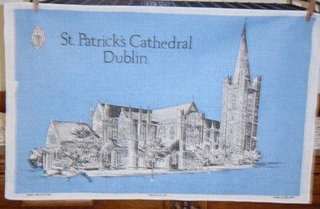 Most of the 41 hunger Afghan strikers at St Patrick's Cathedral who are demanding asylum in Ireland have agreed to drink water after moves began to arrange talks with officials from the Department of Justice. Still seven of the protestors were taken to hospital today suffering from severe dehydration.

The Taoiseach has said the Government will not give in to threats.

Some of the group have been denied refugee status in Ireland and are protesting over the length of time being taken to hear their appeals. Others are applying for the first time.

The following report comes from Ireland On Line.

A group of Afghan asylum seekers vowed today to starve themselves to death unless they are allowed to remain in Ireland despite Justice Minister Michael McDowell’s insistence that they cannot stay.

Thirty-three men began refusing food and water at St Patrick’s Cathedral in Dublin yesterday afternoon and were joined by eight others today.

They insisted they will die one by one unless they are granted political asylum.

Osman Hotok, 27, spokesman for the group, said the men fear being tortured if they are sent home.

“There are reports of politically motivated or extra-judicial killings by the government or its agents,” Mr Hotok said.

“For example, torture, official and punitive, poor prison conditions, abuse of authority by regional commanders, trafficking in persons and abuse of workers and children.

“The refugee applications commissioner has not given full attention to us and unlawfully refused most of our asylum applications.

“We will remain on hunger strike until somebody could come forward to guarantee us that we will get political asylum or we will die one by one.”

The group, which includes seven teenage boys, were visited by Church of Ireland Archbishop of Dublin Dr John Neill. The clergyman pleaded with the men to drink water, and the men have said they will consider this.

A 17-year-old boy who began the hunger strike yesterday was taken to hospital after a few hours without food. It is believed he has a kidney complaint.

Another of the failed asylum seekers, Sultan Kabir Chakari, a 45-year-old blind man from Kabul, fears that he will be persecuted if returned. He said he will be tortured in Afghanistan because of his role as an official in the Foreign Ministry under the Taliban regime.

Justice Minister Michael McDowell urged the asylum seekers to call off their protest and insisted he would not negotiate with them.

“We don’t deal with people in the lump so to speak, we deal with every individual case.”

Mr McDowell said the Irish Government had developed a complex immigration system which was suitable to deal with asylum applications.

He said asylum seekers had been returned to Afghanistan in the past.

“I would just ask the public to bear in mind that although there are disturbances in Afghanistan, that doesn’t mean that anybody has the right to come and live in Ireland,” he added.
Posted by Oread Daily at 3:20 PM

Anonymous said...
This comment has been removed by a blog administrator.
5:00 PM

Anonymous said...
This comment has been removed by a blog administrator.
5:12 PM

die not on your life. Don't give McDowell.