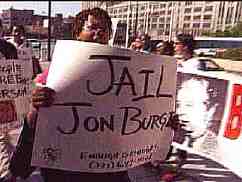 The United Nations says an investigation into police torture in Chicago needs to go further.

In 1987, Chicago Police Detective Robert Dwyer bragged to his sister Ellen Pryweller, “I can make anyone confess to anything.” He wasn't just blowing smoke.

The repeated practice of torture by Chicago police came to light in the late 1980s and early 1990s. The People's Law Office, an activist firm, conducted an investigation and identified sixty-five suspects who were tortured by Commander John Burge or other officers and detectives between 1972 and 1991 in Areas 2 and 3.7 A report by the police investigatory agency, the Office of Professional Standards (OPS), found that physical abuse "did occur and that it was systematic....The type of abuse described was not limited to the usual beating, but went into such esoteric areas as psychological techniques and planned torture. The evidence presented by some individuals convinced juries and appellate courts that personnel assigned to Area 2 engaged in methodical abuse."

In 1993, the Illinois Supreme Court concluded that Burge and his men had carried out years of “systematic torture”. That embarrassed the city enough to force Burge into retirement.

But even after the Supreme Court’s ruling, every attempt by defence attorneys to challenge the convictions of their clients because of torture was thrown out. No criminal court judge has been willing to take the word of any prisoner over that of the police department and prosecutors.

In April 2002, anti-police brutality and anti-death penalty activists won a victory when a special prosecutor was appointed to investigate Burge.

Yesterday, a Cook County judge today ruled that details of the 2002 investigation into the allegations of police torture should be released, but one of the report's authors says it will not be available for at least another two weeks.

In a written ruling, Chief Criminal Courts Judge Paul Biebel ordered
the release of the report created by two special prosecutors he
appointed in 2002 to investigate the alleged torture of 192 black men
in interrogation rooms during the 1970s and 1980s.

Earlier in the day community activists and others opposed to the death penalty protested outside the Criminal Courts Building in Chicago, urging Biebel to release the report.

"I want to see that report. I want to see it released," said Gloria
Faye Collier, one of the demonstrators to the Chicago Tribune. "I want to see Burge and those police officers indicted."

The rally, organized by the Campaign to End the Death Penalty and the Justice Coalition of Greater Chicago, followed the release Friday morning of the statement by a United Nations anti-torture panel criticizing the four-year investigation into allegations of police brutality in Chicago as not going far enough.

Meanwhile, prisoners remain on death row following confessions forced by Burge and others on the police force through torture techniques.

The following is from Pantagraph.co.

GENEVA -- A four-year investigation into allegations of torture at the Chicago Police Department needs to go further, a U.N. anti-torture panel said Friday, calling on the United States to ensure punishment for law enforcement officials who mistreated suspects.

A report by the U.N. Committee Against Torture said the multimillion-dollar investigation into the alleged torture of 192 black men in interrogation rooms during the 1970s and 1980s was "limited" and not yet led to any prosecutions.

Allegations include officers using suffocation techniques, such as placing a typewriter cover over a suspect's head, along with electric shocks, beatings and mock Russian Roulette to elicit confessions.

The investigation in Illinois has stemmed from a decision by Cook County's Chief Criminal Court Judge Paul Biebel to appoint special prosecutors Edward J. Egan and Robert D. Boyle to look into claims of torture by a violent crimes unit led by former Chicago Police Lt. Jon Burge. Burge has denied any misconduct but was fired in 1993 for mistreating a suspect. The investigation has cost $5.5 million.

Biebel ruled Friday that a report stemming from the investigation should be released to the public, but he did not specify exactly when. He scheduled the next status hearing for June 2. Attorneys for some police officers involved in the case have argued against the release of the report.

It is unclear whether the investigation will lead to indictments. Statutes of limitations could be an issue because some of the allegations date from the 1970s.

The U.N. committee says the United States "should promptly, thoroughly and impartially investigate all allegations of acts of torture or cruel, inhuman or degrading treatment or punishment by law enforcement personnel and bring perpetrators to justice."

The committee is a panel of 10 independent experts who review nations' compliance with a 1984 global convention establishing a broad ban on prisoner mistreatment.

The U.N. report also criticized American policies in its war on terrorism, and said U.S. authorities are failing to protect prisoners held in domestic prisons against acts of sexual violence. It also called for the U.S. to improve conditions for women and children under custody.

Fernando Marino Menendez, an expert from Spain who chairs the committee, said the U.S. government needed to provide more information on what it was doing to ensure justice for people claiming to have been tortured by Chicago police.

U.S. authorities should inform the committee "if they have already found out some problems about police brutality and torture in Chicago, about which nothing has been done for some time," Marino Menendez told reporters.
Posted by Oread Daily at 12:39 PM