It is Theoretical Weekends and if you are not up for another long post, I would advise you to move right along.  As the introduction to this atlibcom.org says,

"This text is effectively a summary of the arguments in Empire, in particular Negri & Hardt’s contention that Marx’s conception of class struggle is obsolete and that globalisation can be understood as capitalism's response to class struggle (7,000 words)."

by Michael Hardt and Antonio Negri

In our book[1], we propose a single concept, Empire, which is meant to name the political form of globalisation. Our primary question is, what is the political constitution of global order?

We use Empire to name the new form of sovereignty, a new form of political rule. Many argue that the globalisation of capitalist production and exchange means that economic relations have become more autonomous from political controls, and consequently that political sovereignty has declined. Some celebrate this new era as the liberation of the capitalist economy from the restrictions and distortions that political forces have imposed on it; others lament it as the closing of the institutional channels through which workers and citizens can influence or contest the cold logic of capitalist profit. It is certainly true that in step with the processes of globalisation the sovereignty of nation states, while still important, has progressively declined. The primary factors of production and exchange - money, technology, people and goods - move with increasing ease across national boundaries; hence the nation state has less and less power to regulate these flows and impose its authority over the economy. Even the most dominant nation states should no longer be thought of as supreme and sovereign authorities, neither outside nor even within their own borders. The declining sovereignty of nation states, however, does not mean that sovereignty as such has declined! Throughout the contemporary transformations, political controls, state functions and regulatory mechanisms continue to rule the realm of economic and social production and exchange. Our basic hypothesis, then, is that sovereignty has taken a new form, composed of a series of national and supranational organisms united under a single logic of rule. This new global form of sovereignty is what we call Empire.

Posted by Oread Daily at 2:25 PM No comments:

LET'S SAY YOU GET SENT TO PRISON, KNOWING YOU DIDN'T DO NOTHING 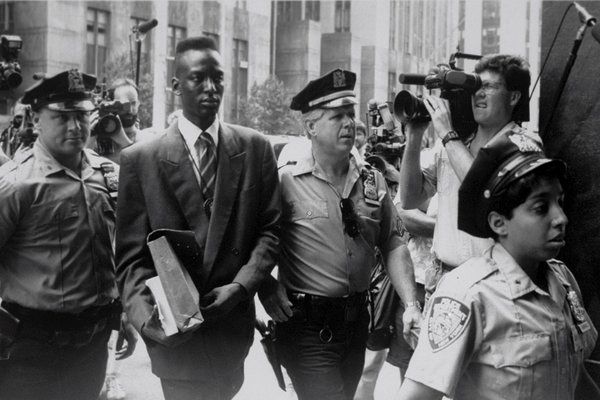 The following post for Prison Friday at Scission comes from YCteen.

Growing Up Behind Bars

Yusef Salaam on rebuilding his life after a false conviction

Yusef Salaam was one of the five teenagers falsely convicted in the brutal rape of a white woman in Central Park in 1989. The convictions were overturned in 2002, when a serial rapist confessed to the crime, but Salaam had already served his full 5½-year term in prison. Recently, I had the opportunity to interview Salaam about his experience and the impact it had on his life.

In person, Salaam carries a dignified, purposeful, and positive aura. He seems to be using his situation as an opportunity to help youth by sharing his message with them.

www.ycteenmag.org
In the course of our interview, he touched on the point that when he was exonerated, the media coverage was insignificant in comparison to the press coverage leading up to the conviction. But the documentary The Central Park Five, which chronicles the case (see the review here) has given Salaam and the others a chance to finally share their story. Here’s more of what he had to say.

YCteen: You were 15 at the time. You had no record and had never been arrested. Did your naïvete about the tactics of law enforcement play a role in your being charged with this crime?

Yusef Salaam: None of us really knew what Miranda was back then. [Miranda rights refer to your right not to incriminate yourself after being arrested, including the right to remain silent and the right to an attorney. An officer must make sure you understand these rights.] You don’t feel like you have the right to remain silent—you feel like, “If I don’t say nothing, those guys are going to do something bad to me.”
I’m not only talking about the five [of us kids] but also our parents. Some of our parents hadn’t even known anything about the system. Some of them were seen on videotape seeming like they were agreeing with the process that their sons were going through, these false confessions.
And unfortunately all of us were led to believe that if we just said we did it, we could go home. People who know the law, they know that’s crazy. But when you beat people down for 12 hours, 36 hours, don’t give them food, drink, you get them in this delirious state.

YCteen: What role did the media play in your conviction?
Salaam: I think it was such an attractive case, the way the media was spinning everything—these people from the darker enclaves are emerging out into society and they’re hunting for folks...there was this colorful language that they had to describe us, like a “wolf pack,” and it played to the fears that people had.

Many people, even in the black community, bought into the lie because many of them had been hurt by people who looked like them. I think it was easy for people to assume the worst rather than assume the best. No one had ever heard of us before so it was easy for them to say, “This is who these guys are.”
The worst part about it is because of the way [the media and law enforcement] went after us, the intensity with which they went after us, this allowed for the real perpetrator to continue to hurt folks, and ultimately one of his victims he murdered.

YCteen: How did prison affect your life?
Salaam: It’s one thing to go to jail knowing you’ve committed a crime. But to be a young person having never done anything wrong and get placed in this system...everything we knew was taken away. We were put in the worst prisons they could possibly find. I went to a maximum security youth facility and people were getting maimed, people were getting hurt, stuff I can’t even describe, and that would go on daily.

It takes so much from you, and that is one of the reasons a lot of people come out of prison really scarred. They come out with post-traumatic stress syndrome, some can’t even function in society anymore. It’s a wonder that we’re doing a little bit OK. But the indelible scars that prison left on us are there, all the time.

YCteen: You completed your prison term and were released before you were exonerated. What was it like trying to get your life back on track?

Salaam: Trying to get back into the community is extremely hard. The years they took us out of society were the years we grew and developed and learned how to be adults. And we were put in a place where we had to learn how to survive. Forget learning to be an adult. Forget learning how to balance a checkbook or drive a car, we had to learn how to stay alive the next day. A lot of us came home to that same reality.

You adapt to [the violence of prison], you learn that that’s your reality and that’s what you do for years upon years. So to come out of that....That post-traumatic stress is there. It’s a struggle.
This wasn’t just a 5 to 10 year sentence, this was a death sentence. What I mean is, if we survived prison, we weren’t supposed to survive on the street after prison. We were supposed to come back through that revolving door because you can’t take it [on the outside].

image by YC-Art Dept
We were also labeled Level 3 sex offenders, and that meant we were going to have to register [with law enforcement] for the rest of our lives. In society, every door would be slammed in our faces.

YCteen: Twelve years after you were convicted, the real perpetrator came forward and confessed, and you were exonerated in 2002. What was that like?

Salaam: Being officially exonerated was exhilarating. But the public didn’t start viewing us differently until after this film [The Central Park Five] came out. News of the exonerations was quickly swept under the rug, so some folks who never saw this film [still] think we got free from prison because of some technicality, and that we were really guilty of the crimes.
The great thing this film is doing is causing people’s minds and hearts to change. It’s the same story that’s been [told before]. The difference is, now we’re talking about what happened in the process of obtaining those video confessions. We’re talking about what happened to us through this whole process. We’re talking about trying to get our lives back together. And that is changing a lot.

YCteen: Do you feel bitter about what happened to you?

But if you hold bitterness inside it’s going to kill you, so better to take that energy and try to do something productive. Some of us got our college degrees in prison; that was a step toward saying at least when we get out of this we might have some type of future.

YCteen: What can young people today learn from what you went through?

Salaam: People always say, “You shouldn’t talk to the cops, don’t say nothing.” But you can’t not say nothing, because they have tactics and skills that will cause you to say something. Instead, you should ask for a lawyer. Make that your mantra. They’re going to try to make you feel like, “Why do you need a lawyer—did you do something wrong?” But it’s your right to have a lawyer.

Know Your Rights
If you’re stopped by the police:
• Stay calm and be cool.
• Don’t physically resist.
• Don’t run!
• Give your name and address, but you don’t have to give any other information.
• Try to remember the badge number, name, and a physical description of the cop(s) who stopped or arrested you.
• When cops stop you, ask bystanders to stand at a discreet distance and observe the police without interfering.
If you’re arrested:
• Once you are told you are under arrest, give your name and address; give your parents and/or employer’s name, address, and telephone number. (This information is needed in setting bail.)
• You have the right to remain silent. Besides giving the above information, only say, “I want to talk to a lawyer.”
• Don’t talk to the police, on videotape, or to a District Attorney about anything that has to do with the crime you are arrested for. Do not sign anything.
• Do not talk to inmates in jail about your case.
If you are 16 or younger:
• Cops can stop you if you are hanging out during school time or if they suspect that you are a runaway. That means any time they want to.
• Always carry ID, otherwise the cops will use your lack of identification as an excuse to take you in.
• If the police arrest you, they must notify your parents!
• If you are arrested, you have the right to make one call to your family or lawyer.

Provided by the Malcolm X Grassroots Movement. For more information go to mxgm.org or call the New York chapter at 718-254-8800.
Posted by Oread Daily at 4:26 PM 2 comments: