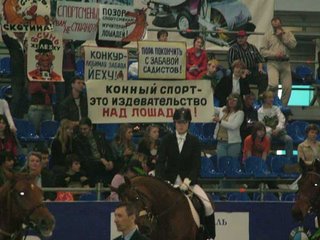 A week and a half ago the 8th International Salon “Ipposfera” was opened in St.Petersburg which included the All-Russian equestrian jumping competition took place. This is a large scale competition with a great prize fund. And for the first time in history such an event was accompanied by a mass protest action against the equestrian sport. This action was organized by the Horse Revolution Association.

Since I live with a rescued racing greyhound I can appreciate this bit of news.

The following little ditty is from Horsetalk.

The writing on the posters included: 'Get that metal in YOUR mouth!'; 'Sportsmen, aren't you ashamed?'; 'Shame on sportsmen - horse torturers!'; 'Show-jumping is the favorite fun of yahoos. It's time to stop this sadistic fun! The equestrian sport is horse torturing and humiliation!'

A large Russian showjumping competition was marred recently by a mass protest against equestrian sport. The action was organised by the Horse Revolution Association at the 8th International Salon "Ipposfera" in St Petersburg.

A huge billboard saying "Aren't you ashamed?" was installed in front of the main pavilion of the exhibition. The protesters say it "drew public's attention to incalculable suffering that horses have to endure in the mincing machine of the equestrian sport".

The protest action attracted attention of the leading part of Russian mass media, many television channels showed later reports about it.
Posted by Oread Daily at 2:18 PM