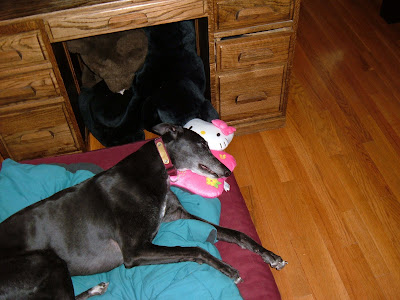 THE OREAD DAILY WILL BE SHUTTING DOWN FOR A COUPLE OF WEEKS OR SO. STAY SAFE OUT THERE...AND GET SOME REST.
(pictured here is my friend and Oread Daily co-publisher Whitney the greyhound catching some badly needed zzzzzzzsssss)
Posted by Oread Daily at 12:48 PM No comments:

THE RIGHT TO FOOD IS AN INALIENABLE HUMAN RIGHT 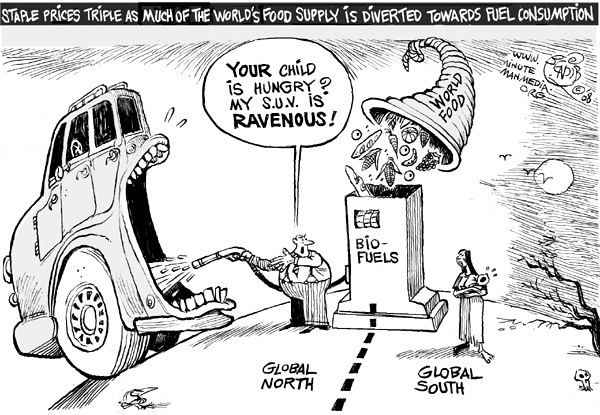 Finance ministers from the G8 countries met on 13 and 14 June in Hokkaido, Japan to discuss the current state of the global economy. The group expressed "strong concerns" about soaring crude oil and agricultural commodity prices, issues that are also high on the EU's current political agenda.

They "focused" also on the global food crisis.

Don't hold your breath waiting for a great plan from the developed world. That's what some protesters from around the world said last Friday at a protest in Brussels.

The fact of the matter is that it is the policies of the powerful that are causing the crisis in the first place.

Haiti used to produce most of the rice that its population ate. Then, in 1995, the World Bank and IMF made it open its markets to cheap imports and the country was flooded with cheap rice from the US. Now it import 80% of its rice. When prices rocket, as they're doing now, and poor people spend 50-80% of their income on food, it doesn't take a genius to work out what will happen.

Haiti has seen some of the worst food riots in recent months. More than half the population is malnourished while an estimated 830,000 jobs have been lost in recent years, primarily in agriculture.

Another example of the irony of it all comes from another a different food crisis conference earlier this month in Rome (these conferences are becoming all the rage). At the Rome conference the head of the World Bank, Robert Zoellick, spoke about the importance of helping small farmers in developing countries (forgetting to mention that his organisation has helped to put a lot of them out of business over the last 20 years).

Let's not forget a large percentage grain production now goes into making biofuels. Subsidies worth $11-12 billion for biofuels were used to divert 100 million tons of cereals from human consumption in 2006. Why? Because it would help "fight climate change." However, the carbon footprint of the developed world shows no sign of decline as a result. There is in fact little evidence that biofuel production does anything to help out in the fight against global warming. Actually, quite the contrary.

An editorial in the Appeal-Democrat (California) states:

"To continue these subsidies in the wake of the current food crisis is indefensible on economic and humanitarian grounds. Eliminating them for a few years at least would be the single most constructive thing developed countries could do to alleviate food shortages. Yet the U.S. and Europe — joined by Brazil, which has a huge domestic industry in ethanol from sugar cane — stubbornly refused to reconsider their policies."

In other words, a large part of the mess that agriculture is today is the result of the developed world's policy, the policy that puts profit above everything else.

Venezuela's ambassador to the Food and Agriculture Organization of the United Nations, Gladys Urbaneja Duran, told delegates at the Rome conference that the current food crisis is "the biggest demonstration of the historical failure of the capitalist model".

José Ramón Machado Ventura, vice president of Cuba’s Councils of State and Ministers, summed it up this way in Rome:

"The world food crisis is not a circumstantial phenomenon. Its recent appearance in such serious form, in a world that produces enough food for all its inhabitants, clearly reveals that the crisis is systemic and structural."

...the countries of the North bear responsibility for the hunger and malnourishment of 854 million people. They imposed trade liberalization and financial rules that demanded structural adjustment on a world composed of clearly unequal actors. They brought ruin to many small producers in the South and turned self-sufficient and even exporting nations into net importers of food products."

The governments of developed countries refuse to eliminate their outrageous agricultural subsidies while imposing their rules of international trade on the rest of the world. Their voracious transnational corporations set prices, monopolize technologies, impose unfair certification processes on trade, and manipulate distribution channels, sources of financing, trade and supplies for the production of food worldwide. They also control transportation, scientific research, gene banks and the production of fertilizers and pesticides."

He also cited this truism, "The right to food is an inalienable human right."

The following is from La Via Campesina.

EU in bed with hunger profiteers : Dying for money

The farmers organisations and social movements CPE, COAG and Seattle to Brussels Network staged a symbolic action in Brussels on Fiday the 13th of June, 2008, to denounce the EU involvement in the corporate profit over the food crisis.

Last week in Food and Agriculture Organization (FAO) conference on food security, the EU promoted more free-trade by concluding the Doha Round, fuelling cars instead of feeding people and more pesticides and fertilizers.

Over the last years, these so-called « solutions » have lead to more profits for the big agribusiness corporations and more poverty and hunger for the people.

These figures are for just three months at the beginning of 2008.

+ 100 million people, reaching one billion hungry people in the world (1/6 of the world total population)

Meanwhile, local markets are being destroyed and land, water and seeds are being privatized, preventing peasants and small-scale farmers to supply their communities with appropriate food.

Small-scale food producers are able to produce healthy food for everybody. They supply local markets all over the world, while cooling down the earth and protecting biodiversity. For them to continue to do so and prevent further food crisis, we need market regulation and agrarian reform, we need food sovereignty.

The Canadian Association of Petroleum Producers is holding an Oil and Gas Investment Symposium in Calgary from June 16-18. The event brings together over 85 companies and 375 investors from Canada, the USA, and around the world - many of these folks are big funders in the Alberta Tar Sands, with others looking to expand into that market.

Today, on the first day of their meeting, they had some unwelcome guests.

Activists from the Alberta Environmental Network (AEN) showed up to tell the big shots they are not thrilled with what development of the oilsands is having on the water they drink.

They offered to share their water with those at the meeting. Their were no takers.

Members of the Athabasca Chipewyan First Nation and the Mikisew Cree First Nation joined AEN at the demonstration..

Community members of the Athabasca Chipewyan First Nation, located downstream from Alberta's tar sands, continue to experience high rates of rare cancers and auto-immune diseases they believe are linked to the development of the tar sands.

"Investors need to know that our land, our lakes and our people are being poisoned by tar sands development so they can decide, with full disclosure, if they still want to put their money in a human rights and environmental nightmare," said Lionel Lepine, a member of the Athabasca Chipewyan First Nation.

"The tar sands have become Canada's ever expanding black hole and by the end of this conference we're hoping investors see that the same hole will sink their money," said Leah Henderson of ForestEthics.

"While people living in communities downstream from tar sands developments continue to experience devastatingly high rates of rare cancers, while Alberta's lands and waters are contaminated with cancer-causing toxins and are transformed from pristine Boreal forest into what former Alberta Premier Lougheed refers to as a "moonscape," investors in the industry and corporations continue to make record profits. Just weeks after 500 ducks died landing on a toxic tailings pond in Alberta's tar sands region, and Alberta Premier Ed Stelmach announced his government's intention to launch a $25 million advertising campaign to depict Alberta as an "Environmentally-friendly" province to the rest of the world, investors in the most destructive project on Earth are gathering to promote their interests and ensure the tar sands continue to expand, at the expense of the environment and the health of downstream communities!"

Oilsands are deposits of bitumen, a molasses-like viscous oil that will not flow unless heated or diluted with lighter hydrocarbons. They are contained in three major areas beneath 140,200* square kilometres of north-eastern Alberta - an area larger than the state of Florida.

Tar sands oil is sent to the U.S. Midwest and Rockies for upgrading and refining. U.S. refineries are proposing major expansions to handle promises of larger supplies. Last summer the BP refinery on the shores of Lake Michigan created a public uproar when its plan for tar sands expansion included dumping more pollutants into the Lake.

In addition to the problems of torn up forests and toxic lagoons, the process for making the synthetic crude produces three times the greenhouse gases per barrel as conventional oil production.

The respected Pembina Institute in a report released today says Alberta should not approve more oilsands refineries near Edmonton until the province has a solid plan to limit the fresh water they will use and to better manage the pollution they will produce.

The Institute says nine upgraders are expected to begin operating northeast of the capital between 2015 and 2020.

The Oilsands Fever report says together they will consume 10 times as much water as the City of Edmonton each year and spew 45 megatons of greenhouses gases - the same amount that 10-million vehicles produce.

The following is from 660 News.

Protesters converged on a downtown hotel Monday, trying to bring attention to the effects of the oilsands on their drinking water.

About 40 members of the Alberta Environmental Network staged the demonstration near the investor's symposium hosted by the Canadian Association of Petroleum Producers.

The Network is made up of members of the Sierra Club, Greenpeace and other environmental groups. Representatives are arguing that development of the oilsands should stop because it is affecting the quality of water, air and land in their area, and that in turn is impacting the health of the residents.

Protesters were inviting investors to take a drink of water from their local river; however, by the end of the demonstration, not one person had taken them up on the offer.
Posted by Oread Daily at 3:32 PM No comments: