Due to laziness, there will be no Oread Daily until after Labor Day.
Posted by Oread Daily at 11:46 AM No comments: 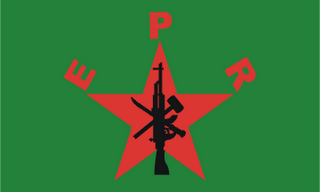 The Popular Revolutionary Army (EPR) on Saturday warned the Mexican government that peaceful protests can easily become an armed uprising. The Mexican guerilla group, based in Guerrero and Michoacán, called earlier this month for "armed defense" and "political action" against president-elect Felipe Calderón. The EPR asserts that current president Vicente Fox, of Calderón's party, is "shuffling" the situation to allow the "imposition of the extreme right" through Calderón, and it says that Andres Manuel Lopez Obrador is the victim of a "fraud."

The following article comes from the Spanish News Agency EFE.

Oaxaca, Mexico, Aug 26 (EFE).- The Popular Revolutionary Army (EPR), an armed group which first appeared in Mexico 10 years ago, warned the government Saturday that when peaceful protests fail, an armed uprising is the only alternative.

"Military action is the last resort when the forms of peaceful protest fail, and in politico-military action we acknowledge that it will be the people's organizations that determine the cause and development of the fight to achieve complete freedom," the EPR said in a communique.

The armed group appeared on horseback on Aug. 28-29, 1996 in the tourist center of Huatulco in the southern state of Oaxaca, carrying out armed attacks on police facilities.

Later the EPR broke into the central plaza of Tlaxiaco in the Mixtec region, where two people suffered gunshot wounds.

In its communique the guerrilla group recalled its 1996 military action which took the lives of 29 police and military men and eight guerrillas, and left about 20 wounded.

The text also referred to the presidential elections and to the conflict set off by the accusations of leftist leader Andres Manuel Lopez Obrador that fraud took place in favor of the conservative ruling party candidate Felipe Calderon.

The ruling National Action Party and the opposition Institutional Revolutionary Party "have decided to maintain the electoral fraud, to establish fascism in our country, to surrender our people's sovereignty to foreigners, and that is the future that obliges us to fight to stop fascism in its tracks," the communique said. With regard to the labor conflict led by teachers in Oaxaca, the group said that "the attempts at provocation by the government of (state governor) Ulises Ruiz against the popular movement will not succeed." In the same tone the communique said that "the people have to continue resisting, getting organized and standing firm" until the their demands are met and the governor of Oaxaca is driven from power.
Posted by Oread Daily at 12:08 PM No comments: