TENT CITY VOWS TO FIGHT ON TO SAVE "PRICELESS ECOSYSTEMS" 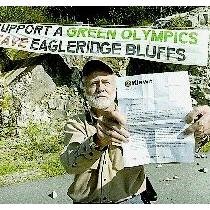 The British Columbia (BC) Ministry of Transport is proposing an expansion of the Sea-to-Sky highway 99. This expansion threatens Eagleridge Bluffs in West Vancouver.

British Columbia's provincial government's plan for a 2.4 km overland highway for the first section of the Sea to Sky highway improvement project will destroy a priceless ecosystems, recreational hiking trails, and the visual beauty of one of the Lower Mainland’s most important gateways. A 4-lane highway would devastate Eagleridge Bluffs, the Larson Creek Wetlands and the Baden Powell Trail. This is an area that the Canadian government has identified as having the two most sensitive ecosystems in the entire Sea to Sky corridor. It is the gateway to the Sunshine Coast, Vancouver Island, Sea to Sky country and Whistler.

Alternative plans which preserve all this and are much safer than the overland route have been presented by those opposed to the government's idea. One plan envisions use of a tunnel while another would simply add a third lane to the existing 3 km of highway, from Lions Bay to Sunset Beach. Both plans are a very viable, low-impact option, which would likely save the taxpayer over 100 million dollars.

The BC Government, including the Ministry of Transportation, has fed a great deal of misinformation to the people of BC, Canada and the world about the impact to the environment, recreation and visual values, the cost and the safety of a 2.4km overland highway route versus a 1.4 km four lane divided tunnel. Adding a third lane to the existing 3 km of highway, from Lions Bay to Sunset Beach, is also a very viable, low-impact option, which would likely save the taxpayer over 100 million dollars.

The government's plan has met opposition from the BC Ministry of Environment (WLAP), Environment Canada (Canadian Wildlife Service), the Ministry of Transportation’s consultants (Robertson Enviro Services) the Mayors and Councils of North and West Vancouver, the Greater Vancouver Regional District and thousands of residents.

Yet the government continues to stand by it's hasty, ill-conceived decision.

The 2010 Winter Games will be held in and around Vancouver, British Columbia. The destruction of this environment (largely for those Olympics) breaks BC's Premier Gordon Campbell promise of a "Sustainable Olympic Games, the greenest games yet”.

The article below is from the Vancouver Sun.

WEST VANCOUVER - Protesters say they will continue to occupy their tent city at Eagleridge Bluffs today despite being told Monday by a B.C. Supreme Court judge to stop blocking construction of the $600-million highway expansion through a forested area above Horseshoe Bay.

"There are many people who are ready for civil disobedience and, hey, it's an honourable thing to do as we all know."

Transportation Minister Kevin Falcon said construction will resume this week and that an enforcement order will be sought from the court if the occupation continues.

"If they continue to block construction, they will be in open contempt of a court order," said Falcon.

"There are serious consequences in doing so and they should govern themselves accordingly."

Perry said the Eagleridge protest is in the tradition of dissent that includes Martin Luther King and the civil rights movement in the U.S. and the struggle by women for the right to vote.

Grist said the protest violated the provincial Transportation Act, which prohibits obstruction of construction. He granted the injunction application of Peter Kiewit Sons, the firm contracted by Victoria to build the section of road through the Eagleridge Bluffs.

Grist also rejected the demonstrators' request for an injunction to stop the project because the environmental approval process was flawed. The Eagleridge protesters want the government to build a tunnel or add a third lane to the highway rather than cut a road through the bluffs.

Grist said his decision allows for continued protest of the highway expansion plan, but that the demonstrators must not impede construction.

The judge said protesters must remain at least 25 metres from the project site and between 75 and 300 metres away when workers are falling trees or conducting explosions.

Many Eagleridge protesters were not satisfied that they will be provided areas where they can continue to demonstrate.

"They are just locations from which we can watch our bluffs be destroyed -- and this is very hard to take," said Eagleridge Coalition activist John Bannister. "At the moment my tent is there and I don't have plans to remove it."

Betty Krawczyk similarly said she won't voluntarily leave the tent city if police arrive to evict her. "They have their job to do and I have mine, and mine is to fight against the injunctions that this province is using to quell public protest dissent.

"I do know there is lot of disappointed people here who love the bluffs and would be quite willing to do whatever to protect them."

In his judgment, Grist said submissions by the coalition's lawyers failed to challenge either the legality of the transportation minister's choice of the route or the federal-provincial environmental process permitting the highway upgrade.
Posted by Oread Daily at 11:15 AM