"THE JOURNEY HOME" MARCH AGAINST HOMELESSNESS 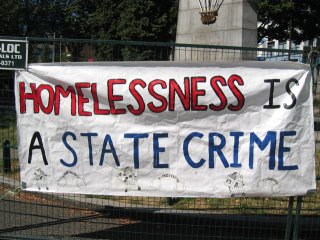 "The Journey Home," is a five-day statewide march to bring attention to the plight of Rhode Island's homeless.

While homelessness in Rhode Island has increased for each of the last five years, this years federal budget cut homeless funding for the state by 44%.

31% of Rhode Island shelter clients reported that lack of income was the primary reason they had become homeless. 17% said that the rapidly rising cost of housing resulted in their homelessness. There are many statistics to support these claims. Nearly 123,000 Rhode Island households earn less than $25,000 per year, while the rent for an average two-bed apartment is $1,121 per month. By the year 2010, an additional 24,000 jobs will be created with incomes too low to pay the rent for an average two-bed apartment in Rhode Island.

The march is being coordinated by the Rhode Island Coalition for the Homeless, the Statewide Housing Action Coalition, and People to End Homelessness, Rhode Island-based organizations focused on ending the state's homelessness crisis through affordable quality housing.

The article below is from the Providence Journal.

PROVIDENCE, Rhode Island -- Activists working to end homelessness will cross the state on foot this week, embarking tomorrow on a five-day march to bring attention to the problems of homelessness, high housing costs, and the "failure" of the housing market to end the problems.

The action, reminiscent of civil-rights marches of the 1960s, "came about through the frustration of homeless people and their advocates," said Eric Hirsch, a Providence College professor and one of the organizers of the march. "We know how to end homelessness; we just don't have the will."

Called The Journey Home, the walk will start at Westerly Town Hall and wind its way through Washington, Kent and Providence counties, essentially following Route 1. Along the way, there will be potluck dinners, sleepovers, lots of aerobic exercise and speeches, all to urge support for efforts to build affordable housing.

Hundreds are expected to participate along the way, with about 20 to 30 people walking the entire route, said Brenda Clement, executive director of the Housing Network.

Hirsch summed up the problem: more than 6,000 people, including some 1,700 children, used homeless shelters last year. Of the adults, about 13 percent had jobs.

"This march is a way of drawing people's attention to this problem," he said. "If we know how to solve the problem, then it really comes down to trying to create the will to make this happen."

Hirsch said solving the problem means building permanent supportive housing for people who need it and affordable housing for people priced out of today's market. The groups participating in the walk support a bill before the General Assembly that calls for a voter referendum on a $75-million bond. If approved, the money would help build 1,500 units of affordable housing.

The walk will culminate Thursday with a rally at 3:30 p.m. at the State House. "We hope that it will be impressive," Clement said. "We've had rallies at the State House where we've been able to attract 300, 400, 500 people, but we have never done anything of this scope."

Many walkers have registered for the event, but anyone who hasn't can just show up, said Ben Gworek of the Statewide Housing Action Coalition. Among the people who are expected to walk various segments are Warwick Mayor Scott Avedisian and Lt. Gov. Charles J. Fogarty.

Tomorrow: The march begins at noon in front of Town Hall in Westerly. There will be a rest stop at Dunn's Corners Church. The marchers will spend their first night at St. Andrew's Church, in Charlestown.

Monday: The group will leave the church at 8:30 a.m., continuing on Route 1, except for a detour for rest and a lunch break at St. James Chapel, 2079 Matunuck School House Rd. They will spend the night at Peace Dale Congregational Church.

Tuesday: Marchers will leave the church by 9:30 a.m. The daily lunch break will be at Tower Hill Park, at Route 1 and Route 138. They will spend the night at St. Bernard Church, in Wickford.

Wednesday: Providence Bishop Tobin will bless the marchers at 9 a.m., and the march will resume at 9:30, with lunch at Quidnessett Baptist Church, in North Kingstown. Mayor Avedesian in expected to join the march at the East Greenwich town line. The marchers will spend the night at Warwick City Hall.

Thursday: The last day of the march will begin at Warwick City Hall at 8:30 a.m., with a stop for lunch at Roger Williams Park at 11:30. The group will gather at Crossroads, in Providence, at 2 p.m. for a short speaking program, and then march to the State House for the 3:30 p.m. rally.
Posted by Oread Daily at 12:22 PM

I would have supported them, but they had traffic so messed up in Warwick that I was late for work.