UC STUDENTS DEMAND "NO MORE NUKES IN OUR NAME" 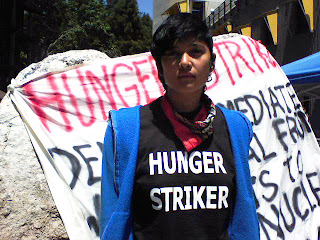 Protesters disrupted a University of California (UC) Board of Regents meeting yesterday demanding that the regents sever connections with two nuclear labs UC runs. Amonsgt those protesteing were a group of hunger strikers who have gone without food for more than a week now. The hunger strikers are demanding that the UC Board of Regents withdraw from their contracts to operate Los Alamos and Livermore National Laboratories based on, “the grounds that the Reliable Replacement Warhead program and Los Alamos Labs’ ongoing preparations to conduct plutonium pit manufacturing both clearly violate Article VI of the 1970 Nuclear Non-Proliferation Treaty.”

Santa Cruz IndyMedia reports that anchored by the Los Alamos and Lawrence Livermore National Labs and the small circle of corporations who run these and other weapons facilities for the federal government, the US nuclear weapons complex is hurriedly working to finalize designs for and to begin building a new nuclear weapon, called the Reliable Replacement Warhead (RRW).

The web site "No More Nukes In Our Name" reports at the Regents meeting:

...so many people had signed up to speak during the public comments period the regents elected to extend the time alloted from 20 minutes to a full half hour. Despite the extra 10 minutes not even close to everyone had the opportunity to have their voice heard. A number of the hunger strikers – for whom this was the ninth day without food – spoke out, as well as many supporters, including Jackie Cabasso of the Western States Legal Foundation, Professor Charles Schwartz of UC Berkeley and representatives from Physicians for Social Responsibility.

The comments were amazing to listen to. They exhibited the students’ depth of understanding of the issue with their detailed critic of RRW. They attacked the regents for continuing to choose to involve the university in the immoral nuclear weapons’ business. They conveyed the broad community support for severance. And, most importantly, they spoke of the passion and commitment of the students. One hunger striker reminded the regents that “We are not starving for fun”. Another described his aching body and then explained that the ache in his heart every time he thought about the University’s role in the creation of nuclear weapons was far greater. As he spoke the students – spontaneously – all held up peace signs.

After the public comments period everyone left the hall and gathered outside on the grass in a giant circle. One by one, going around the circle, everyone spoke. Unlike inside, there was time for everyone. Students expressed their joy of being part of this group that was fighting to steer the university towards a new, conscientious, path. They reminded each other that they – the students – were the real university; and, that they held the power to bring about a better future.

Next came the nitty-gritty, the planning. Everyone bunched up close together and, through consensus, decided how to proceed should the regents ignore the demands of their constituents and choose to continue with their regular business: the nuclear weapons business.

The group filtered back into the meeting around eleven. At first we were told that there weren’t enough seats but eventually everyone was allowed inside. We listened to the tail end of a presentation by the faculty senate which explained that the only way to maintain the quality and character of the university was increased state funding. Many in the audience were dismayed that the regents seemed unaccepting of this news.

Finally, the Committee on Oversight of the Department of Energy Laboratories convened. It was quickly clear that the regents did not intend to even acknowledge the moral quagmire they drag the university into, let alone resolving it by severing ties with the weapons labs. A group of hunger strikers stood up and demanded the regents respond to their demands. Regent Norman Pattiz assured the group that the regents had heard their message and that “[The regents] need to go forward with the business of the university.” Up on the screen was the first slide of a presentation entitled “Report on the National Nuclear Security Administration Vision for the Nuclear Weapons Complex of 2030” – i.e. the plan to revamp the nuclear weapons complex in order to restart production and create new nuclear weapons, the first of which (RRW-1) is already being designed at the Livermore lab.

The hunger strikers made it clear that so long as the regents chose “to go forward with the business of the university” when that business was creating new nuclear weapons and refused to even discuss the matter, the hunger strikers and their supporters were going to continue to demand accountability and moral responsibility from their university.

The regents brushed off the protest by saying it was not through proper channels. They seemed to think they were not responsible for nuclear weapons in any way. Someone shouted out to the regents “what would you do?” Pattiz told the hunger strikers “I hope you will go and have some lunch.” A chant of “Give Peace a Chance” was taken up by the crowd. Intermittently people would shout out things such as: “You don’t need to be a subsidiary to Bechtel.” “Listen to your students.” “The University’s business is the nuke business” “Don’t build new nukes.” Most of the chanters were still sitting peacefully in their seats, hoping the regents would at least discuss their role in nuclear complex and consider the demand for severance. Instead the regents eventually left and called in the police to clear the room. After the police announcement all, but thirteen, of the hunger strikers and their supporters left the room. The thirteen that remained locked arms and waited to be arrested.

Outside the room the energy continued with chants of “Whose university? Our university!” and “UC Nuclear Free!” as well as informal teach ins and in depth discussions of the issue. Liaisons kept in close touch with the police and a representative of the regents to keep track of the arrestees. The regents eventually resumed their meeting, but now without any public to witness it. The students moved outside the building, making themselves, and especially the hunger strikers, available to the media. A car was quickly dispatched to pick up the arrestees who were being cited and released at a nearby jail.

The hunger strikers and their supporters took some time to talk amongst themselves on the lawn behind the building. The mood was jubilant because they knew they had just exercised their power as students. But, it was also serious because the threat of nuclear weapons remains, the university continues to be part of that threat and there is still much organizing and work to be done. As everyone dispersed to return to their communities and campuses one hunger striker remarked, “I was really ready to go into the meeting, and I’ll be ready for the next one in July.”

The following is from the UCLA Daily Bruin.

SAN FRANCISCO — Thirteen audience members were arrested during the UC Board of Regents meeting Thursday after leading a protest and refusing to leave the room.

Of the 13 people arrested, 10 were students from UC Santa Cruz, UC Santa Barbara and UC Berkeley. The protesters attended the meeting to ask the regents to sever connections with two nuclear labs the University of California manages.

Some protesters said they believe an academic institution such as the UC should not be associated with weaponry research.

Students sat down on the ground and went limp when police officers tried to hand-cuff them with plastic ties, and they eventually had to be carried from the room. The board was evacuated from the room, but a number of regents re-entered to watch the arrests.

All 13 individuals were taken to the county jail in downtown San Francisco to be booked for charges of trespassing and failure to disperse, said Chris Harrington, a UC spokesman.

Darwin Bond-Graham, who participated in the protest, said he believes students had to be “disruptive and combative” for the regents to listen to their opinions, since he believes the regents have been ignoring students.

Bond-Graham said students came with the specific purpose of stopping the regents from discussing the labs. Audience members began shouting out and hissing once the discussion began, including one student who said “we want actions, not words.”

Though almost 60 individuals participated in the protest, many peacefully left the room when the police told them to leave. Several of the protesters were also participants of a hunger strike and had not eaten for nine days.

Regent Norman Pattiz told the audience that he believes the regents understood their concerns and asked them to allow the committee’s business to continue without interruptions.

“Many of us on the (Board) of Regents share your feelings and concerns in the debate that goes on in this country about the ethics of nuclear weapons,” Pattiz said.

Pattiz said the regents must talk about the nuclear labs as their duty to carry out the business of the UC. At the end of his remarks Pattiz urged the participants of the hunger strike to “go out and have lunch.” Many of the arrested students spoke during the morning’s public comment period, telling the regents of the effects of nuclear warfare, though they were each given a one-minute time limit per board policy.

“My heart aches when I think of kids that can’t take nutrients into their systems because of the cancer because of the toxins we’re putting into the environment,” said Adrian Cole, a fourth-year UC Santa Barbara student and hunger strike participant.

The regents also postponed a vote Thursday on a policy that would restrict the UC from receiving research funds from the tobacco industry. Because regent John Moores – a proponent of adopting the policy restricting tobacco funds – could not attend the meeting, the board chose to postpone the vote until July.

The policy was originally supposed to be voted on during the regents meeting this past January, but at that meeting several board members requested more time to further research the policy because of differing moral and ethical positions.

The UC Berkeley School of Public Heath banned the use of tobacco industry funding for its research in 2004.

The regents committee on compensation also presented the results of an audit that addressed past compensation practice violations and corrective actions that occurred in response.

Regent Judith Hopkinson, chairwoman of the compensation committee, called the audit a huge overhaul of procedure in order to hold the UC accountable. Hopkinson said some UC employees were given discipline for violating compensation policy, ranging from letters in personnel files to salary penalties.

The board also approved the approximately $400 million budget for the UC Office of the President for 2007-2008. This marks the first time the budget was voted on by the regents separately from the general UC budget.

Regent Russell Gould said he considers changes made to the budget, such as the separation of voting, a “work-in-progress,” since he believes the regents have an “obligation” to continually improve on budget matters.