POSADA CARRILES ON "TRIAL" IN CUBA 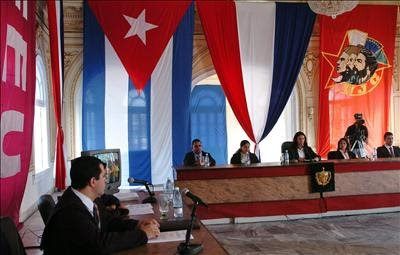 At a "trial" underway in Cuba powerful testimony marked the first day of hearings in Havana against Luis Posada Carriles and the government of the United States. Expert witnesses, investigators and relatives of the victims of the many acts of terrorism masterminded and even executed by Posada Carriles with the consent and backing of the U.S. authorities were called to testify before the prosecution in this public hearing in the José Antonio Echeverría Center in the Cuban capital.

The first person to testify reports Cuba Trabjadores was Dager Aguilar, a Cuban Law student who has carried out a thorough study of the criminal profile of Posada. He called his recent release in the United States without charges a danger for Cuba and others.

Major Misael Fonte, an expert at the Central Crime Laboratory, and First Lieutenant Yohan Lopez, a criminal investigations instructor at the Ministry of Interior both detailed the role of Posada in the mid-flight sabotage of a Cuban airliner off the coasts of Barbados in 1976, killing 73 persons.

Rosalba Alvarez Garcia blamed "Comisario Basilio" --Posada's code name when he worked for the Venezuelan secret police-- for the death of her father Ramon Antonio Alvarez and other Venezuelan revolutionaries.

Barbados leading newspaper, The Nation, in an editorial opinion stated:

To free a man like Posada Carriles, is another example of the Bush Administration's confusing position on terrorism, or is there really one?

...It seems that once you claim to be an exile from Cuba and you happen to live in or on your way to Miami, then you can commit acts of terrorism, be labelled a "freedom fighter" and live happily ever after therein. Just ask Orlando Bosch as he has been doing it for over 20 years.

Meanwhile, Prensa Latina reports that Venezuela's Foreign Minister Nicolas Maduro has confirmed his government is evaluating a possibility of taking the Posada Carriles case to the International Court in the Hague.

The following is from the Spanish News Agency ETE.

With an audience of young people and a court comprised of law students, Cuba began on Monday its peculiar "trial" of anti-Castro militant Luis Posada Carriles, a man both Havana and ally Caracas accuse of terrorism.

There is no defense team or doubt about the sentence that the court will hand down in absentia against Posada, free in a Miami safe house since last week a federal judge in Texas threw out immigration charges against him.

The Union of Young Communists, which organized the trial, has taken pains to ensure that the proceedings resemble a real trial.

Dressed in judicial robes, a prosecutor and four law students comprise the court. State prosecutors are putting on the case against Posada and two young people dressed in civilian clothing act as bailiffs and escort the witnesses to the stand.

On Tuesday, the verdict will be announced on the Anti-imperialist Platform located opposite the U.S. Interests Section in Havana, but not before investigators from assorted government entities, Interior Ministry officials, relatives of victims, journalists and youths who have prepared some "specific" presentations have taken the stand at the trial.

In addition to reviewing his training as an agricultural engineer, his lifelong love of fishing, drinking and making explosives, the witnesses and the secretary of the court, upon reading the list of charges, gave an account of all the misdeeds and crimes attributed to Posada.

"Yes, I consider him to be a danger to humanity," said one student who contributed to the "characterization of Posada" with a speech he read on the court's projection screen.

Rolando Yero, a member of the Ideological Office of the Young Communists, told Efe that the idea for the trial arose as a "response to the trial that was going to happen in the United States, that judicial farce," a reference to the proceedings originally set for May 11 for immigration fraud.

"But there wasn't any trial and because of that, the concept changed," he said.
The process begun on Monday is "strictly political," with judicial elements, presentation of evidence, real witnesses and experts with long careers of work in the investigation of terrorism against Cuba, Yero said.

"Neither terrorism nor imperialism are defensible for either the peoples of Latin America or for our people," he said in justifying the absence of defense counsel.

"There are many deeds that there is no way to defend, to justify, because they go beyond political systems, they go against humanity," he added.

Despite the unlikelihood that a Cuban court would acquit the 79-year-old Posada, Yero said that Cuba has in place the "technical conditions to provide a fair trial."
One of the first witnesses to appear was Andres Zaldivar, of the Cuban State Security's Center for Historical Research, who said that "as a professional, it's important to contribute to clarifying" the condition of Posada as a terrorist.

Zaldivar said that his testimony presented on Monday would be the same he would give at a real trial.

Along with Zaldivar, several other people were called to testify on attacks Posada is accused of, including blowing up a Cubana de Aviacion jet in 1976 killing 73 people and planting a series of bombs in Havana hotels in 1997, the blasts from which killed an Italian tourist.

All this was undertaken in accord with typical trial procedures, and the head of the court, Iala Rodriguez, warned the public that "during the working (court) sessions, there will be no talking, exclamations or demonstrations; discipline will be maintained in keeping with ... the act under way."

Venezuela is seeking Posada's extradition in connection with the 1976 airliner bombing, but a U.S. immigration judge has ruled that the Cuban-born Venezuelan citizen cannot be sent to Caracas or Havana because he might be tortured.

Posada, a former CIA operative, escaped from custody in Venezuela in 1985 while awaiting a second trial for the bombing.

In 2004, a Panamanian court sentenced Posada to seven years in prison on lesser charges in connection with the plot against Castro, but that country's outgoing president, Mireya Moscoso, pardoned him and his accomplices in August of that year.

Posada, who headed Venezuela's secret police for a time in the 1960s and 1970s, disappeared soon after leaving prison and did not resurface until March 2005 in Miami.

The Miami Herald recently reported that FBI agents traveled to Havana to investigate the 1990s hotel blasts which killed the Italian tourist and that a federal grand jury in New Jersey could indict Posada in connection with those attacks.

Cuba's government said last Friday that the release of Posada was part of a plan approved by President George W. Bush to spare the militant a trial on terrorism charges and thereby avoid his revealing "the destructive actions" he carried out in the Americas when he worked for the CIA.

Repeating earlier allegations, Havana linked Posada's activities with former President George H.W. Bush, the incumbent's father, who headed the CIA in 1975-1976 and was vice president when Washington was backing the Contras against the Sandinista government in Nicaragua.

Posada is known to have played a role in supplying the Contras, and declassified U.S. intelligence documents highlight suspicions that he was involved with the 1976 airliner bombing.
Posted by Oread Daily at 2:26 PM