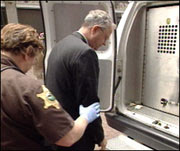 Several clergy members were arrested during a protest over wages for janitors in downtown Indianapolis Thursday afternoon. The protest near Monument Circle disrupted traffic as a group of janitors rallied for better wages and benefits.

Father Tom Fox and others from the Indianapolis Clergy Committee were arrested after blocking the entrance of the 10 West building downtown.

"We need to lend our moral voice to a really important issue which is people who work full time are still in poverty. This is one particular issue but we're addressing the broader issue here," said Fr. Fox to WTHR news.

The committee is supporting the janitors who clean the 10 West Building. The company that cleans the building is called EMS. EMS also cleans the buildings at Market Tower, the Children's Museum, IPL and others, according to Interfaith Worker Justice.

Darnale Tillman, an EMS employee, said workers have been struggling for two years to get better wages and that the company has resisted workers' efforts to form a union.

"I guess this is the message we have to take to get them to understand that the employees [need to make] proper wages. This is what needs to happen," he said.

The following is a press release from "Three Cities One Future."

Indianapolis—In a plea for dignity and economic equality, a half dozen local clergy members were arrested at Market Tower as they ramped up their support for janitors employed by Executive Management Services, a cleaning company that for two years has refused to allow its janitors to choose a voice on the job by forming a union. EMS janitors, other service workers, and their community supporters in Indianapolis, Cincinnati, and Columbus are seeking to lift themselves out of poverty through the Three Cities One Future Campaign.

“It is our calling to keep before this city a vision of God’s justice and mercy,” says Rev. Darren Cushman-Wood, pastor of Speedway United Methodist Church. “After much prayer and deliberation and after two years of meeting with decision-makers, we have to take dramatic action to safeguard basic human rights.”

Unlike other regional cleaning companies, EMS has thus far refused to allow its workers to participate in a process that will create a new economic standard for as many as 165,000 service workers in the Midwest. On March 27, janitors in Cincinnati began negotiating with their employers over a historic model contract that will initially impact more than 4,000 janitors in Cincinnati, Columbus and Indianapolis in the coming months by setting minimum standards in pay, access to health care, and working hours for janitors employed by ABM, Jancoa, Professional Maintenance of Cincinnati, Aetna Building Maintenance, Scioto Corp, CSI, and One Source. The contractors provide janitorial and other services to commercial office buildings, mall, banks, universities, airports, museums, and municipal, county, and state offices throughout the region.

The religious leaders belong to the Indianapolis Clergy Committee, which has collected more than 125 signatures from area clergy calling on business leaders to support good jobs with health care and the freedom of workers to choose to form a union. EMS provides janitorial services at well-known Indianapolis properties such as Market Tower, the Children’s Museum, Indianapolis Power and Light, and HDG Mansur. According to a complaint issued this month by the National Labor Relations Board (NLRB), EMS has illegally intimidated, threatened and interrogated janitors who support their union in the workplace.

Today’s action evidences the growing level of support enjoyed by janitors and other service workers seeking a better life through the “Three Cities One Future Campaign.” With the American Dream under fire in the Midwest, working families and community leaders launched the Three Cities, One Future Campaign earlier this year to call on the corporate leaders of Cincinnati, Columbus, and Indianapolis to support jobs that allow workers to own a home, save for retirement, and go to the doctor.

Despite being home to eighteen Fortune 500 companies and other major corporations with combined revenues of more than $1 billion per day—including Western and Southern, Convergys, and Conseco —the region’s high number of low-wage, no benefit jobs is increasingly stifling working families’ ability to lift themselves out of poverty. Ohio is the only state in the nation with two of the country’s most-impoverished cities—fully 24 percent of workers in the state earn poverty level wages—while in Indianapolis twenty one percent of the city’s workers earn poverty level wages. In particular, janitors in Indianapolis, Cincinnati, and Columbus are paid as little as $26 a day—with few paid more than $64 a day—and most have no health or other benefits.

At many junctures in our nation’s history, people of good will have courageously refused to cooperate with injustice by engaging in nonviolent protest and civil disobedience—including the Boston Tea Party, Harriet Tubman's Underground Railroad, and the fight for women to gain the right to vote.

For more information, visit www.ThreeCitiesOneFuture.org or www.DispatchFromTheFront.Blogspot.org.
Posted by Oread Daily at 3:02 PM