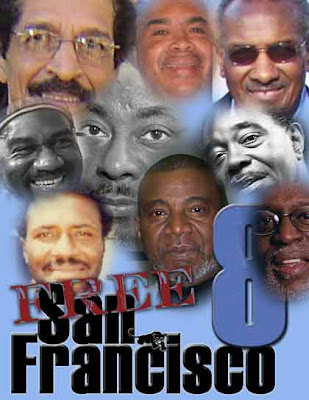 The Committee for the Defense of Human Rights states:

Eight former Black Panthers were arrested January 23rd in California, New York and Florida on charges related to the 1971 killing of a San Francisco police officer. Similar charges were thrown out after it was revealed that police used torture to extract confessions when some of these same men were arrested in New Orleans in 1973. Richard Brown, Richard O'Neal, Ray Boudreaux, and Hank Jones were arrested in California. Francisco Torres was arrested in Queens, New York. Harold Taylor was arrested in Florida. Two men charged have been held as political prisoners for over 30 years – Herman Bell and Jalil Muntaqim are both in New York State prisons. A ninth man -- Ronald Stanley Bridgeforth – is still being sought. The men were charged with the murder of Sgt. John Young and conspiracy that encompasses numerous acts between 1968 and 1973.

Harold Taylor and John Bowman (recently deceased) as well as Ruben Scott (thought to be a government witness) were first charged in 1975. But a judge tossed out the charges, finding that Taylor and his two co-defendants made statements after police in New Orleans tortured them for several days employing electric shock, cattle prods, beatings, sensory deprivation, plastic bags and hot, wet blankets for asphyxiation. Such "evidence" is neither credible nor legal.

The mission of the Committee for Defense of Human Rights is to draw attention to human rights abuses perpetrated by the government of the United States and law enforcement authorities which were carried out in an effort to destroy progressive organizations and individuals. By building coalitions with organizations and groups that advocate for human and civil rights, CDHR hopes to bring an end to these abuses. CDHR's basic principles are set forth in the Universal Declaration of Human Rights and the United Nations Convention against Torture.

On May 5, over the strenuous objection of their attorneys seven of the eight former Panthers were brought into court in shackles (a reminder of the treatment of Black Panther Bobby Seale during the Chicago 8 Conspiracy Trail almost four decades ago).

The San Francisco Bay View reports for the hearing the Sheriff’s Department had set up a walk-through metal detector, identical to the one at the building entrance. More officers were stationed at the courtroom doors, with more metal detector wands than at previous hearings. As the brothers filed into the courtroom, they still bore full wrist and ankle shackles. The courtroom was about two thirds full of observers.

The defense attorneys at the hearing stated that none of their clients was entering a plea, and a couple are filing demurrers, a legal document that challenges the legal sufficiency of the charges. The men are refusing to enter pleas because they dispute the legitimacy of the entire case, which is based on misleading and inflammatory “evidence” – confessions extracted by torture similar to the worst imposed on prisoners at Abu Ghraib and Guantanamo.

The following announcement comes from the Jericho Movement.
Next Hearing June 11, 2007

The next court appearance for the brothers will be June 11th at 9am in Department 21 at 850 Bryant Street in San Francisco. The proceedings will likely commence with individual bail reduction motions. All the brothers (except Herman Bell who still awaits a decision on his challenges to extradition in New York) looked strong and in good spirits. There will be a rally in support of the San Francisco 8 at 8am June 11th before the hearing.
Posted by Oread Daily at 2:56 PM