"IF YOU'RE NOT READY TO DIE FOR IT, PUT THE WORD 'FREEDOM' OUT OF YOUR VOCABULARY" ----MALCOLM X 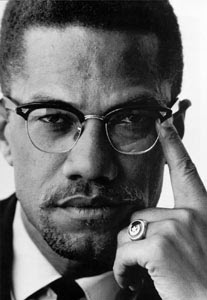 Tomorrow would have been the 82nd birthday of Malcom X. Would have been if he had not been shot dead February 21, 1965. That shooting wounded all of us who fight against racism and for social justice. We must never forget.

"Here - at this final hour, in this quiet place - Harlem has come to bid farewell to one of its brightest hopes -extinguished now, and gone from us forever. For Harlem is where he worked and where he struggled and fought - his home of homes, where his heart was, and where his people are - and it is, therefore, most fitting that we meet once again - in Harlem - to share these last moments with him. For Harlem has ever been gracious to those who have loved her, have fought her, and have defended her honor even to the death.

It is not in the memory of man that this beleaguered, unfortunate, but nonetheless proud community has found a braver, more gallant young champion than this Afro-American who lies before us - unconquered still. I say the word again, as he would want me to : Afro-American - Afro-American Malcolm, who was a master, was most meticulous in his use of words. Nobody knew better than he the power words have over minds of men. Malcolm had stopped being a 'Negro' years ago. It had become too small, too puny, too weak a word for him. Malcolm was bigger than that. Malcolm had become an Afro-American and he wanted - so desperately - that we, that all his people, would become Afro-Americans too.

There are those who will consider it their duty, as friends of the Negro people, to tell us to revile him, to flee, even from the presence of his memory, to save ourselves by writing him out of the history of our turbulent times. Many will ask what Harlem finds to honor in this stormy, controversial and bold young captain - and we will smile. Many will say turn away - away from this man, for he is not a man but a demon, a monster, a subverter and an enemy of the black man - and we will smile. They will say that he is of hate - a fanatic, a racist - who can only bring evil to the cause for which you struggle! And we will answer and say to them : Did you ever talk to Brother Malcolm? Did you ever touch him, or have him smile at you? Did you ever really listen to him? Did he ever do a mean thing? Was he ever himself associated with violence or any public disturbance? For if you did you would know him. And if you knew him you would know why we must honor him.

Malcolm was our manhood, our living, black manhood! This was his meaning to his people. And, in honoring him, we honor the best in ourselves. Last year, from Africa, he wrote these words to a friend: 'My journey', he says, 'is almost ended, and I have a much broader scope than when I started out, which I believe will add new life and dimension to our struggle for freedom and honor and dignity in the States. I am writing these things so that you will know for a fact the tremendous sympathy and support we have among the African States for our Human Rights struggle. The main thing is that we keep a United Front wherein our most valuable time and energy will not be wasted fighting each other.' However we may have differed with him - or with each other about him and his value as a man - let his going from us serve only to bring us together, now.

Consigning these mortal remains to earth, the common mother of all, secure in the knowledge that what we place in the ground is no more now a man - but a seed - which, after the winter of our discontent, will come forth again to meet us. And we will know him then for what he was and is - a Prince - our own black shining Prince! - who didn't hesitate to die, because he loved us so."
Posted by Oread Daily at 2:48 PM

Malcolm X was born on May 19, 1925. This weekend we celebrate what would have been his 82nd birthday. Please join us on the Electronic Village and share your thoughts on this African American hero. Let your voice be heard. peace, Villager