SO WHAT ENDED UP HAPPENING IN VANCOUVER, YOU ASK? 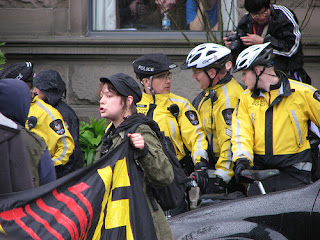 Those of you who read the story about the possible people's eviction of the Olympic planning committee up in Vancouver are probably wondering what ending up taking place. Well, the big shots didn't get tossed out.

The Globe and Mail reports opponents of the 2010 Olympics were defeated Thursday in their attempts to force their way into the headquarters of the Vancouver Olympic Organizing Committee, but are vowing to hound board members at their homes and workplaces.

Protesters planned to storm a VANOC board meeting but when their bus pulled up to the Graveley Street headquarters, the building was cordoned off with a metre-high fence and about three dozen uniformed police officers were standing guard.

The following is from the Vancouver Province.

Anti-poverty protesters vowed to "evict" Vancouver Olympic officials from their homes after their protest fizzled in front of VANOC's headquarters yesterday.

Key APC members control the board of directors of the Downtown Eastside Residents Association, a multi-million dollar social housing agency.

BC Housing is currently investigating DERA over allegations APC members have received social housing at DERA facilities despite having full-time jobs. It is alleged APC members have also jumped housing waiting lists.
The report will be completed within a month.

On Wednesday, about 30 APC protesters marched away chanting slogans when confronted by more than 50 Vancouver police and security officers posted behind a riot fence.

"What we plan on doing is targeting each and every member of the VANOC board and holding them individually responsible for what they have done to hundreds of people in the Downtown Eastside," said David Cunningham of the Anti-Poverty Committee.

Vancouver 2010 CEO John Furlong said he was saddened to hear of the personal threats to board members, who met yesterday.

"When you make people feel unsafe and there's a threat, it's unfortunate and it's uncomfortable and it doesn't make anybody feel good," he said.

He defended the decision to build the fence.

"We basically secured our facility the way we thought we should, based on what we had heard might happen today," added Furlong. "We were informed by people that they were going to try to enter the building, try to invade the boardroom."

Vancouver police spokesman Const. Tim Fanning said of the threats to board members: "They will be investigated and if there is any possibility of putting charges forward, then that's what we'll do."

He denied the show of force was an overreaction: "It always appears that way, but for everybody's

safety, we have to have what we feel is an adequate number."

Maureen Bader, the B.C. director of the Canadian Taxpayers Federation, a group highly critical of Olympic spending, said anyone who targets the homes of VANOC board members should be dealt with quickly. "We should not be spending millions of dollars to set up security around people's homes -- we should be arresting the criminals," she said.

The APC protest was planned, in part, to oppose VANOC's policy of keeping board meetings closed.

The issue of open meetings was discussed by the VANOC board but a unanimous decision was made to keep them closed to the public.

Board member Rusty Goepel, chairman of the VANOC corporate governance committee, said the decision was made because "we cannot expect to have open, candid and constructive debates in a fishbowl." dinwood@png.canwest.com
Posted by Oread Daily at 2:14 PM