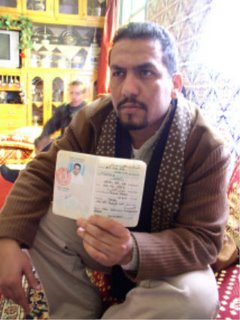 Ali Salem Tamek is a Sahrawi independence activist and trade unionist. He has grown use to rough treatment by the Moroccan authorities who run his country. He has now been denied entry into his own country.

"I wanted to get back after a trip to Goulimine, in the south of Morocco, and I was addressed by agents of security who declared t0 me that I am not allowed to get back to my country following orders from Rabat", he said in an interview with the Saharawi Service of Communication in the Canaries Islands.

Numerous human rights organizations including the Saharawi Collective of Human Rights Defenders in the Western Sahara (CDSDHSO in French abbreviation), and the Saharawi Journalists’ and Writers’ Union (UPES in its Spanish abbreviation) denounced the action taken by the Moroccon colonialists.

The Saharawi human rights activist, who was released from prison last April because of international and popular pressures, asked for "protection from humanitarian bodies" against what he considered as "a new form of repression, punishment and provocation" from the Moroccan authorities of occupation.

The following comes to us from the Shara Press Service.

Tamek expulsed from the Western Sahara: his family denounces

Assa (south of Morocco), 03/08/2006 (SPS) The family of the Saharawi human rights activist, Ali Salem Tamek, denounced the interdiction from access by the Moroccan colonial authorities against its son, who was expulsed last Thursday by the Moroccan security from the borders of the Western Sahara upon his coming from Tan Tan in company of the ex-victim of forced disappearance, Mr. Yahya Mohamed Elhafed, the Tamek Family declared in a press release, of which SPS received a copy.

The Tamek family, who condemned is decision qualifying it as a "violation of the international human rights Conventions", estimated that Morocco must assume its responsibilities about all the consequences that may result from this decision".

It also hailed the wide campaign of solidarity of the human rights organisations and the Saharawi activists that aim to unveil "the violations committed by Morocco against the Saharawi citizens in the occupied territories of the Western Sahara and in the south of Morocco".

The family of Ali Salem Tamek finally launched an appeal to all persons concerned about peace and justice for support and to exercise "pressures on the Moroccan Government to compel it put an end to the aggressions that target the Saharawi citizens, especially the Saharawi hum rights activists".

The Saharawi Collective of Human Rights Defenders in the Western Sahara (CDSDHSO in French abbreviation), and the Saharawi Journalists’ and Writers’ Union (UPES in its Spanish abbreviation) denounced the denial of access to the Western Sahara the Moroccan security services imposed on the Saharawi human rights activist last Thursday at the borders of the territory, which is occupied by Morocco since 1975, the two NGOs wrote in press releases.

The two NGOs called on Morocco to "review this decision and to open a just and transparent inquiry on the facts", expressing their solidarity with the human rights activist and ex-political prisoner, Ali Salem Tamek.
Posted by Oread Daily at 10:49 AM