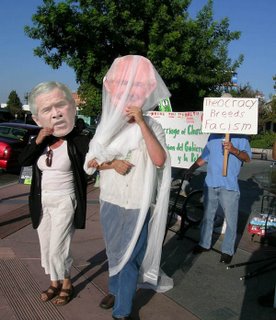 The "In God We Trust" celebration Sunday evening at Rabobank Arena in Bakersfield California turned out not to be exactly what the organizers had planned.

All was going well until volunteers for "The World Can't Wait: Drive Out the Bush Regime" walked in front of the podium and unfurled a green banner, the same one they held outside moments earlier.

It read: "No to women-hating anti-gay Christian fascist theocracy."

A man in the audience shouted, "End to theocracy! Freedom of religion!"

The report below comes from the organization "The World Can't Wait."

Braving high temperatures and a challenging political climate, demonstrators from Bakersfield, Los Angeles, and San Francisco staked out two street corners near the Rabobank Theater in downtown Bakersfield to protest the blessed union of Church and State. Four years ago, to the day, local City Councilwoman Jacquie Sullivan met victory on her home turf: the words “In God We Trust” were placed atop of the Bakersfield city seal (the conventional national motto, “E Pluribus Unum,” dropped to the bottom) and she and her allies took up a new crusade. Not long after, Sullivan founded “In God We Trust - America, Inc.,” a group intent on placing the words “In God We Trust” in civic buildings throughout the state and across the nation. Conveniently, the date aligns perfectly with the 50th anniversary of the U.S. Congress adopting the words as a national motto. Sullivan’s efforts up to now have convinced nineteen cities to display the McCarthy-era slogan.

In an interview given that evening, Councilwoman Sullivan commented on the success of the anniversary extravaganza: “It was a very faith-based, patriotic evening. It has motivated a lot of people to get involved. We plan to make a lot of progress this next year.” Such are the dressed-up machinations of right-wing functionaries in Bakersfield, and cities like it throughout the country. Allied in common deed or common cause, they support an array of issues from stacking the Supreme Court with the aid of the church (“Justice Sunday”), to petition drives to require parental notification for a minor to receive an abortion. Many uphold that America is, at root, a Christian nation with Christian values, and ultimately would love to see a Christian government take up the Bible as God’s law over man. Any hurdle they can clear on this path is cause for celebration in their camp. It’s worthy of the utmost resistance in ours.

“Religion is one thing, Theocracy’s another…The Religious Right is Wrong!”

Four World Can’t Wait San Francisco Bay Area volunteers drove five hours to meet the Bakersfield chapter, bringing with them two prize-winning banners from their Gay Pride Parade float. Each read: “No to Women-hating anti-gay Christian fascist theocracy!” Megaphones at the ready, chanting started and picked up a rhythm. The crowd in line to enter the theater stirred, and firefighters carrying out a drill on site likewise grew agitated. With signs and banners on display and chants echoing throughout Downtown, we attempted to talk to people as they headed for the theater. Some were interested and took copies of the call to read. Others questioned us on the significance of the slogan. A few shielded their children from us and quickly shuffled them away.

A large group from Los Angeles soon arrived, boosting our numbers to over twenty. More banners were in tow: “October 5th: Bring this to a Halt!” Bilingual signs also drew the attention of several families driving by the corner. A few passers-by expressed real appreciation for what we were doing. Two ladies just off work took the call, even as the volunteer talking with them was hounded and threatened with arrest. One said, “Yeah, I’d go to jail for the cause.”

Not long after the crowd picked up, site management approached and made it clear that the Theater and Arena, though owned by the city, was the temporary property of the group renting the facility. Thus we found ourselves and our banners confined to a narrow space just off the curb. As the property manager came out a second time, expressing sympathy with us, a firefighter broke from his crew and officiously marched along the sidewalk. We were soon confronted by the Bakersfield Police Department, saying that we were, indeed, blocking the sidewalk. Our envelope once again narrowed, we shuffled around our banners and continued as best we could.

Media then began to show up, only to find their scoop by surprise. A newspaper reporter and photographer worked among the crowd, and soon a TV cameraman headed to our corner, followed by two reporters from local radio stations. Their reporting brought us two minutes of local TV coverage and a front-page article in the newspaper. Our action has been a day-long feast for conservative talk radio in town, giving World Can’t Wait more publicity than we could have anticipated.

“Ban the Marriage of Church and State!”

Robertson the bride and Bush the groom: a match made in heaven. Rule without end, Amen? Activists sporting masks of the two iconic representatives of church and state, respectively, or Christian fascism taken together, joined in a mock wedding. Before Bush could wed the “good breeder” he had found in Robertson, the ceremony was interrupted by other World Can’t Wait demonstrators. We on the street called for the bond to be severed, while the crowd inside listened to Assemblyman Kevin McCarthy read a personal address by President Bush, evoking the words of Francis Scott Key: “Let this be our motto, In God be Our Trust!” The metaphorical wedding apparently was proceeding inside the theater, much as it unfolds with much less ceremony every day in this country.

Threats of citation increased as the demonstration continued, and threats of immediate arrest followed. Just after the wedding, three of our fellow volunteers from the Bay Area were seen emerging from the hall, one freely walking and the other two being held by the police, a crowd of some ten to fifteen officers and security guards. We waited, and anxiously tried to see what was happening with the two being held, while listening to a report from the fellow who made it out. Their plan to seize the occasion and chant down Bush’s address, a bold and courageous move, rapidly evolved once they were inside. In the end, amidst red and blue background lights, a lone spotlight and near pitch black throughout the hall, the two had made it on stage and unfurled the banner: “No to Women-hating anti-gay Christian fascist theocracy!” The details here are best saved for another report, but the break with the planned ceremony electrified the crowd, and won us the headline in newspaper coverage of the event. Their action has already proved controversial, even among progressives in town, but when people come to see the urgent need to confront the threat of Christian fascism before it becomes an unspeakable truth, we may find ourselves with the immediate potential to mobilize against this threat on a truly massive scale.
Posted by Oread Daily at 12:08 PM