CHINA: "WE DECIDED TO KILL THE DOGS" 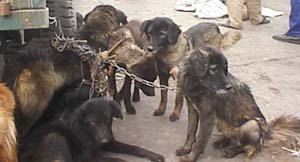 "We decided to kill the dogs," Li Haibo, spokesman of the Mouding county government said.

And so they did.

On Saturday, a woman was walking her dog - a small white animal she'd had for a long time - in a Yunnan Province alley.

Several men approached, talked her into handing them the leash and then beat the dog to death as the owner looked on in horror.

The killing, reports the Shanghai Daily, was only a small part of a campaign by Mouding County government officials to slaughter 50,000 canines between July 25 and Sunday, local media reported. The campaign was touched off by reports that at least three people had died recently in the county from rabies and many others had been bitten.

The Shanghai paper wrote of the slaughter:

Witnesses indicated the slaughter was often carried with the sort of dramatic elements found in a grade-B horror film.

Around midnight, shadows would flash along the walls of homes as men carrying clubs made noises to set the village dogs barking. Homing in on the sounds, the men would find their quarries, and the barks would be replaced by shrill yelps as the animals were dispatched.

Only military dogs guarding an ammunition storehouse and police dogs were allowed to survive.

Authorities first encouraged dog owners to kill their own pets, offering a 5 yuan incentive (62 US cents), and then sent in the task force to finish those that escaped the first-round slaughter.

The midnight raids were carried out by the task force officers.

The following report is from People for the Ethical Treatment of Animals.

China’s long history of animal abuse is back in the spotlight as one Chinese county indiscriminately massacres every dog in sight—more than 50,000 in total—some right in front of their families. This and other appalling atrocities—such as feeding live sheep and chickens to tigers in zoos and skinning conscious animals, including dogs and cats, for their fur, which is then exported to the West—take place because China has no animal protection laws.

Tens of Thousands of Dogs Are Being Clubbed, Poisoned, and Electrocuted

In a hideously cruel response to an outbreak of rabies in late July, authorities in Mouding County in Southwest China ordered the killing of more than 50,000 dogs, including 4,000 who were immunized against the disease. Officials clubbed many animals to death in the street right before their guardians’ eyes. Animals who were not beaten mercilessly died equally violent, gruesome deaths by poisoning or electrocution.

PETA’s offices have been inundated over the years with calls from people around the world who are outraged by China’s dog “exterminations.” Eyewitnesses have noted that many dogs have died slow, agonizing deaths in these mass slaughters, which illustrate the nation’s lack of adequate animal control plans. PETA’s offers to assist Chinese officials in implementing such plans—in order to avoid drastic, widespread killings—have not been accepted.

Chinese authorities pay citizens a 60-cent bounty for each dog whom they kill. Surprised that this nation places a price on the head of “man’s best friend”? Don’t be. Dogs and cats are killed for their fur in China.

It’s not just a bad dream. PETA recently conducted an undercover investigation into the Chinese dog- and cat-fur trade in order to show people what the industry is so desperate to hide. Even our veteran investigators were horrified by what they found: Millions of dogs and cats in China are bludgeoned, hanged, bled to death, and strangled with wire nooses so that their fur can be turned into trim and trinkets.

Think that’s nightmarish? If you’re buying fur, you might be wearing the skin of the very species of animals that you share your home with. Chinese fur is often deliberately mislabeled as fur from other species, and it constitutes more than half the amount of finished fur garments that are imported for sale in the United States. Because dog and cat fur is mislabeled so frequently, the bottom line is that if you wear fur, there’s no way of knowing whose skin you’re in.

With the world’s largest population of sheep, lambs, goats, and kids, China’s massive role in the global skins trade also includes its position as the world’s most prolific exporter of the hides of these animals as well as those of cows. In 2004, Chinese leather constituted more than one-third of all exported leather in the world.

Other skins come from more familiar faces. Hundreds of thousands of dog and cat skins are traded in Europe each year; it’s estimated that 2 million dogs and cats are killed in China each year in order to meet this demand.

Many of the millions of animals slaughtered for their skins are skinned alive.

Buying leather directly supports factory farms and slaughterhouses, because animals’ skins are the most economically important byproduct of the meat industry. Every time that you buy a pair of leather shoes, you sentence an animal to a lifetime of suffering. Instead, you can choose from hundreds of styles of nonleather shoes, clothing, belts, bags, and wallets. Fashion should be fun, not fatal!

Considering the fact that 45 percent of the world’s “food” animals are raised and killed in China, the nation’s notoriously cruel live-animal markets a hotbed of agony for animals.

Domestic and wild animals housed in these markets are subjected to egregious cruelty. Animals of many species—from cats, dogs, birds, and boars to deer and even reptiles—are confined to wire cages where they can hardly move. Fish are left to flail helplessly in filthy water, while turtles and frogs are crushed by their peers in extremely crowded enclosures. None of the animals are fed, and some do not receive water or shelter from the elements.

The slaughter of these animals is no less depraved. Caged dogs and cats—whether they’re killed for their flesh, their skin, or both—are jabbed with metal spikes and dropped from great heights before being bludgeoned and butchered. Crocodiles are stabbed in the neck and then skinned alive while they are still conscious, as are frogs. Turtles have their shells pulled off so that “steaks” can be hacked from their back muscles. They continue to walk around the market stall until customers have bought enough of their flesh to induce fatal hemorrhaging.

China’s lack of animal protection laws has allowed the growth of a gory captive-exotic-animal industry. Wild-animal parks have exploded in China, as nearly 30 have opened since 1993; these wild-animal parks house tens of thousands of tigers, lions, monkeys, and other animals. Many of these parks conduct live feedings of their captive tigers and lions, taking oxen, horses, sheep, cows, and pigs into the enclosures so that visitors can watch the gory spectacle. Some of these “safari” parks allow patrons to purchase live domesticated chickens, wild chickens, ducks, and small birds to feed to the animals. The big cats are kept hungry in order to ensure that they will pursue the purchased prey. One park even slaughters tigers who are no longer needed and sells their meat and “tiger-bone wine” in its restaurant.

Thousands of Bears Suffer in Agony on Chinese Bile Farms

About 7,000 Asiatic black bears—also known as Moon bears—are confined to tiny pens on China’s more than 200 bear-bile farms. Although alternatives to their bile—which some people believe has healing properties—exist, bears are still subjected to crude surgeries in order to implant catheters or to create permanent holes in their abdomens (for “free-drip” collection of this digestive liquid from their gallbladders). Many of the bears in these cruel operations are missing limbs, indicating that they were captured in the wild with snares or traps. Farmers remove their canine teeth and claws, and the animals languish for years with injuries, parasites, atrophied muscles, and peritonitis.

China’s Filthy Monkey-Breeding Facilities and Their Ties to Vivisection in the U.S.

China supplies more than half the monkeys imported to the U.S. for experiments, and that number has increased sevenfold in the last 10 years. This is particularly disturbing given reports of substandard conditions at China’s breeding facilities. After visiting China’s primate facilities, John Reid of AstraZeneca Pharmaceutical Company pronounced, “Overall, none of them currently meet the international standards, and that’s going to be a big issue in getting them up to quality.” Even Weizhi Ji, director of China’s Kunming Primate Research Center, agreed: “I think that most facilities [in] China are not good enough ….”

Please contact China’s ambassador and let him know that you and your family will not look favorably upon China until it enacts and enforces animal welfare laws: