CHINESE PEOPLE DEMONSTRATE IN CHINA AND AROUND THE WORLD ABOUT TIBET, WESTERN MEDIA COVERAGE, AND THE DALAI LAMA 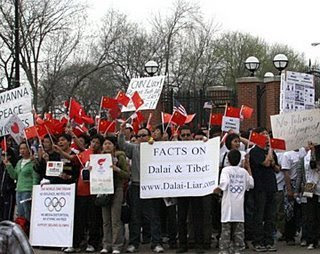 Hundreds of protesters (pictured here) gathered outside the University of Michigan Crisler Arena Sunday in support of the Beijing Olympics waving flags and chanting "Dalai Liar," "CNN Liar" and "We love Tibet. We love China."

Diane Brown, public-safety spokeswoman for the university, said the crowd of demonstrators was estimated at about 600 to 700 people. Many wore T-shirts that read "Support Beijing 2008," a reference to the upcoming summer Olympics.

"We overseas Chinese students were infuriated by the violence in Tibet on March 14 and the interruption on the Olympic torch relay wire-pulled by the Dalai clique, so we decided to stage this protest to make our voice heard," said Chen Jinhui, a student at the University of Michigan and one of the organizers.

On their placards the protesters displayed pictures, diagrams and historical records, which were collected from the Internet, foreign media reports and books written by Chinese and Western scholars, on the facts of Tibet's history and development, as well as the Chinese view of what has been going on in Tibet since this March 14, and information concerning protests against the Olympic Torch relay.

Protesters also spoke with passerbys and local media about China's policy on Tibet and its contributions to the improvement of the living standard of the Tibetan people.

The protest led to heated verbal exchanges between pro-Chinese and pro-Tibetan demonstrators. They traded shouts of "One China" with "Open the door! Let's see what's happening inside Tibet."

The exiled Tibetan spiritual leader spoke before more than 7,000 at the school.

In Rochester, Minnesota, several hundred Chinese protesters turned out.
Hundreds more were on hand during the Dalai Lama's stop in Seattle earlier.

"Wherever Dalai goes, he will always meet protests from Chinese people and all peace-loving folks," Ge Yan, a Chinese student studying in Minnesota, told Xinhua on Friday.

Meanwhile, AFP reports several thousand Chinese also rallied Saturday in Paris, Britain, Berlin and Los Angeles in support of their country and against allegedly biased media coverage of the Olympic torch relay and unrest in Tibet.

In Paris Saturday, up to 4,000 Chinese students and other expatriates gathered in the Place de la Republique wearing T-shirts daubed with the slogan "One China, One family" and brandishing signs critical of the western media, police said.

More than 1,000 people, mainly students, also gathered outside the BBC's offices in Manchester, north-west England, while around 300 staged a demonstration outside the Houses of Parliament in London.

In Los Angeles, police said up to 5,000 people gathered outside the Hollywood offices of broadcaster CNN in protest against one of the channel's commentators, Jack Cafferty, who described China as a "bunch of goons and thugs."

The channel has since apologized and said the April 9 remarks referred "only" to the Chinese government, not the people, but the row only added to the anger felt by many Chinese worldwide following protests during the Olympic torch relay.

In China itself fresh protests broke out on Sunday in reaction to the Western media's coverage of China's handling of Tibet.

The latest demonstrations came after thousands of Chinese rallied Saturday in support of their country, with branches of the French retailer Carrefour targeted.

For example, more than 1,000 people assembled in front of a Carrefour store in the northwestern city of Xian holding protest banners.

Media coverage of the demonstrations in China show the majority of the people who participated are Chinese youths below the age of 30.

The blog Awakening China says:
"...on the many Chinese forums and bulletins across China used by most educated young netizens, in which the Western governments and its people were unable to understand the extent of it because of the language barrier, were filled with anti-Western sentiments, some bordering on deep anger and hatred which may take one or two generations to nullify these negative effects."

The following is from CCTV International (China).

Overseas Chinese held peaceful demonstrations on Saturday in the US, France, Britain and Germany over distorted reports about China in western media. Their rallies were also aimed at showing support for the Beijing Olympics.

Sweltering weather didn't dampen their enthusiasm at the rally on Capitol Hill in Washington DC. Participants say inaccurate coverage by some western media about events in Tibet has triggered anger among overseas Chinese.

Even some Americans are expressing concern over the reports.

Lawyer Robert Fabrikant said, "I've been to the Tibet region and certainly the Chinese government has done a lot for the Tibet people. And I think many Americans are worried that they can't get the true stories from their own media here."

In London, demonstrators covered their mouths with masks in a silent protest against the reporting on Tibet in the British media. To help clear up misinformation, photographs taken during the Tibet riots were shown beside pictures with distorted information that some western media presented to the world.

In France, incensed by disruptions of the Olympic torch relay in Paris, and an attack on disabled Chinese torchbearer Jin Jing, demonstrators sang and cheered for the Beijing Olympics.

In Germany, about 3,000 Chinese students gathered in Berlin to protest biased news coverage by some German media and to support Beijing Olympics.

An overseas Chinese said, "Most Chinese trust Germans. But I also think most Germans are not very familiar with a lot of information, particularly about the history of Tibet."

Those who took part in the protests say they hope their actions help local media and local people better understand China and the Beijing Olympics.

Thank God there comes "one" news reporting the voices from the Home and Over seas Chinese People.
Americans,Please be Patient ,be a grown up to see what happened,what's happening and what will happen.
Why you only believe the Cnn news,just as you blame the Chinese only believe the "State-run"media..
What a joke,who give you the right to judge the Chinese?
Chinese People was educated since very young,that no matter what the US govenment is ,the people of the US is after all friendly,but today,what you respond to the Chinese "Friend"?
Free us?haha,are you kidding?free the Blacks and the Indians in the USA first ,please.Please study the history and known the ones before you want to librate them.
you have and are creating enemies and enemies,do you known why ?do you really know why?

It is cruel to keep these young folk panting for freedom in the prison of the USA let them get to China where demonstrations are encouraged by the State-I beleive they call them Tian Men's.

Studying at Hanbridge has given me an opportunity to not just speak and Study Chinese, but also to read and write. The cultural activities offered by the school really allowed me to accelerate my learning progress and gain a deeper understanding of the culture. At Hanbridge, I learned more than just how to use the Chinese language; I learned what it means to be Chinese. ?