THE LAWSON FILE: MR. LAWSON ON THE BUS SOMEWHERE IN JAMAICA 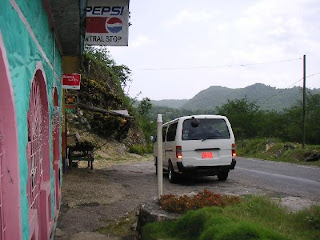 Getting around the island has become a wee bit of an issue in Jamaica lately.

In St. Andrew residents pissed off over an increase in bus fares have taken their anger to the streets (see article below).

Meanwhile, just yesterday scores of commuters were left stranded in sections of St Catherine as taxi operators withdrew their services, protesting bad road conditions and a hike in the road licence fees. The Church Pen main road in St Catherine was blocked by fallen trees.

The cry on the lips of taxi operators were that the bad road conditions have yet to be addressed despite a recent protest against this. The police later cleared the road.

Transport Minister Mike Henry rolled back the hike after the protests.

But not everyone can take a taxi.

So how about the bus riders?

In Jamaica where school absenteeism is a big problem a recent study found there are three main factors responsible for absenteeism. There are no money for lunch, no money for bus fares, and a category known as 'running errands.'

Now Mr. Lawson wasn't usually out blocking roads with boulders when I knew him but he'd have probably understood those Jamaicans who are doing that today...although he'd be worried about the stranded kids.

Mr. Lawson would also probably understand the thousands who risk death riding the islands many minibuses (one of which is pictured above) dodging around on the highways and biways (I remember the fun I had on them in Grenada a few years back). The minibuses while more dangerous are cheaper and show up more often then the regular buses.

One Jamaican recently put it this way in the Jamaica Gleaner:

"A vicious cycle. That's the only way to describe our country's public transportation system, as a ride on one of the many illegal minibuses that crowd the streets is almost always a near-death experience. However, the long wait and fatigue that one has to suffer before getting a Jamaica Urban Transit Company (JUTC) bus going your way, is just as frustrating."

Another said the big buses were becoming just as dangerous anyway:

"...(drivers) chatting on their cellphones with one hand on the steering wheel, bullying their way through the traffic, but most sadly, repeatedly blatantly breaking red lights at serious, serious risk - and for what?"

Hey, good luck out there.

The following is from Radio Jamaica.

Bus fare too much

Irate residents of Mavis Bank in St. Andrew Wednesday morning mounted massive road blocks in the community protesting a hike in fares by bus and taxi operators servicing the area.

The protesters reportedly used boulders, trees and other debris to cut off the main access road into the community stranding dozens of children trying to get school.

Callers to the RJR News Centre reported that people had parked their cars and started to walk.

The roadblocks were remounted as soon as they were cleared by the police.

Residents told our news centre that the bus fare has increased from $30 for children to $50 and from $70 to $100 for adults.

They argue that this is outside of regulation fares.
Posted by Oread Daily at 3:32 PM