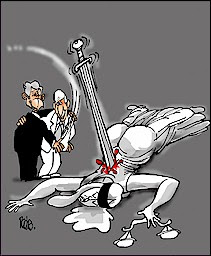 "I am free," exclaimed Posada Carriles, 79, on Miami's Radio Mambi, shortly after the judge in El Paso, Texas dismissed all seven charges linked to his sneaking into the United States and lying to immigration authorities.

As you've probably heard the US released completely terrorist Luis Posada Carriles yesterday. The release has sparked outrage around the world.

In the US Congress Democratic representative from Massachusetts William Delahunt, stated Posada Carriles impunity questions the US commitment of fighting terrorism. He has called for an investigation. A letter sent by Delahunt to Attorney General Alberto Gonzales demands an explanation from the Justice Department about why the Patriot Act was not used to prevent the freeing of a notorious international murderer

Argentinian Deputy Chamber Human Rights Committee President Remo Carlotto said, "we join those that internationally demand that this individual should remain jailed and be tried for his crimes."

Nicaraguan President Daniel Ortega announced he requested the terrorist's extradition some days ago, to judge him for the crimes that he committed in Nicaragua, during the dirty war the Central Intelligence Agency (CIA) financed against the Sandinista Revolution in the 80´s.

"What will happen to Posada Carriles is in the hands of the U.S. government," Maduro said, calling the U.S. "that terrorist-protecting government."

Maduro called on Americans to protest the White House's handling of the case and demand that "this terrorist be put behind bars where he should be."

"The United States makes a mockery of international organizations, international law and the world's conscience about this case," Maduro said.

Dagoberto Rodriguez, Cuba's top diplomat in Washington, said, "If the well-known terrorist Posada Carriles is free without charges it is the full responsibility of the White House."

Odalys Perez, daughter of the pilot of the Cubana 455 flight sabotaged in 1976, killing 73 persons on board, warned of an escalation of violence against Cuba with the liberation of terrorist Luis Posada Carriles.

"Posada Carriles walks the streets of Miami freely and we are not exempt from actions directed by this terrorist," she told Prensa Latina in an interview in this capital.

The following is from Ahora (Cuba).

Cuba will Continue to Demand Justice in Posada Carriles Case

Despite the dismissal by a US judge of all charges against Luis Posada Carriles on Tuesday, the Cuban people will continue to demand that justice be made against such a notorious terrorist.

The information about the decision by a US federal judge to dismiss all the migratory charges against Posada, setting him free and suspending the trial scheduled for next May 11, was announced to the Cuban people during the prime-time TV show The Round Table Tuesday evening.

Posada Carriles and Orlando Bosch, who now walk freely on US territory, were the masterminds of the 1976 bombing in mid air of a Cubana airliner that killed 73 people on board.

In a 38-page ruling, Judge Kathleen Cardone described as so grossly shocking and so outrageous the tactics used by the US administration to try Posada Carriles on seven counts of immigration fraud, though she did not criticize Washington for not having processed the defendant for his huge terrorist background.

Cardone said that the core of the case was not terrorism, as it was suggested, and she called the defendant a "hot potato" in political terms.

During the TV show, analysts denounced the passive behaviour adopted by the US prosecution as part of maneuvers aimed at guaranteeing impunity for Posada Carriles, who carried out terrorist actions ordered and allowed by successive US administrations for more than 40 years.

Rogelio Polanco, director of Juventud Rebelde Newspaper said the decision stems from the White House determination to not accuse Posada of terrorism. He recalled different terrorist actions undertaken by Posada Carriles against Cuba and other countries of this hemisphere, which included bomb attempts against Havana hotels in 1997, torture and murder of Venezuelan political activists in the 1970's.

Eduardo Dimas, TV commentator said that the decision reveals the double standard of the US administration's anti-terror policy. It is a decision aimed at preventing the terrorist from speaking about what he knows of the Bush clan, said the Cuban journalist and he asked: Who was the CIA chief when former Chilean foreign minister Orlando Letelier was the victim of a life attempt, or when the Cubana airliner was bombed off the coasts of Barbados?, and who ordered the release of Orlando Bosch? The answer is George H. Bush, who was US president from 1998 to 1992 and father of George W. Bush.

Cuban President Fidel Castro denounced, in March 2005, the impunity and protection offered to Luis Posada Carriles, who had travelled on board the Santrina boat and had entered US territory, said Reinaldo Taladrid, also Cuban TV journalist. Posada Carriles was arrested in May of that year, but since that moment many maneuvers have been undertaken in order to prevent him from facing justice and to keep many issues in secret, explained the journalist.

Although there is a pending extradition request by Venezuela, presented since 2005, and there is the chance that a New Jersey court could accuse Posada for his connections to bomb attempts against Cuban tourist facilities in 1997, the journalist considered that the release of Posada marks the end of the legal process and the beginning of the political stage of the case.

Taladrid referred to statements by several US congress people like William Delahunt, Jim McDermott and Jose Serrano on taking the case to the US Congress due to the danger it represents for the United States and the World. He cited a letter sent by Congressman Delahunt to Attorney General Alberto Gonzalez asking why Posada was not labelled a terrorist, and affirming that his release puts at stake the US commitment to fight terrorism while increases concern about a US double standard in dealing with terrorists.
Posted by Oread Daily at 2:38 PM