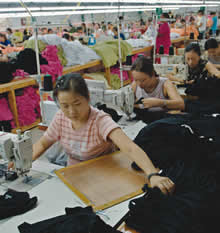 Hundreds of Chinese workers who are facing the loss of their garment factory jobs marched several miles to protest their treatment by the factory, a day after they took some management staff hostage during a protest. The workers say they were mistreated by police during their sit-in yesterday.

Dozens of them said they were recruited from different parts of China about six months ago and paid between $3,000 to $4,000 each to recruiters who promised them lucrative factory jobs in Saipan, they say. All of them will lose their jobs July 2, when the factory closes. .

According to Marianas Variety federal Labor Ombudsman Jim Benedetto says it would be “prudent” for the Department of Public Safety to conduct an investigation into the allegations of Top Fashion Corp. garment workers that police officers used “unnecessary” force on the workers at the Tanapag factory on Monday night after he watched video footage, saw photos, and heard personal stories from workers and witnesses.

Yesterday, hundreds of Top Fashion workers met with Benedetto, Department of Labor officials and Top Fashion counsel Michael Dotts at the Tanapag factory, wanting to hear direct answers to their questions — including those pertaining to the reimbursement of portions of the $3,000 to $4,000 in recruitment fees they paid in China to work at Top Fashion, and why police officers allegedly used unnecessary force against them.

Top Fashion manufactures Sears, Liz Claiborne and Kohl brands of apparel. Previously, they were also manufacturing clothes for Limited, among others.
An investigative report last year by Ms. Magazine stated:

Coming from rural villages and the big city slums of poor Asian countries, these garment workers began their sojourn in the Marianas with a huge financial deficit, having paid recruiters as much as $7,000 to obtain a one-year contract job (renewable at the employer’s discretion). Many of them borrow the money—a small fortune in China, where most are recruited—from lenders who charge as much as 20 percent interest.

In a situation akin to indentured servitude, workers cannot earn back their recruitment fee and pay annual company supplied housing and food expenses of about $2,100 without working tremendous hours of overtime. Before being able to save her first dollar, a worker who owes, say, $5,000 to her recruiter has to work nearly 2,500 hours at Saipan’s current minimum wage—which equals six more 40-hour workweeks than exist in a year.

...in 1975, the islands’ indigenous population of subsistence farmers and fishermen voted to become a commonwealth of the United States—a legal designation that made them U.S. citizens and subject to most U.S. laws. There were two critical exceptions, however: The U.S. agreed to exempt the islands from the minimum wage requirements of the Fair Labor Standards Act (allowing the islands to set their own lower minimum wage, currently $3.05, compared to $5.15 in the U.S.) and from most provisions of the Immigration and Nationality Act. This has allowed garment manufacturers to import thousands of foreign contract guest workers who, ironically, stitch onto the garments they make the labels “Made in Saipan (USA),” Made in Northern Marianas (USA)” or simply “Made in USA.”

The USA label tells customers “the quality is really good,” insists Cleofe de Guzman, a Filipina manager, as she walks down long, neat aisles past women pushing thin fabric through sewing machines. But to many Americans, adding USA to the label implies that goods are produced by Americans, not by foreign guest workers toiling under sweatshop conditions thousands of miles away.

“One or two days a week we’d work through an entire night, and I was exhausted,” Chen Xiaoyan, 26, told MS. “Sometimes we had no Sundays off either, but if you didn’t want to work they’d allow you no overtime at all as a punishment.”

The following is from the Saipan Tribune.

Disgruntled workers at Top Fashion Garment in Tanapag allegedly held a sit down strike and prevented some members of the management from leaving the factory Monday night to protest the impending closure of the factory.

As a result, police came in and arrested seven Chinese men at the scene.

Some workers, however, complained of police brutality when the officers allegedly sprayed them with pepper mace, and kicked and hit many of them, including women.

Ogumoro said preliminary investigation showed that disgruntled employees had blocked all exits of the office and refused to let the management or any other staff members leave.

Ogumoro said eight to 10 staff members were inside the office at the time.

The spokesperson said that Top Fashion management announced to its employees Thursday the impending closure of the factory. The shutdown will take effect on July 2.

“Employees became dissatisfied after being notified of this matter. The management has been trying to settle the issue with the employees,” Ogumoro said.

She said the case is under further investigation.

The workers walked toward the office of Federal Ombudsman Jim Benedetto in Puerto Rico yesterday to seek assistance.

Many of the workers told Benedetto that they had just arrived on Saipan and they haven't recouped the large sums of money they paid recruiters in China just so they could get a job here.

Top Fashion will be the 15th garment factory to close down on Saipan since January 2005, when the World Trade Organization lifted trade quotas.

The liberalization of trade rules has allowed Third World countries to export their garments to the U.S. As a result, many garments in the CNMI shut down operations.
Posted by Oread Daily at 1:53 PM