CHINA CLAIMS IT'S READY TO TAKE ON INDUSTRIAL ACCIDENTS...AGAIN 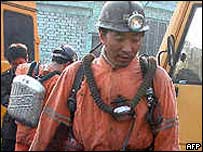 China's booming economy and huge thirst for energy is causing another spike in industrial accidents in that country. Addressing a national teleconference, Li Yizhong, minister of the State Administration of Work Safety (SAWS), said "The booming coal market is fanning the impulse of coal mines and other companies to increase production," he said.

"That will put more pressure on workers," he said, "as the phenomena of illegal production and illegal operation become rampant."

Companies tend to ignore work safety rules and surpass their production capacity, overworking their employees and overloading equipment to meet the demand, he said.

Li made specific reference to the disordered management and deliberate delay in reporting a gas explosion at a colliery in Linfen in North China's Shanxi Province on Saturday, which killed 30 miners.

He said that SAWS would launch a special campaign to improve work safety in key industries over the coming months.

Last August the Chinese government announced that it would invest nearly 60 billion U.S. dollars to reduce the country's notorious industrial accident rate over the next five years.

In its first ever five-year plan on workplace security, the government said it would reduce the death rate per 100 million yuan (12.5 million U.S. dollar) of gross domestic product from 0.70 last year to 0.45 in 2010.

The State Administration of Work Safety said the plan aims to reduce the number of accidents with more than ten deaths by at least 20 percent. China reported 73 such cases last year.

The total sum of 467.4 billion yuan (58.6 billion US dollars) to be invested in the future five years will go to nine safety projects including coal mine accident prevention, which is the top priority task in the five-year layout on work safety.

This week at least 15 workers were killed after an explosion in a coal mine in the northern province of Shanxi.

The following from the "its about time department" comes from China.org

Following a host of industrial accidents in April, authorities yesterday handed down punishments to scores of officials and businessmen involved in five mining and traffic accidents that led to the deaths of 249 people.

Speaking at a press conference yesterday, Li Yizhong, minister of State Administration of Work Safety, said that negligence, cover-ups, bribery and other acts of corruption by the 133 officials and executives held responsible for the five accidents also caused 95.1 million yuan (US$12.4 million) in economic losses.

For example, the gas explosion in Tangshan, Hebei Province, in December 2005, which cost 108 lives and caused 48 million yuan in economic losses could have been avoided if the unlicensed mine had been properly supervised, Li said.

Chen Cangzhi, vice-minister of supervision, said at the press conference that of the 133 people named, 51 were facing criminal charges. The remaining 82 were given Party or administrative penalties.

Of the 27 officials removed from office, six held positions at the prefecture level and 42 at county level.

Corruption and trading power for money have become the focus of our investigations, Chen said.
The announcement of yesterday's punishments came at a time when the country is experiencing a rebound in the number of industrial accidents, fuelled by an escalating demand for energy as the economy continues to expand.

Despite a clampdown on illegal industrial activities, the 20-percent rise in fixed asset investment in coal-consuming industries contributed to the 33-percent surge in the number of accidents in April compared with last year, Li said.

On Saturday, a blast at the Pudeng coal mine in Shanxi killed 28.

Its owner, who has since been detained, is said to have cheated inspection officials by showing them only that part of the mine that adhered to work safety rules.

Li, who is the public face of the government's anti-accident campaign, said the rules so often ignored by mine owners obsessed with profits should be more strictly enforced.

A new rule on the handling of accidents, which comes into effect next month, will form part of a national policy on the punishments to be issued for cover-ups, dereliction of duty and fraud, Li said.

He said several State Council and ministerial-level rules and judicial interpretations had already been put in place to punish those responsible for such accidents.
Posted by Oread Daily at 2:04 PM