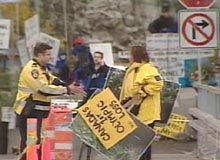 As previously reported here, environmentalists, residents, and other supporters set up their camp last month, blocking logging and blasting work, insisting the new four-lane section will damage the wetlands and forest. They argue expansion plans tunnel.

Below is an article from the CBC. Following that is an open letter to British Columbia Premier Gordon Campbell from a group of environmental scientists.

West Vancouver police arrested at least 20 protesters on Thursday morning at the Eagleridge Bluffs tent city that went up more than a month ago.

They were the people who decided to stay and be arrested after Staff-Sgt Jim Almas read aloud both the court injunction ordering them to leave and the subsequent enforcement order.

Earlier in the morning, the leader of the protest said he was looking forward to the arrests.

"If this is going down today, we want it to be memorable. So I'm hopeful that it is going to be a media circus," said Dennis Perry, who heads the Coalition to Save Eagleridge Bluffs.

The Eagleridge tent city went up in April, in an effort to stop the construction of a new section of the Sea to Sky Highway through the rock bluffs in time for the 2010 Winter Olympics.

They say the highway project would destroy a sensitive wetland.

The protesters want the provincial government to build a tunnel through the area of multimillion-dollar homes instead of logging and blasting through the bluffs. But the government has refused, saying it would cost too much.

The contractor went to B.C. Supreme Court earlier this month, seeking and obtaining an injunction ordering the protesters to move out to allow his crews to begin work.
FROM MAY 15, 2006: Eagleridge protesters told to get out of the way
But the campers refused to leave, and appealed the decision, unsuccessfully.

We are writing to request your attention, as Premier, to the escalating dispute in West Vancouver between the Provincial Ministry of Transportation and a growing number of citizens and organizations over the fate of Eagleridge Bluffs, the Larsen Creek Wetlands and the surrounding mature coniferous forest. We do not categorically oppose an upgrade of the highway, but are deeply worried by the antediluvian manner in which it is taking place.

As environmental professionals, we cannot remain silent in the face of the substandard environmental management practices currently applied to, what your own government has referred to, as “the most unique ecosystem in the Sea to Sky corridor.” Accordingly, we are requesting in the strongest possible terms that you exercise your responsibility as Premier and intervene in this extended dispute immediately.

We have four specific concerns: As applied at the Eagleridge Bluffs and adjacent Larsen Creek Wetlands, the Environmental Management Planning (EMP) process, Species at Risk Management approach, , the 2003 Environmental Assessment (EA) and the standard Best Management Practices were flawed and need to be corrected as outlined below:

1) The Environmental Management Planning (EMP) process applied to the first section of the Sea to Sky Highway 99 (referred to as DB1 is flawed because it is limited in scope.

Rather than insisting on a complete and integrated EMP for the whole of DB1(extending from Eagleridge Bluffs to Sunset Beach), the Province has accepted piecemeal EMPs, phased in as construction proceeds northward through DB1. The EMP being used here applies only to the subsection of DB1 from
Eagleridge Bluffs parking lot to the eastern boundary of Larsen Creek Wetlands for the first phase of
Construction.

Phased EMPs do not consider critical interactions and dependencies between adjacent Ecosystems such as the Bluffs, the Wetlands and the adjacent coniferous forest. They ignore important interconnected ecosystem dynamics such as the effects of fragmentation, trophic level energy flows, impact of changes to surface and subsurface waterflow, wildlife corridors, predator/prey spatial relationships and blow down effects. The Eagleridge coastal bluff Arbutus grove will not survive in its present form if fragmented by a major highway.

2) Existing relevant “Species at Risk” environmental legislation is not being applied.

In DB1, the Bluffs and Wetlands support a rich diversity of nesting migratory songbirds. During May 2006, over 20 species were confirmed, including flycatchers, kinglets, creepers, thrushes, towhees, sparrows, nuthatches, warblers and vireos. These birds are currently in their nesting season. Proceeding with proposed highway construction through Eagleridge Bluffs and the forest to the northwest would destroy songbird nests, eggs and nest trees.

There are no known mitigation measures in place to protect nesting songbirds and their young during the scheduled logging in Sea to Sky Highway Improvement project area DB1. Recent surveys by contracted environmental consultants have been too cursory to identify active nests. The young from these nests will be killed unless robust songbird surveys are carried out immediately. If construction is permitted, these birds will be discounted despite provincial, federal and international protective legislation mentioned above.

Similarly, federal and provincial BC legislation provides protection for the habitat of several rare and endangered species of plants, amphibians and animals as well as ecosystems known to exist at the Bluffs and the Wetlands. The proposed highway through DB1 will permanently damage the habitat so critical to vulnerable ecosystems, plants, organisms, amphibians, birds and animals such as the following.
 The rare red-listed dry coastal bluff Arbutus plant community (CWHdm variant)
which occurs nowhere else in BC or Canada
 The Larsen Creek Wetland microclimate
 The endangered, blue-listed Northern Red-legged Frog: confirmed to live in the Larsen Creek Wetlands by District of West Vancouver staff in 2005 and again in 2006 by registered professional biologists.
 The regionally rare Hairy Manzanita
 The endangered, blue-listed Howell’s Violet

3) The 2003 Environmental Assessment (EA) which facilitated the 2004 EA Certificate led to regulatory approval for the $600 million Sea To Sky Highway ImprovementProject. The 2003 Assessment is flawed and in need of improvement.

The 2003 EA is deficient in scope and in content. It does not refer to known rare and endangered red-listed and blue-listed plant communities at Eagleridge Bluffs. Nor does it address the blue-listed Northern Red-legged Frog known to occupy the Larsen Creek Wetlands.

The 2003 EA also does not consider all plants and animals in the Sea to Sky Highway corridor since baseline surveys were not carried out during all four seasons. A proper and thorough rewriting of the 2003 EA is essential.

4) Current, widely accepted Best Management Practices dictating a thorough assessment to identify environmental values prior to highway construction disturbances have not been followed.

The most important habitats to protect are often the closest to major urban centres. Vancouver, surrounded by accessible wilderness, is looked to by the world as a place that offers both residents and tourists an enviable opportunity to pursue a variety of outdoor experiences. All levels of BC government and business publicly foster respect for and sustainability of our natural surroundings as a vital part of our future prosperity.

Eagleridge is a legacy to be left to our descendants. Intervening to best mitigate the impact of the highway would be proof to the world that BC truly is “Supernatural BC” and proof that your government believes in sustainability of the environment and a sustainable, green Olympics in 2010. Disregarding our concerns and just blasting a highway through the Bluffs would send a very different message to the world. The full potential economic impact of this decision should be considered now rather than when it is too late.

We, the undersigned, request that you intervene to preserve the environmentally, recreationally and scientifically valuable ecosystems at Eagleridge Bluffs. As we stated, we do not oppose an upgrade of the Sea to Sky Highway but only request that you take a wise second look at the choices available.

Thank you for your consideration and we await your timely response on behalf of all concerned British
Columbians.