THE RICH AND POWERFUL ARE RAPING THE CHILDREN OF AFGHANISTAN 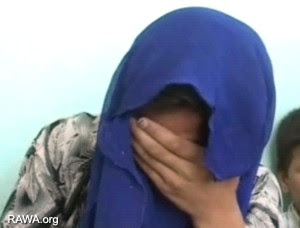 Recently, the people of Afghanistan were shocked by the reported sexual assault on a 12-year-old girl in Sar-e Pol Province.

They may have been shocked, but unfortunately they may not have been surprised.

With the recent attention cast on the war in Afghanistan, the news of an increase in child rapes somehow missed the US press reports.

“I can’t think of any country in the world in which children suffer more than in Afghanistan,” Radhika Coomaraswamy, the Secretary-General’s Special Representative for Children and Armed Conflict, told a news conference in Kabul recently. She said the ongoing violence in Afghanistan is taking a heavy toll on the nation’s children, who continue to be the victims of attacks, recruited and used as combatants and sexually abused.

She didn't mention that some NATO forces apparently look the other way when children are attacked.

For example, Canadian soldiers serving in Afghanistan have been ordered by commanding officers "to ignore" incidents of sexual assault among the civilian population, says a military chaplain who counsels troops returning home with post-traumatic stress disorder.

The chaplain, Jean Johns, says she recently counselled a Canadian soldier who said he witnessed a boy being raped by an Afghan soldier, then wrote a report on the allegation for her brigade chaplain.

In her March report, which she says should have been advanced "up the chain of command," Johns says the corporal told her that Canadian troops have been ordered by commanding officers "to ignore" incidents of sexual assault. Johns hasn't received a reply to the report.

The story of another 12-year-old girl, Nazriah, who was raped by a neighbor who happened to be high ranking member of the Afghan military is just one sickening story which is apparently becoming more and more common.

Nazriah said, "I went out of my house to bring drinking water, our neighbor the major was standing near our gate, he put his hand over my mouth and took me away in his car, I was scared, they carried me to a half dark room…”

Her Grandmother told Asia Calling of the nightmare,“After looting her dignity, the cruel people then bought some cloth, shoes and food for her and brought her home, when we saw her she was very scared, she was trembling and said that she had been hit by a car.”

They later realized that she had been rapped took her to the hospital.

Her Grandmother says the rapists have threatened to kill the whole family if they speak out.

Sometimes I want and to go and kill the rapists she says, but we are poor while they are rich she laments.

“Afghan children are in a really bad situation. It’s not just the uneducated and brutal people who abuse children but there are cases where well-know people are involved in abusing children.”

Seyawash says most families are too scared to report rape and child abuse.


The following is from Quqnoos.

AN AFGHAN human rights organisation has said the increase in the number of child rapes may drag the country into anarchy.

Child rapes have risen sharply in recent years, according to Afghanistan’s Human Rights Organisation (AHRO), which claims most of the sexual assaults are carried out by government officials and other powerful men.

A two and a half-year-old girl was recently raped in the northern province of Jowzjan. The child is thought to be in a critical condition in hospital.

In the last month, five children have been raped in the country, the AHRO said.

Head of the organisation, Lal Gul, said: "The situation is getting more critical every day. The government must not be quiet and must do its best to stop this problem. Law must be enforced equally on everyone."

Most rapes in Afghanistan go unrecorded because families fail to report them under pressure from criminals, AHRO said.

The Interior Ministry recently arrested and then fired five security officials in the northern province of Sar-e-Pul for failing to properly investigate the rape of a 12-year-old girl.

Badakhshan MP Sadullah Abo Aman said: "Such crimes have increased so much that even children are raped. There is no pity, nor any sense. These incidents show that the government is very weak."

Abdul Hameed Aimaq, a senator from Kunduz, said: "The courts take bribes, the attorney offices take bribes, and there is no one to ask about all this. For this reason, there are killings, rapes, thefts, and everything else. There is no government in reality."

The Interior Ministry refused to comment on the rape of the two and a half-year-old girl in Jowzjan.
Posted by Oread Daily at 4:11 PM