ISRAELI COMMANDER'S DEAL IS A DISGRACE 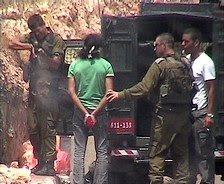 The regimental commander who oversaw the Israeli soldiers who fired a rubber bullet at a Palestinian who was handcuffed will be dismissed following an investigation. He will also face very minor criminal charge - "inappropriate behavior for a commander."

Israeli rights groups denounced the deal as a disgrace.

The investigation resulted when the Israeli human rights group B'Tselem released a video which had been recorded by a Palestinian girl of the incident. The footage showed a soldier firing a rubber-coated steel bullet, from extremely short range, at a Palestinian detainee who was cuffed and blindfolded. The act occurred in early July in the presence of several security forces, among them the battalion commander (mentioned above), a lieutenant colonel, who held the Palestinian’s arm while the soldier fired (see picture).

Until the video was aired, the army did not conduct a Military Police investigation.

The soldier who fired the bullet told investigators, according to press reports, that the battalion commander had ordered him to shoot the detainee. The commander, however, admitted only that he had ordered the soldiers “to frighten” the bound Palestinian.

The incident took place on 7 July, in Ni’lin, a village in the West Bank. A Palestinian demonstrator, Ashraf Abu-Rahma, 27, was stopped by soldiers, who cuffed and blindfolded him for about thirty minutes, during which time, according to Abu-Rahma, they beat him. Afterwards, a group of soldiers and border policemen led him to an army jeep. The footage shows a soldier aim his weapon at the detainee’s legs, from about 1.5 meters away, and fire a rubber-coated steel bullet at him. Abu-Rahma stated that the bullet hit his left toe and that he received treatment from an army medic and was then released by the soldiers.

Branding the deal as "disgraceful," B'Tselem stated: "The army treats the shooting at point-blank range of a bound man [only] as inappropriate behavior. It disgraces the values which it pretends to uphold."

A report released last week by Yesh Din said only six percent of probes into offences allegedly committed by Israeli soldiers against Palestinians in the occupied West Bank yield indictments.

'The figures on the low number of investigations and the minute number of indictments filed reveal that the army is shirking its duty to protect the civilian Palestinian population from offences committed by its soldiers,' Yesh Din legal advisor Michael Sfadi said in a statement.

According to figures provided to Yesh Din by the Occupation Forces (IOF), only a few of the investigations followed complaints from within army ranks.

Out of 152 probes launched in 2006, only 14, or nine percent, were based on complaints filed within the IOF, the report said. In 2007, seven percent of the investigations emanated from the IOF.

'The minute number of indictments launched following reports by commanders to military police brings to light the army's conspiracy of silence over offences against Palestinians,' Sfadi said.

The following is from YNet News.

Regiment commander to be dismissed over Naalin incident
Hanan Greenberg

Regiment Commander Lieutenant Colonel Omri Bruberg will be dismissed from his post in the wake of an incident where an IDF soldier fired a rubber bullet at a handcuffed Palestinian, Ynet has learned.

The IDF's Judge Advocate General, Avi Mandelblit, also decided that the commander and the firing soldier will face criminal charges of improper conduct. Such offences are considered relatively minor and do not result in a criminal record. The trial is expected to end in a plea bargain.

In response to the decision, Bruberg said: "I’m the commander, I'm responsible, and I'm paying the price. I believe this decision is good for the soldier (involved in the incident,) for the regiment, and for the army as a whole." In a talk he held with his subordinates, Bruberg said he is "proud of the army."

Bruberg's associates, however, said the commander was the one who decided to leave his post, and added that some of his superiors attempted to convince him to stay on.

For the time being it has also been decided that Lt. Col. Bruberg will not be able to hold command positions in the future. IDF Chief of Staff Gabi Ashkenazi is expected to meet with the dismissed commander and discuss his future in the military.

An indictment against the two soldiers is expected to be filed in the coming days. A plea bargain could see both of them handed a conditional sentence.

Military officials were not in agreement over the right approach to the case, and senior officers involved in the affair told Ynet Bruberg was spared a severe indictment.

Did commander lie?
The investigation into the affair started after a Palestinian girl filmed an IDF soldier firing a rubber bullet at a handcuffed Palestinian who clashed with forces in the Naalin area.

Once the probe got under way, investigators discovered disagreements between the soldier and his commander. The soldier claimed that he fired at the Palestinian on the orders of Lt. Col. Bruberg. However, Bruberg said he did not issue such order, but rather, only wanted to scare the Palestinian.

Subsequent polygraph tests indicated that the commander lied in his interrogation while the soldier was telling the truth.

Meanwhile, human rights group B'Tselem issued a statement calling the IDF's decision to dismiss the regiment commander and charge him with conduct unbecoming an officer – a relatively minor charge – "shameful."

The group, which exposed the incident, called on military authorities to launch a criminal investigation into the conduct of the Binyamin Region Brigade commander's conduct, claiming that the incident was being covered-up.
Posted by Oread Daily at 4:21 PM