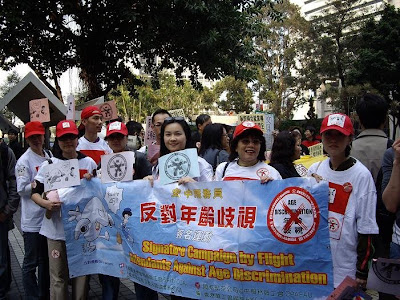 Hong Kong flight attendants are accusing the government of failing to protect them from age discrimination. They say large airlines such as Cathay Pacific, British Airways and United are forcing Hong Kong-based cabin crew to retire at 45. The flight attendants want the government to enact age discrimination laws. Yesterday they staged a protest at Hong Kong's airport to dramatize their demands.

It wasn't the first time.

In 2006, flight attendants from Cathay Pacific, British Airways and Dragonair staged a protest urging the government to legislate against age discrimination.

Apparently no one was listening.

In Hong Kong there is no law on the books preventing age discrimination. Indeed, after losing a sex-discrimination case to one of its female flight attendants forced to retire at age 45, Cathay Pacific, Hong Kong's flagship carrier, responded by lowering the retirement age for its male attendants from 55 to 45; now male and female cabin crew are fully equal at Cathay Pacific - both must deplane at 45.

Asia Times has reported Japan Airlines (JAL), which employs hundreds of staff in Hong Kong, appears to be the most youth-oriented carrier in the city. JAL has asked its Hong Kong-based flight attendants to disembark as early as their 35th birthday, and it is fair to say that most of these forced retirees think their premature retirement has nothing to do with their ability to do their jobs.

In fact, experience is crucial for aviation safety. Experienced flight attendants are very important as they are very knowledgeable to deal with contingency and emergency.

Some airline administrators have argued mostly behind closed doors that passengers want young, good looking flight attendants. However, studies have clearly shown
that the most important criteria of most respondents in selecting an airline was its safety record and not age of its flight attendants. Therefore, there would be no economic impact on the airline industry in Hong Kong (or elsewhere) to adopt an anti age discrimination policy.

Polls have shown 71 per cent of workers in Hong Kong approve of raising the retirement age. A new international workplace survey by Kelly Services, a global staffing provider, found almost 29% of Hong Kong workers aged 45 or older felt they had been discriminated against on the basis of their age.

The following is from The Standard (Hong Kong).

Don't ground us at 45, say attendants

A dozen flight attendants from four airlines staged a 30-minute sit-in protest at the airport yesterday demanding their airlines extend the retirement age from 45 to 65.
Representatives from Cathay Pacific, Dragonair, British Airways and United Airlines said attendants at the first three airlines are facing age discrimination since the airlines' pilots and ground staff are allowed to work until the age of 65.

United Airlines does not have an age limit for flight attendants.

Chanting slogans and holding signs in the departure hall, the attendants demanded fairness with regard to retirement.

"It is unfair because, in Europe and the United States, there are flight attendants working until 84. There is also racial discrimination in Japan Airlines as its Japanese flight attendants can work until 65 yet its Hong Kong employees have an age limit of 35," she said.

One of the protesters, Cathay Pacific Flight Attendants' Union secretary Vera Wu Yee-mei, said 45 was too young for a retirement age, given that the life expectancy for women in Hong Kong is 89.

"What should we do with the second half of our lives?

Confederation of Trade Unions lawmaker Lee Cheuk-yan, who was at the protest, urged the government to legislate against age discrimination in the workplace.

A Cathay Pacific spokeswoman said the airline has been actively engaging the union and members of the crew community to discuss subjects of common interest, including retirement age.

"All staff were fully informed of the employment conditions, including the retirement age, when they accepted the company's employment," she said.

The spokeswoman maintained the extension of retirement age is a complex issue which has a significant impact on promotion prospects, pay and benefits, and is a decision that requires careful consideration.

A Dragonair spokesman said the retirement age for its cabin crew is broadly in line with that of its competitors.

"It is not uncommon for companies to adopt different retirement ages for different staff groups and different countries in accordance with the job nature and environment," he said.

A spokeswoman for the Equal Opportunities Commission said it is against discrimination on any ground.
Posted by Oread Daily at 4:00 PM