THE LAWSON FILE: DON'T SHUT THIS JOINT DOWN 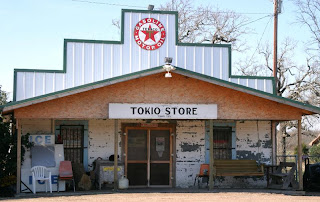 Neighbors complain about bars all the time, the noise, the rowdiness, the motorcycles. Then, as always there are the allegations of of public urination. Often I am in sympathy with the complainers. But this time my borthers and sisters the place in question, The Tokio Store, has been operating for a lot longer than any of the folks who live nearby have been in the neighborhood. Also, this time the local gendarmes don't seem to see the problem either. This seems just one of those "not in my back yard" issues.

It's true there is live music on weekends and there are motorcycles (god forbid). But the offending joint has been operating for 100 years. Seems a shame to shut it down now.

Try a fan and a white noise machine in your bedroom folks. Works for me when neighbors get noisy and I'm one lousy sleeper.

The owners of the Tokio Store in little Tokio, Texas are more than willing to try to work out whatever problems do exist, but the landowners nearby don't seem interested.

This is a place owned by a disabled Vietnam Vet who has suffered from traumatic stress syndrome and it is a place where numerous charity events are held each year.

Who amongst us can forget the Tokio Store Fish Fry and Music Festival Featuring Heart of Texas Road Gang, Texas Style, Taylor Brothers, Spivey Crossing and others held just last month with proceeds going to Shriners Hospitals for Children.

And its noted for its pie.

One of those who hang out there had this to say about the place:

"Nice little place for a beverage and a game of pool. VERY biker friendly. Opens at noon. If they don't look open, just pull up your bike. The owner lives next door and will come and open the place for you."

Another, some fellow named Richard said,

"We were at the Tokio Store last night, it was our daughters birthday, she is good friends of the new owner and his wife, they had the Nascar race on the TV for all the folks to watch, we had a blast, some of the best old country songs on the juke box I have heard in a long time and definitely the coldest beer to be found!"

Or there is this from Boyd Saller,

"I am glad to see the Tokio Store on your site, it is definitely a Texas Honky Tonk!! One that I know Willie himself would praise, since he's played there (If you have to ask who Willie is, then don't bother). Plus my ranch is just north on the other end of Old Railroad Road, so I have a soft spot for Debra and Charley, the current owners. If you ever get near there, just a few miles West off I-35 on FM185, stop and have a cold Shiner or just for some good ole' Texas talk!

By the way those bikers the neighbors are all riled up about - well, we're not talking vicious meth dealing bikers here, at least not for the most part. See the post below for a little on that.

I remember when my hangout, The Rock Chalk, a bar that catered to longhairs in Lawrence, Kansas back in the 60s was closed because the Attorney General of Kansas didn't like it. I was pissed. I kinda equate this with that.

Google Tokio Store and all kinds of interesting events and music stuff pops up.
Sounds fun to me.

There are plenty of complaining neighbors left though.

The following is from the Waco Tribune.

Historic Tokio Store under fire from neighbors over noise, traffic
By Tommy Witherspoon

The Tokio Store has survived a major fire and a devastating tornado in the more than 100 years it has served as a general store and, more recently, as a unique place to down a cold brew and meet new friends in a cozy rural setting.

A threatening storm of another kind is brewing, however, around the northern McLennan County landmark that is pitting the store against 30 of its neighbors and involves the county and at least two state agencies.

The neighbors of the bar, located a few miles southwest of West, hope to shut it down as a public nuisance and have filed at least two petitions with county commissioners, a license protest with the Texas Alcoholic Beverage Commission and a complaint with the Texas Commission on Environmental Quality.

The bar’s detractors say it is a weekend haven for “wannabe Hell’s Angels” who race up and down Old Railroad Road and Tokio Loop and claim that bands playing there on weekends rattle their windows and shatter the serenity of their country lifestyle.

The neighbors also say that parking problems during busy weekend events at the bar choke off public access and threaten the safety of area residents and bar patrons, some of whom bring their young children with them.

They also claim that two long-abandoned underground gasoline storage tanks are in violation of environmental regulations.

Tokio Store owners Charles and Deborah Kirkpatrick said they are just trying to make an honest living and hope the problems with their neighbors can be worked out.

“I just wish they would do like we try to do — leave everybody alone,” said Charles Kirkpatrick, a disabled Vietnam veteran who has been diagnosed with post-traumatic stress disorder and complications from exposure to the defoliant known as Agent Orange.

Kirkpatrick’s mother and stepfather, Georgia and Blakie Kruger, ran the bar for 40 years before Kirkpatrick and his wife took it over 11 years ago. They said they are hoping to apply to have a Texas Historical Marker placed on the bar while they work with the various county and state officials to resolve their neighbors’ complaints.

“We’ve just got a unique situation here, and it seems like there is no fast or easy solutions,” Deborah Kirkpatrick said. “We are just leaving it up to all the other folks to help straighten it out.”

The Kirkpatricks said they have run off a few of the more undesirable biker groups who have tried to patronize their bar. Most who come now are groups such as the Iron Pigs or Blue Knights, clubs of motorcycle-riding police officers and firefighters, or the 100 Percenters, a group of disabled veterans who also ride.

Most of the groups ride their motorcycles on the weekend and stop off at the Tokio Store for a beer or other cold drink on their way home, the Kirkpatricks said. Live bands on the weekends shut down no later than 12:30 a.m., and the parking complaints have not been a problem before the neighbors’ most recent petition drive, they said.

The only time one of the two parallel roads that run in front of the store has been blocked off was when they had a benefit for the Shriner’s Hospital for Children and the street was used for additional parking with the permission of county officials, the Kirkpatricks said.

The bar’s closest neighbors, Mike and Joy Cook, have helped organize the petition drives and protests against the May renewal of the bar’s state license to serve beer. They said the problems, including litter, have gotten worse the past two years and contend that the Kirkpatricks’ claims to them that they can’t control the actions of their patrons is not acceptable.

“The loud, rowdy patrons which frequent the bar have no respect of our rights or feelings for our homes,” an open letter sent to the residents of Tokio says. “They come to drink, block traffic, throw trash on the roads, urinate outside and loudly race down the streets.”

Cook, who lived on the road for years but moved next door to the bar after his mother died in November, said he has been threatened by drunken bar patrons whom he confronted about throwing beer bottles in his yard. He says he can’t keep his windows open at night because of the noise emanating from the bar.

McLennan County Precinct 3 Commissioner Joe Mashek and County Engineer Steve Hendrick have been trying to resolve the parking issue for a few months. The county right of way apparently runs right through the front porch of the store, and there is an issue of whether the underground storage tanks and the Kirkpatricks’ trash Dumpster are on private or county property.

Store patrons historically have parked in the median between two county roads, Old Railroad Road and Tokio Loop, Mashek said. Those matters are still under deliberation, he said.

“The Tokio Store has been part of the Tokio Community and its history for over 100 years,” Mashek said in a prepared statement. “However, the issue at hand is the traffic on the roadways surrounding the store, which I inherited when I took office as commissioner. Until now, the roadways represented in this matter had not been identified as a problem. I appreciate the concerns of the citizens in the community and am looking into their concerns.”

Andrea Morrow, a TCEQ spokeswoman in Austin, said complaints about the underground gas tanks are being investigated, including an attempt to determine the location and ownership of the tanks.

When it is determined whether the Kirkpatricks or the county is responsible for the tanks, they likely will be removed or filled in by the responsible party, she said.

McLennan County Sheriff Larry Lynch said his deputies go to the Tokio Store when they are called. However, he said, “they have always been compliant.

“They have live music. It’s a beer joint,” Lynch said. “But it hasn’t been anything that has been a major problem. They park up and down the road, but they have been doing that for years.”

“We call that ‘Not In My Back Yard,’ ” he said. “That is not a legal reason to protest their beer license. You have to have legal facts to protest. But it is a real divided issue out there.”

Dickson said his agency investigates protests against a bar’s beer license. That is forwarded to the agency’s legal department. They review it, and if it warrants a hearing, it is referred to the county judge, who conducts a hearing and makes a determination.

Sometimes TABC officials try to mediate a dispute between bar owners and protesters, Dickson said. Those efforts frequently result in agreements to put up a fence, to redirect outside lighting, to turn the music down or shut down an hour or two early, he said.

“We will do everything we can with the protesters and the licensee,” Dickson said. “If we can work it out, that would be desirable. If it doesn’t get worked out, we will have to go to a hearing.”
Posted by Oread Daily at 4:09 PM