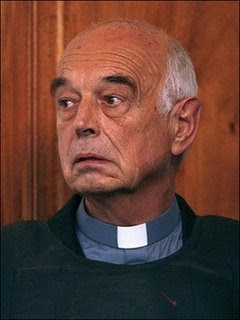 Christian Federico von Wernich (seen here), who was born in 1938 and who is of German origin, became chaplain of the Buenos Aires Provincial Police in 1976. Despite having been implicated in the testimonies of numerous victims of human rights abuses, the Catholic priest, now 68, has enjoyed the protection of Argentine amnesty laws for decades.

Now, perhaps, his time has run out. Rulings by the Supreme Court of Argentina have finally led to a trial.

The prosecutor in the case has accused Von Wernich of “primary complicity” in torture and murders, having had direct contact with those detained in the Argentine dictatorship’s many detention centers. In the city of Buenos Aires and the surrounding province of Buenos Aires. Von Wernich is accused of participation in seven homicides, 31 cases of torture and 42 abductions at five different detention centers in the Buenos Aires area.

In addition, Von Wernich used his position as a priest to extract information from the prisoners - even violating the sanctity of the confession, one of the Catholic Church's most sacred sacraments - and promising them that their salvation lay in co-operating with the authorities.

The crimes Von Wernich is accused of were committed during the 1976-1983 military dictatorship in Argentina. An estimated 30,000 people were killed during the military junta’s reign of terror. As his trial began, hundreds of human rights activists stood outside the courtroom in the city of La Plata to decry Von Wernich as a murderer.

Already at his trial Von Wernich has been fingered for his part in the torture of late journalist and publisher Jacobo Timerman by the victim's diplomat son.

From 1971 to 1977, Timerman edited and published the left-leaning daily La Opinión. Under his leadership, the paper publicized news and criticisms of the human rights violations of the Argentine government during the darkest hours of the "Dirty War". On 15 April 1977, Timerman was arrested by the military. Thereafter, he was subjected to electric shock torture, beatings, and solitary confinement. These experiences were chronicled in his 1981 book Prisoner Without a Name, Cell Without a Number. Jacobo Timerman was eventually released from custody as a result of an international campaign. He was then ordered out of the country.

EFE reports, appearing Monday at the trial of the Catholic priest, Hector Timerman, currently the Argentine consul in New York, said that while Von Wernich did not approach his father to speak with him because "he knew that he would not convince him," the chaplain did "participate in the torture."

"Before my father was expelled from Argentina, he told me that many times when he was tortured with an electric cattle prod his blindfold slipped from his eyes because of the jolts of electricity and he saw (police chief) Ramon Camps, Dr. Jorge Berges and the priest, Von Wernich," Hector testified.

The diplomat said that Von Wernich sat near Camps to "observe the torture."

Jacobo Timerman (1923-1999) was held in clandestine detention centers known as Coti Martinez and Puesto Vasco - both of which were visited by the priest - and was tortured there for months.

"They tied my father to a bed, they poured water over his body and stuck the cattle prod in his mouth, on his genitals and sometimes in his anus, while they called him 'Jew' and taunted him for being circumcised. He was tortured, humiliated and violated, without any accusation at all being made against him during his entire captivity," the younger Timerman said.

The consul went on to say that his father recalled that 80 percent of the questions his captors put to him "were about whether he was a Jew and a Marxist."

"Von Wernich told Camps that all these people (Jews) had to be killed," he said.

The following is taken from the blog Renegade Eye.

A much awaited human rights abuse trial is underway in Argentina. The accused is a catholic priest charged with carrying out human rights abuses while working in several clandestine detention centers during the nation's 1976 to 1983 military dictatorship. The priest has been under arrest for 4 years ago while living under a false alias in Chile. This is the latest human rights trial of accused torturer since the landmark conviction of a former police officer for genocide in 2006.
Former Chaplin Christian Von Wernich wore a priest's collar and bullet proof vest as he sat behind reinforced glass in a federal court. The court clerk read charges accusing him of collaborating with state security agents and covering up crimes in seven deaths, 31 cases of torture and 42 cases of illegal imprisonment. He answered basic court questions but refused to testify in the case, “Following the advice of Dr. Jerollini who is my lawyer. I am not going to declare. And I am not going to accept questions.”

At least 120 witnesses are slated to testify against Von Wernich and the court has taken precautions to protect their safety, putting up police fences around the court house and installing metal detectors. In the front row of the court room's audience, representatives from the human rights organization Mothers of Plaza de Mayo sat with their white headscarves listening to the court's accusations.

According to Nora Cortinas, president of the Mothers of Plaza de Mayo – Linea Fundadora, the Catholic Church supported the crimes committed during the dictatorship.

“The heads of the Catholic Church participated in the dictatorship. Many priests were chaplains inside the barracks of the concentration camps. We want to point out that there is a sector from the church that didn't have anything to do with the dictatorship, on the contrary they supported us and reported the crimes committed at the time. But most of the representatives from the church participated in the celebration of death and torture.”

Journalist Horacio Verbisky recently published a book on the Catholic Church's involvement with the military dictatorship. Outside the courthouse, hundreds of human rights advocates rallied, demanding a severe sentence for the Catholic Priest. At one point, Von Wernich interrupted head judge Carlos Rozanski, saying he couldn't hear the accusations against him because protestors could be heard yelling 'Assassin' from outside the courtroom.

Christina Valdez's, whose husband was kidnapped and disappeared in La Plata in 1976, describes how she felt seeing Von Wernich on trial. “Looking at Von Wernich is looking at the face of a murderer. I suppose that all the relatives of the disappeared must feel a similar sensation: a certain impunity because one has to sit and swallow down everything that he or she feels in that moment. You can't yell at the murderer, you can't scream assassin.”

This is only the third human rights trial since Argentina's supreme court struck down amnesty laws in 2005 protecting military personnel who served during the 7-year dictatorship. Human rights organizations worry that judicial roadblocks and an atmosphere of fear may provide former members of the military dictatorship a window to escape conviction.

Nora Cortinas says that Argentines do not wish to live with a justice system of impunity. “What we want is for the trials to speed up a little bit and not be tried on a case by case basis. And that the government takes responsibility to help end the threats against witnesses, judges, and lawyers. So that we can really say that there's justice in this country.”

Von Wernich's trial is expected to go on for two months. Human rights groups are preparing events to demand the safe return Julio Lopez, a key witness who helped convict a former officer for life, but who disappeared nearly a year ago.
Posted by Oread Daily at 2:03 PM