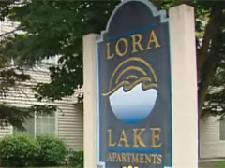 What has accounted for the tremendous rise in homelessness in recent years?

There are a gazillion and one answers to that question.

One of the causes most obviously has been the destruction of low income housing.

A good example of this can be found in the great northwest in Washington state where people from the SHARE/WHEEL community were arrested early Thursday morning after locking themselves in one of the Lora Lake Apartments in Burien, which are slated to be torn down.

The Lora Lake Apartments had been used by the housing authority as a halfway decent place where people with not a whole bunch of money could live. Housing authority vouchers were good there.

The Port of Seattle owns the property which it purchased back in 1988 and has had an agreement with the King County Housing Authority, which rented and operated the apartments until this summer.

This week the Port of Seattle rejected an offer by King County to purchase and preserve 162 of the apartments with rents that are affordable to lower- and moderate-income families.

Such housing units have been destroyed in the tens of thousands across the country in recent years leaving no place for low income people to call home.

Not the Port of Seattle which said in a letter Wednesday that it will move ahead with its plans to demolish the now-vacant Lora Lake Apartments, which they say they bought to make room for Sea-Tac Airport's third runway which someday soon might be under construction.

Homeless advocates point out that the building which contained an apartment they seized this week has more than 160 units and is outside the area where the runway would be built.

"I think it's outrageous," said Bill Block, director of the Committee to End Homelessness in King County. "The idea that because seven years ago they were going to take this down doesn't take into account the tremendous change in the housing market."

The Seattle Times reports the city of Burien wants to put a big-box store on the site, and the Port is hoping for a cargo warehouse.

To hell with people.

The following is from KIRO-TV (Washington).

BURIEN, Wash. -- Nine people were arrested at an apartment takeover by homeless advocates Thursday. Representatives of Share-Wheel said they were occupying the affordable housing complex to protest its planned demolition.

Sgt. John Urquhart said the nine protesters were booked into the King County jail for trespassing, a gross misdemeanor. King County Sheriff's deputies were called to the Lora Lake Apartments this morning by the property's management company.

Twelve people had taken over a second-floor apartment and were refusing to leave. After deputies announced that anyone who did not leave would be arrested, Urquhard says two people climbed over a balcony, jumped to the ground and walked away.

King County offered to purchase the complex and preserve the 162 apartments for affordable housing. But the offer was rejected by the Port of Seattle. The complex was listed for demolition to make way for the third runway at Sea-Tac, but homeless advocates say the building is outside of the runway's safety zone.
Posted by Oread Daily at 3:56 PM