ISRAEL'S BEDOUIN WON'T PUT UP WITH "IT" FOREVER 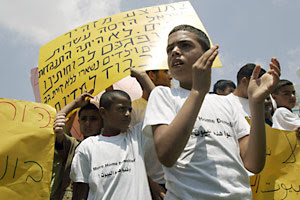 Approximately 130,000 Bedouin live in the Negev. They are the indigenous inhabitants of the Negev. Before 1948, Bedouin were for generations the only residents of the Negev, a land mass that makes up some 60 percent of present-day Israel, but comprises less than 10 percent of the total population.

Although the Bedouin have never represented a threat to the state of Israel,they have been treated none to kindly, to say the least, ever since its creation anyway.

As aptly put by the progressive Jewish weblog "Jew School",

"...the Bedouin have from the beginning, been shuffled about, forcibly resettled - multiple times- have failed (despite court orders) to receive water and power in their new placements, have a substandard educational system, and so on. The policy of settling nomads is one that was favored by colonialist powers of previous eras - the world has since then come to see its results in all the places where it has occurred. Must we continue such policies in the modern state of Israel? Must we continue to take away the little in property and dignity that the Bedouin have left? Must we harm those who have done us NO harm whatsoever? Who, in fact, serve in the army? Are we so short of enemies that we need create more?"

Today, residents of the Bedouin village of Umm el-Khiram, together with thousands of others whose homes have been bulldozed into rubble over the past six months, have launched a tent camp protest in Jerusalem's Wohl Rose Garden, opposite the Knesset.

Dvorah Brous, a founder of Bustan, a non-government organization devoted to the humane and ecologically-sound development of the Negev, including coexistence between Jews and Bedouin based on principles of fairness and mutual consideration, told The Jerusalem Post that the Bedouin protest, organized by the Regional Council of Unrecognized Villages in the Negev, would be a protest of the "internal refugees." Brous added that the protest would not only look backwards towards those whose homes have already been destroyed, but to a future where many more stand to lose them, including 70 families who have been told they must leave their homes to make way for the infrastructure of the civilian section of an airport near Arad.

The Regional Council points out the indigenous Bedouin Arabs are a unique community of the Palestinian people that has lived in the Negev for centuries. In 1948, they formed 98% of the population of the Naqab. However, after the establishment of Israel, only a small fraction of the population was left in the Naqab, Israeli forces having expelled the rest to Jordan and Egypt. The Israeli authorities have refused to recognize the Bedouins' traditional tenure rights. Dispossessed of the lands they have owned for centuries, today the 160,000 Bedouins are the most disadvantaged citizens in Israel. Almost half of the Bedouin community of indigenous citizens live in seven failing government-planned townships or “concentrations” (rekuzim), as Israeli planners calls them. The remainder lives in at least 45 villages that the State of Israel still refuses to recognize. These villages do not appear on any official maps of Israel and, without recognition, are denied basic services such as running water, electricity, garbage collection, etc.

The government policy for all of these decades has been leading to this one struggle to uproot these people. The government towns established to resettle the Bedouin are full of unemployment and crime, designed with no other purpose than to concentrate the Bedouin so they take up as little land as possible, cutting them off from any possibility of living a traditional life. The government has refused to give these citizens the services, rights or protections given to others so that it can eventually take away their land. Im tirtsu: Don’t let this nightmare of a “dream” become a reality!

The Regional Council for the Unrecognized Villages in its call for the demonstration wrote:

According to Olmert’s government, Israel’s policies toward the
Bedouin is changing: a new evacuation-compensation plan will be
established, in which the Bedouins will be offered extended
compensation for evacuation from most of their ancestral villages. In
order to “soften” the Bedouins, the government has decided to
implement mass demolitions. They believe the Bedouins will accept the
offered compensation and will be willing to leave their ancestral
villages. We are witnessing the beginning of this policy: Israel has
demolished 110 Bedouin homes since the beginning of 2007. More than
600 children have been made homeless by the Israeli government, while
their parents have no “legal” alternatives for creating them a home.

Was it not enough harm to leave these villages in the state of
Non-Recognition for the 60 years since the establishment of The
State? Must the government choose to continue with its destructive
policies towards the Bedouin community and by violent means take away
the little they have left?

We call upon the Israeli government to treat their Bedouin citizens
with fairness and dialogue, not with violence. The tactics of the
government to pressure the Bedouin out of their homes will bring
about only frustration and misery.

The government of Israel claims that there are not enough lands to
allow the continuation of the villages, therefore they must implement
this policy of concentration. If so, how is there sufficient space
for 60 new single-family ranches in the Negev, each consisting of
hundreds of acres, but there is not sufficient space to leave 80,000
(Arab) citizens in their historical villages? The unrecognized
villages consist of 14% of the Negev population, and live on less
than 1.8% of the Negev land — they are not the “squatters” as the
government portrays them.

Families who have ben left homeless by the government demolitions
will live in a refugee camp by the Knesset, starting tomorrow,
Monday, July 16th. We will begin the camp with a demonstration by the
Knesset.

Come join us in our demonstration! Do not allow the continuation of
the destructive policies towards the Bedouin community in the Negev!

Seven years ago Raed Abu Elkian, 27, finished serving in the Israeli army as a Bedouin tracker. Late last week he led a group of 35 Israelis and visitors from abroad to the edge of a road skirting the southern part of the unrecognized Bedouin village of Umm el-Khiram, where, on June 25, police demolished nine permanent homes and 20 other buildings.

"When [the government] comes with such a large [police force]," he told the group, " it shows me it is weak. It does not believe in anything. But I have faith. I will rebuild my home. I am stronger than the government."

Elkian warned that the Bedouin could not be ignored forever. "The Arab Bedouin minority is the strongest people in the world because no one else suffers like it," he said. "But I believe that someday the situation will explode, worse than it did during the [Palestinian] intifada. Everything has a limit."

The following is from Haaretz (Israel).

More than 800 people protested in front of the Knesset on Monday against the government practice of demolishing Bedouin homes in the Negev.

The protestors came in 17 buses from southern Israel, and called on the government to "stop destroying homes."

After the demonstration, in the afternoon, the Bedouin began constructing what they called a "refugee camp" in the Wohl Rose Garden across from the Knesset, which is to house both the Bedouin who have had their homes destroyed and those whose homes are slated for demolition.

The encampment will be made up of three tents ? one for women, one for men and one for families. Some 30 people are expected to spend Monday night in the camp.

The Arab MKs and Dov Hanin (Hadash) visited the site. The organizers are demanding the government halt the demolitions and launch a dialogue with the Bedouin population in order to reach a joint land agreement on the unrecognized village.

The Bedouin claim ownership to some 800,000 dunams of land, or 6 percent of the territory of the Negev desert in southern Israel. To this day, Israel refuses to recognize the claims, and an estimated 75,000 Bedouin live in villages unrecognized by the government, which do not enjoy public funding or services.

Eleven unrecognized villages have received state recognition in the past several years, but 36 more have no legal status, and the homes in these villages are subject to demolition. In 2007, the government had 110 homes destroyed.

One community slated for demolition is A-Sira, which has organized to submit petitions against the move to the High Court of Justice. The government claims that A-Sira, near the Nevatim junction in the Negev, sits on land acquired in the 1980s through Israel's peace deal in Egypt, which saw an exchange of territories between the two countries.

However, the Bedouin of the village never received compensation for this land, and demolition orders for some of their homes were issued in 2006. Orders for the rest were issued this month.

The Israel Lands Administration says that the residents were offered plots in the permanent Bedouin settlement of Hura, but the this claim was met with surprise by the residents themselves. According to the Interior Ministry, the residents were asked to evacuate the premises two decades ago, after the land was expropriated in 1982 to hold future army bases. The families, however, say the order came just last year.
Posted by Oread Daily at 2:43 PM

Thank you for sharing.