HOSPITAL WORKERS WALK OUT IN TRINIDAD AND TOBAGO 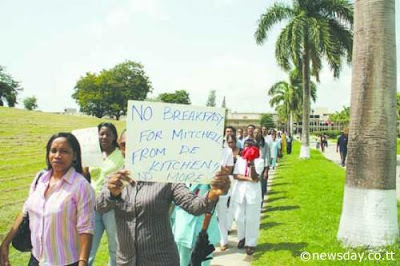 More than 500 protesting workers and supporters kicked up a storm with boisterous chants of “no increments, no betterment.”

Checks at the various wards at the complex’s adult hospital, revealed that patients were receiving medical attention.

Attempts by local journalists to get a comment from management officials at the facility were futile as police guarded the entrances of the administrative building.

The following comes from the Trinidad and Tobago's Newsday.

Operations of the Eric Williams Medical Sciences Complex, Mt Hope (EWMSC) were crippled yesterday when hundreds of workers walked of their jobs to protest delays in paying salary increases.

Nurses, patient-care assistants, radiology technicians, dental technicians, drivers, clerical staff and a host of other support staff began their protest at about 10 am, and vowed to continue to stay away unless the North Central Regional Health Authority (NCRHA) and Ministry of Health address their concerns.

Their actions affected patients warded at the women’s hospital, children’s hospital, adult hospital as well as persons seeking medical attention at clinics, pharmacies and the emergency departments. The NCRHA in a statement last evening said the workers action was illegal because they provide an essential service, and ordered that they return to work immediately. The complex is now forced to operate on emergey mode, said the NCRHA although it advised that services will continue.

Earlier Public Services Association representative Yvonne de Peiza said the workers will keep up their protest “for as long as it would take for (management) to get the message and their act together.”

One person who was leaving the Mt Hope facility yesterday after failing to get medical attention stated the public should have been notified about the protest.

But De Peiza said while it was unfortunate that patients had to leave, “we don’t have to notify the public about anything. It is about time the public and the minister understand that the workers are aggrieved for years and we take and we take but if we are aggrieved we can not serve the patients to the best of our ability.”

Apart from delays in salary payments, workers said they have also not received their overtime allowances. They also complained about the circumstances under which workers are fired without proper redress citing the dismissal of six workers as well as the nurse and nursing assistant who were fired over the burning of baby Justin Paul.

One fired nurse said, “Today is to support all members of staff in getting their increments owed and their new salaries.”

De Peiza said staff also experience delays in having their positions made permanent or in getting their promotions approved. She said other public servants got their money since May NCRHA workers had to go through the Public Service Negotiations Committee (PSNC) in the Ministry of Finance. Although approval was given two weeks ago they are still in the dark as to when they are going to get their new salaries, she said.

Health Minister John Rahael yesterday confirmed the PSNC has already approved the salary increases and assured the allocations would be made this month.

“The Ministry has to get an official document from the CPO (Chief Personnel Officer). We are hoping that by tomorrow we should get it. I want to give them the assurance that before the end of this week we will receive the actual letter, so that matter will be resolved, and by the end of this month their new salaries will be reflected in their packages including May and June salaries.”

As for the human resource complaints, Rahael said that the NCRHA board and CEO Charles Mitchell are responsible for these matters.
Posted by Oread Daily at 3:22 PM