"WE'RE NOT CRIMINALS...WE ARE WORKING PEOPLE" 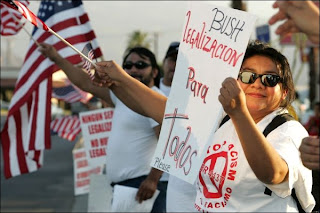 KESQ (California) reports hundreds of Coachella Valley residents lined up in the streets Monday night. They gathered to protest the lack of immigration reform which is stalled out in the US Senate right now.

Formed in January 2006, to battle an enforcement-only immigration bill supported by Rep. Mary Bono, Comité Latino is a grassroots organization pressing for amnesty for the estimated 12 million undocumented immigrants living in the United States.

The group has organized several protests valleywide including last year’s May 1 boycott of work and spending and a march to make Coachella a sanctuary city.

“I hope it’s the last time we have to protest for this,” Cardona said.

Last year in February, Comité Latino organized a similar event where hundreds of protesters across the valley formed human chains in a show of solidarity against HR 4437, which criminalized those who help the undocumented.
The Coachella Valley is an irrigated agricultural and recreational desert valley in southern California, United States (U.S.), east of Los Angeles.

The following is taken from the Desert Sun.

Seven-year-old Roberto held a "We are American" sign Monday night with his 4-year-old sister.

They don't fully understand the immigration debate being waged in Congress and coffee shops around the nation, but they stood along Highway 111 in Palm Desert to support their father, an undocumented immigrant.

"They need us, and I need them," said Roberto Sr., a Rancho Mirage resident. "That's the way it's supposed to be. We're a family."

Had immigration agents arrested Roberto in the May raids, godparents would raise his three U.S.-born children.

Waving American flags and chanting words of support for Mexico, more than 250 people across the valley protested immigration reform, the war in Iraq and high gas prices Monday.

A revised immigration bill could be considered this week in the U.S. Senate, requiring improvements to border security and employment verification programs.

The new plan also would seek to eventually phase out the temporary guest-worker program.

The new bill includes a proposal by Republican senators from Arizona and South Carolina to create a $4.4 billion fund, paid for by fees and fines collected from undocumented immigrants, solely to finance border security.

This immigration bill, which is expected to face some opposition, will be up for debate later this week, officials said.

Meanwhile, in the Coachella Valley on Monday night, passersby honked their horns while some yelled "Viva Mexico" in support of those protesting.

"We're not going to stop until we get what we want. Everybody deserves a right to have a better future," said Sylvia Cardona, a member of Comité Latino, the group that organized the event.

Formed in January 2006, the group has organized several marches, including a similar event in February last year where hundreds of people formed a human chain to protest a House resolution that would have made it a crime to aid undocumented immigrants.

At dusk, a handful of protesters turned on flashlights - a symbolic act meant to encourage the estimated 12 million undocumented immigrants living in the United States to leave the shadows and come into the light.

No one knows for sure how many live in the Coachella Valley.

"I think everybody has a right to live here legally," said Julio Macuixtle, who teaches elementary school in the Coachella Valley Unified School District. "They come for work. They enrich the culture of the United States. We need to give them a chance."

But not everyone agrees.

"The root of the problem is in Mexico. It's not here," said John Elias, a missionary whose grandmother emigrated from Mexico. "They export all the poor people here."

The way Elias sees it, the undocumented should protest for reform in the zocalos (or town squares) south of the border.

"They don't care about citizenship. All they care about is mobility."