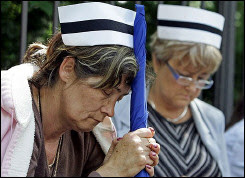 Polish riot police used batons to break up a protest by nurses in Warsaw on Wednesday, escalating an already bitter stand-off between the conservative government and health workers demanding better pay. Although the nurses are not on strike, Poland's conservative government is already confronting a go-slow by hospital doctors who are also seeking pay hikes.

The nurses, many dressed in their white hospital uniforms, had remained at the site after Tuesday's rally, where about 10,000 health workers had called for a 30-percent pay raise, following a similar hike last year, and an increase in government health care spending.

At that rally many in the crowd shouted, "We want to work, not to emigrate."

Poland's state-employed medical workers are notoriously poorly-paid, like their counterparts in many former communist bloc countries.

France's News 24 reported although the security forces cleared the street itself, the nurses managed to continue camping on a nearby verge, where they were ringed by police. Local residents turned out to support the protesters and gave them coffee.

"The police pushed us brutally onto the grass," said Zofia Kolanko, a nurse from the southern city of Krakow who had spent the night on the street.

"We're going to carry on camping here until the government representatives come out to talk to us. Up to now they've been ignoring us," she added.

"The government isn't going to solve this problem with police batons," said Juliusz Piotrowski, a doctor from Warsaw's Banacha University

The following is from EUX-TV (Netherlands).

Two protesting nurses were rushed to hospital by ambulance after the police intervention. One woman reportedly suffered a heart attack.

"I can't believe my eyes - these nurses were treated like football hooligans, there could have quite simply been talks," Civic Platform opposition MP Elzbieta Radziszewska told TVN24.

The protesting nurses were vastly outnumbered by police dressed in riot gear.

"Road blocks are illegal. We spoke with the nurses all night, we met their requests but this didn't change the situation," Warsaw police spokesman Mariusz Sokolowski told TVN24. He denied heavy force was used to remove the nurses camped out on a central Warsaw street in front of government buildings.

Doctors and nurses in Poland's chronically underfunded health sector are demanding wage hikes, which the government has said are impossible to meet in this fiscal year.

The protestors have appealed to Poland's First Lady Maria Kaczynska to facilitate negotiations with the government lead by her brother-in-law conservative Prime Minister Jaroslaw Kaczynski.

Several hundred medical workers marched through the Polish capital Warsaw Tuesday in protest of low wages in the public health sector. Physicians and nurses have also been staging a go-slow protest job action in hospitals and clinics for nearly a month.
Posted by Oread Daily at 1:32 PM