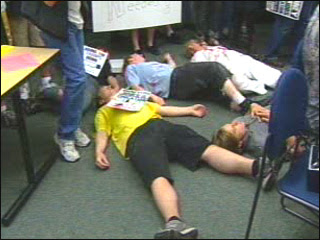 Student protesters in Seattle brought a school board meeting to a halt. A group of about 70 students protesting military recruitment in their schools marched into the meeting before Acting President Darlene Flynn could even take roll, chanting: "Yo School Board, what's up? We're here to say we've had enough."

Some students covered with fake blood collapsed on the floor, then were carried around the room.

The school board refused to talk to the kids except to demand that they get out.

"It's OK, it's OK. I want to say this is what democracy looks like. But this is not what a school board meeting looks like," said board member Darlene Flynn. Interesting comment.

After an unheeded final warning, board members left behind the rowdy crowd and moved the meeting to a quiet room, angering the students.

"I've had recruiters lie to me and my friends," said Shanay Salas, one of the protesting students. "They say you'll never go to combat. They say free college, jobs for life but really these things aren't true."

After the demonstration, the students spoke to the meeting's attendees in support of a proposed policy they wrote that would allow for a district-wide recruitment fair once a semester. Hardly unreasonable.

The following is from Youth Against War and Racism.

Seattle Students Shut Down School Board Demanding Military Recruiters Out of Schools
By Philip Locker, Dylan Simpson, and Marianne Mork

“What do we want? Recruiters out! When do we want it? Now!” chanted over 70 antiwar protestors as we marched into to the Seattle School Board meeting Wednesday night. The spirited protest, called by Youth Against War and Racism (YAWR), demanded the school board finally take real action against military recruitment in our schools. As the local TV news King 5 said, it was “intended to be political high theatre, and it certainly was effective.” Another reporter commented: “it was the most dramatic anti-military recruitment rally to date.”

YAWR is calling for military recruiters to be banned from Seattle public schools. But to stay within the legal paramaters of the “No Child Left Behind” law, we are demanding that all recruiting be done at a district-wide recruitment fair once a semester. This would create equity between the access to students that the military, college, and job recruiters have. Currently, military recruiters have a massive budget and a huge advantage over college and job recruiters. A district-wide recruitment fair would also stop military recruiters from carrying out their predatory tactics within our schools and disproportionate targeting of schools that are predominantly made up of poor and minority students.

Student activist Kristin Ebeling said: “Our public schools should not be military recruitment stations for the Iraq war. Instead of wasting $500 billion on a war for oil and empire, we need money for jobs and education.”

High school students, teachers, parents and community activists rallied outside the school board for an hour. With the start of the meeting the rally moved inside, energetically chanting and sitting in at the front of the room. To bring the reality of the war home, some students enacted a “die-in,” lying across the floor covered in blood, while the school board politicians huddled at the side of the room.

Addressing the board and the whole room, Shanay Salas and Ramy Khalil from YAWR then explained our demands to restrict military recruiters. We urged that the board amend its agenda for 10-15 minutes to discuss our proposed policy. Unfortunately, the board refused to discuss our policy, nor would they start the meeting until we ended the sit-in and moved away from the front of the room.

Board member Darlene Flynn condescendingly lectured the students: “This is what democracy looks like, but it’s not what a school board meeting looks like, and we have to have a school board meeting.” This statement, ironically exposing the undemocratic nature of the board, brought loud jeers from the demonstrators. With the protestors holding their ground, the board hurriedly left and reconvened in a back room closed to the public.

This comes against the background of the board refusing to enforce their own policy to restrict military recruiters that was passed two years ago. After a city-wide student walkout of 800 students on April 18 to protest military recruitment, attending numerous school boards meetings and sub-committee meetings, and still having the board refuse to let us speak, we decided to take matters into our own hands and organize a sit-in. However, the meeting could have easily continued if the school board had simply been willing to grant our modest request to discuss our proposed policy at their meeting for 10-15 minutes.

Since the board refused to listen to the public, we decided to continue the meeting and took public testimony from those who had already signed up to testify. A number of school bus drivers spoke about their struggle to unionize to overcome the terrible wages and conditions they face, which the board is refusing to support. While some members of the audience complained that we had disrupted an official board meeting, an overwhelming majority of the crowd voted to support our decision to continue the meeting in defiance of the board members.

While school board members claim that they cannot implement our policy because it would mean losing $40 million a year in federal funds, the fact is that our policy was carefully constructed to remain within the legal confines of the No Child Left Behind law. By restricting military recruiters to a recruitment fair on equal grounds with college and job recruiters, this policy would have absolutely no effect on federal funding.
(See relevant section of No Child Left Behind and our proposed policy at: http://groups.google.com/group/novapeaceclub)

Wednesday’s school board action was a major success in bringing real pressure to bear on the board and raising the issue of military recruitment in the public consciousness. All the local TV news gave very prominent coverage to the protest (see list of links below). But to win we will need to keep up the pressure on the school board and build an organized, active antiwar movement. This fall YAWR is organizing a major student walkout, which we are trying to spread nationally, to show that business as usual will stop until the military is out of Iraq and out of our schools.

Get active with Youth Against War and Racism and the fight against military recruiters! Please come to the next YAWR meeting on Sunday July 1, 4-6pm, at Uptown Espresso (2504 4th Ave and Wall St.) where we will be planning our next steps.

I think we're coming to the point where the people in power, our erstwhile "leaders," have so completely lost their minds, that we no longer have any options.

The way this school board treated these students shows mental and emotional maturity of the students over the parents.

The parents have simply lost all sense of what is right, wrong, appropriate, consented to and not consented to.

This school needs to be disestablished, for the sake of these kids.