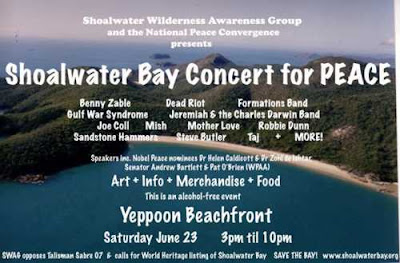 A joint military exercise Talisman Sabre – involving 7500 Australian Defence Force (ADF) personnel, 20,000 US troops, 125 aircraft and 30 ships – began at the military site, north of Rockhampton, on Monday. The Shoalwater Bay Training Area (SWBTA) purchased by the Australian Government in 1965, is used by the Australian Army, Navy and Air Force for independent and joint exercises. Other countries, particularly New Zealand, Singapore and the U.S.A. also exercise in the area.

The Peace Convergence is a nonviolent gathering in the Shoalwater region on 18 to 24 June 2007. The peak period of the Convergence will be on the weekend: Friday 22 June to Sunday 24 June. The goals of the convergence are:

to voice our call for an end to the war in Iraq, and Australian involvement with illegal and unjust US-led wars.

Shoalwater Bay (SWB), 70 km north of Rockhampton, Queensland, is a biologically diverse and beautiful coastal treasure of 400,000 hectares, including beaches, harbours and coral islands. Its pristine nature a result of geographic isolation and, in the past, only limited defence use.

Environmental legislation has been altered, removing the usual need for an Environmental Impact Assessment (EIS) for any activity the ADF deems necessary. The EIS is replaced by Public Environmental Reports (PER), commissioned, financed, reviewed and released by the military. The public input and consultation process is controlled by military.

SWAG, a grassroots, non-profit organization dedicated to protecting the natural environment and fostering peace in the Capricorn region which has been active in the last few years responding to developments in Shoalwater Bay and leading local resistance to an increasingly militaristic government and culture puts it like this:

The unique wilderness of Shoalwater Bay is worth protecting. What’s happening there symbolizes much that is wrong in the world. If the forces of the greatest war machine of all time can use a World Heritage standard wilderness area as a bombing range, weapons testing ground and place to simulate urban terrorism, what hope have we got?

The following article is from Marianas Variety

HAGATNA, Guam - ASIA-PACIFIC activists, including one from Guam, are part of a delegation protesting the ongoing U.S.-Australia military exercises being held at the Shoalwater Bay Training Area near central Queensland.

The guest from Guam is Fanai Castro from the Organisation of Peoples for Indigenous Rights, which campaigns for indigenous self-determination and opposes the expansion of U.S. militarization.

The three international guests arrived in Yeppoon, Rockhampton on Wednesday to add their voices to the protest of over 500 Australians concerned about the Australian-U.S. Talisman Sabre 2007 military exercises.

"Our guests have firsthand experience of the impact of militarization on people’s lives. They bring a timely warning about the real price paid by local people when their home communities become militarized," Dr. Zohl de Ishtar, from the Australian Centre for Peace and Conflict Studies, said in a statement sent to Variety.

A welcome ceremony was held at the Rockhampton Airport by the Fitzroy Basin Elders and the Peace Convergence, which is protesting the military exercises.

The Guam and Hawaiian visitors responded with chanting and the giving of gifts.

"It is an honor to receive such a welcoming from the indigenous elders, since it is with us indigenous peoples that the atrocities of colonialism first made its mark. In these days, it seems that militarization is the new colonialism," Guam’s Castro said.
Posted by Oread Daily at 2:56 PM