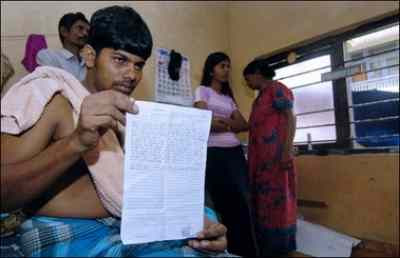 Police in Sri Lanka rounded up 28 persons last week in Welikada, they added three hundred more yesterday (one of whom is pictured here). Welikada is an eastern Colombo suburb.

According to police they were on the lookout for members of the Liberation Tigers of Tamil Eelam (LTTE), who they believe have arrived in the city.

Recently the police raided temporary lodging houses in Colombo and evicted several hundred members of the Tamil community that they claimed were linked to rebel.

That move was heavily criticized by the international community, opposition parties and human rights groups, which led the Supreme Court to order those evicted be brought back.

The government said the move was necessary as the lodges were being used by the rebels to plot attacks in the city. Later the Sri Lanka Prime Minister issued a public apology to the people and the government launched an investigation into the eviction.

There have been many reports of Sri Lankan security forces carrying out search operations in Colombo and arresting large numbers of ethnic Tamils in recent past. These mass search and arrests involve: door-to-door search, regular roadblock checks and raiding lodges and other shelters randomly.

Mass arrests of people in Sri Lanka often accompanied by reports of "disappearances" and tortures while they were in custody in the past. A Human Rights group has said it had been unable to trace many people detained by security and police forces in the past.

The arrests and abductions are continuing unabatedly in Sri Lanka. The International Crisis Group (Crisis Group) is an independent, non-profit, non-governmental organization, working to prevent conflicts worldwide, urged the government of Sri Lanka to end the policy of extrajudicial killings and disappearances and take active measures to prevent abductions, killings and arbitrary detentions in government-controlled areas.

In a detail report it’s said, Tamils are increasingly fearful and alienated from a government that claims to be liberating them from the LTTE but has failed to promote any viable political solution to the conflict. The violence and abuse suffered by many Tamils has ensured increased support and funding for the insurgents.

The following is from TamilNet.

About three hundred civilians were taken into custody in a cordon and search operation conducted by the Sri Lanka Army (SLA) and Sri Lanka Police from midnight Tuesday till the dawn of Wednesday in Welikada division in Colombo district. They are currently being detained in police station and are being interrogated.
Majority of them are Tamil civilians, and residents of north and east and upcountry.

Majority of them had been employed in private trade sector.

Police sources said they were taken into custody as they failed to prove their identity with valid documents and give valid reason for their stay in the location.
Posted by Oread Daily at 4:14 PM