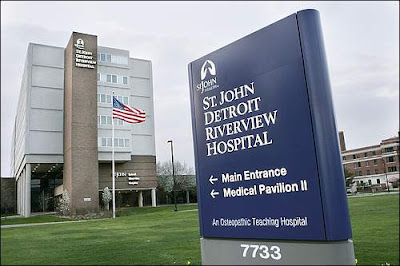 Poor residents of Detroit's east side can say "so long" to hospital services.
The Detroit Free Press reports a secret deal conceived over champagne at the Detroit auto show in January led metro Detroit's best-known cancer program, Barbara Ann Karmanos Cancer Institute, to make plans to leave its home base at the Detroit Medical Center and move to St. John Detroit Riverview Hospital (pictured here). The move will effectively close the door on hospital service to Detroit's east side. Riverview's closing, already planned for June 30, has triggered concerns about the care of the hospital's mostly poor patients, including the 30,000 emergency patients and 1,500 mothers who gave birth there last year.

St. John's itself reportedly is wanting out of the area for the reason you'd expect. They ain't making any money...and healthcare in the USA is more and more only about the money.

The hospital has said it was losing too much money and earlier this month stopped accepting inpatients. Because roughly 90 percent of its 11,000 annual inpatients are covered under the Medicare or Medicaid public assistance programs, Riverview has struggled economically, said Bob Hoban, a senior vice president for St. John Health, Riverview's parent company.

Most of the hospital's 1,500 employees will lose their jobs. Janet Scott, a medical records clerk who has been at Riverview for more than 30 years spoke for many of those empolyees. "It's very devastating for me," she said. "It's going to be hard to find another job."

Officials at other area hospitals have complained that Riverview's closing will burden them.

"We're 90 percent full on average and there are many days where we're 100 percent full," said Nancy Schlichting, president and chief executive of Henry Ford Health System, which has a trauma center hospital in Detroit.

In Detroit the number of hospitals in the city has dwindled to seven or eight from 42 in 1960.

Albert Garrett, President of Michigan AFSCME Council 25 along with Inell Howard and Lorraine Fuque (sometime patients at St. John's Riverview) jointly petitioned Michigan Attorney General Cox to initiate litigation to stop the closure of St. John's Riverview Hospital. The Attorney General said there was nothing he could do. Cox wrote that while he is "troubled by the potential impact of this decision on Detroit residents in need of care," neither he nor the Michigan Department of Community Health has "specific authority to pursue the legal action you request."

The Detroit Medical Center and AFSCME filed a lawsuit to stop the Barbara Ann Karmanos Cancer Institute from moving to St. John Detroit Riverview Hospital. Wayne County Circuit Judge Gershwin Drain has scheduled a July 2 hearing on a lawsuit filed May 4 by the DMC and AFSCME Council 25 -- which represents several hundred Riverview workers -- to stop Karmanos from buying Riverview and moving to the East Jefferson facility by next year. Legal observers say there is little reason to think the suit will succeed.

Experts say Riverview's decision to close fits a distressing, decades-long pattern of hospital closures in older cities across the nation. The trend has left large swaths of predominantly poor, black neighborhoods in cities such as St. Louis, Philadelphia and Cleveland underserved.

"This hasn't been happening in the suburbs and it isn't happening in Phoenix, Arizona, where they can't build hospitals fast enough," said Bruce Siegel, a research professor at the George Washington University Medical Center in Washington, D.C. "This is occurring in older, urban inner-city areas."

The Robert Wood Johnson Foundation (RWJF) recently funded an updating of an existing data set on US urban hospital closings, mergers, and other changes. In their final report to RWJF, the researchers concluded: "Our findings suggest … that the pattern of hospital closings in US cities in recent decades may have damaged access to care generally, may have had an adverse and disproportionate impact on minority Americans specifically, and may even have increased the cost of health care … Greater protections should be offered to hospitals that remain open today, unless it can be shown that their closing will not harm access, or that any harm to access will be offset by sure and substantial cost cuts … Public intervention might be … useful to conserve needed hospital capital … In one or two decades, use of hospitals is likely to rise substantially as baby boomers age and use inpatient beds at much higher rates."

Yikes...that's me they're talking about...


The following comes to us from the World Socialist Web Site.

St. John Detroit Riverview Hospital has served east side Detroit since 1987. Earlier this year, the Barbara Ann Karmanos Cancer Institute announced their intent to transform the community hospital into a facility devoted exclusively to cancer patients.

On June 30, this intention will become a reality, and the area’s residents, many of whom are poor and/or elderly, will no longer have a community hospital. The hospital presently employs 1,511 workers, many of whom reside in Detroit. Only 400 of these workers will remain once the Cancer Institute opens.

Talking to the hospital employees and area residents, one gains an appreciation for the services provided by the hospital to the surrounding neighborhood and what the loss of these services will mean to both residents and employees. One also begins to grasp the devastating consequences of the domination of healthcare services by profit interests.

St. John Detroit Riverview Hospital has geared its services to the mostly poor and elderly who live in the surrounding area. Employee Terri Anderson stated that because “many of our patients are geriatrics who are unable to get to other hospitals, St. John provided transportation for them.” Kim Clark, another employee, added that because the nearest hospital is 5 to10 miles away, those area residents who do not have cancer “will have to depend on friends or public transportation.” She quickly added, however, that “no buses run from here to the remaining hospitals.”

Joe Morgan, area resident and husband of a hospital employee, added to the sense of impending devastation when he told this reporter, “A lot of patients don’t have insurance, and they depend on this hospital for care and medications.”

Losing St. John Detroit Riverview Hospital will also affect hospital employees, both present and future. An RN with 38 years of experience, who asked to remain anonymous due to the uncertain nature of her severance package, said that she had “planned on retiring in a few years,” but she knows that when she looks for another job, “no one will match my present pay.” She also added, “doctors will be displaced due to change in purpose [from community hospital to cancer treatment].”

Reverend Nora Brown told this reporter that of those employees who will be retained by the cancer treatment facility, many will move from “full-time to part-time” status, which means that while the employees may work 40 or more hours, their benefits will be determined by the part-time formula. And while severance pay will be provided for those employees who were unionized, the amount, according to employee Angela, will be determined by a formula of “one week’s pay for each year you’ve been here.”

The employees will also pay emotionally when they lose their jobs. Miss Johnson, an RN, said that when the closing was announced, “I kind of felt like I was being put out on the street from my own home.”

When asked why a hospital that had served its community so faithfully was being closed, those interviewed pointed to the privatization of healthcare and its demoralizing consequences. As Joe Morgan put it, “It’s the money.”

Miss Johnson underscored this statement when she reasoned, “St John’s wants to get out of the city in order to make more profits.” She also spoke to the sense of demoralization among those who have spent their working lives in healthcare: “Healthcare has really changed over the years. It used to be that hospitals took care of their patients. Now, it’s all about the numbers.”

Several employees saw evidence of this “all about the numbers” attitude in the present conditions at Riverview Hospital and the outlook for the nursing profession. Miss Johnson mentioned that the hospital has become “a corporation, so therefore they don’t think about the employees.” Apparently, they don’t think about the patients either. Employee Angela pointed out that due to a lack of available beds, “We’ve had people that have actually been in the ER for five days.”

For these and other reasons, including placing “too much responsibility on the nurses,” Angela declared, “Healthcare and nursing are not good professions anymore.”

Near the end of our conversation, Miss Johnson looked back toward the hospital and said with evident dissatisfaction, “We never see the CEO or management walking the halls.” Perhaps it is this disconnection from the reality facing hospital workers and patients that is behind the viewpoint of St. John Health President and CEO Elliot Joseph, who stated in a press release, “The sale helps St. John Health to be good stewards of its resources so we can continue to serve Detroit through our vibrant health programs and services.”
Posted by Oread Daily at 4:07 PM