IDAHO IS A NO GO ZONE 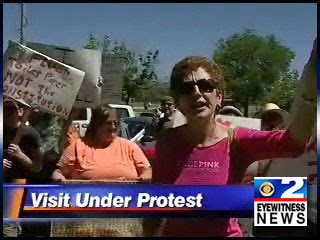 Well to Bush and Company it must seem like the world is going to hell in a handbag. I mean, come on, can't his Attorney General even go to Idaho without having to run and hide. I mean - Idaho.

Yesterday Alberto Gonzales figured he'd drop in for a brief visit to Boise, talk about gangs, have a nice little outdoor photo op and move on.

Instead of meeting with reporters outside the Fort Boise Community Center, Gonzales was forced to stage the event more than an hour later at offices of the local federal prosecutor.

When Gonzales was scheduled for a press conference outside the community center, an official approached a rostrum set up with a temporary attorney general’s seal and said the conference would be postponed, moved and open only to the press. The crowd booed in response. Some members of the protest chanted, “Coward, coward.”

And if you are wondering about the gang situation in Idaho. One local resident Phil Lansing had this to say, ''If he's here to talk about gangs, I say there's a gang running this country.''

The following article is taken from the Idaho Statesman.

About 100 Boise protesters forced U.S. Attorney General Alberto Gonzales to move and postpone a news conference on anti-drug efforts Tuesday in his first visit to Idaho.
The group of Democratic Party candidates, Idaho Peace Coalition members and others stood with signs criticizing Gonzales's stance on torture and civil rights. They sang and chanted outside the Fort Boise Community Center, which Gonzales had toured to see its programs and services aimed at keeping local teenagers off the streets.

When Gonzales did talk to Idaho media, in the protected confines of Idaho U.S. Attorney Tom Moss' office, he said the community center is a nice reminder to law enforcement officials like himself that "we do need to focus on prevention and education on the front end."

He met Tuesday with Moss' deputies and local heads of federal agencies, but also with local law enforcement officials on the Treasure Valley Metro Anti-Gang Task Force, which includes prosecutors, state police and police officers and sheriff's deputies from Ada and Canyon counties.

The federal government can help local fights against gangs by offering tougher sentences and prison assignments far away from a gang member's turf, he said.

As for the Treasure Valley's gang problems, Gonzales said he would go back with his deputies to see what tools and ideas could be shared to help the fight here.

"We need to see whether we have additional resources that can be shared with this community," he said.

Gonzales answered just a few questions more than an hour past his originally scheduled time.

For about an hour before his scheduled appearance at the community center, protesters gathered at the outdoor podium where Gonzales was set to speak. They sang the national anthem and "This Land" and "Dusty Old Dust (So Long, It's Been Good to Know You)" as they waited for the embattled attorney general.

Gonzales has been criticized for his role in memos giving interrogators leeway to perform what many have called torture on terrorism suspects and also for his role in supporting secret domestic wire-tapping policies.

Progressive activist and former Democratic congressional candidate Jim Hansen even talked for a few minutes at the podium, thanking the protesters for coming.

With far more protesters than media waiting for Gonzales to appear, an aide walked to the podium and quickly announced the news conference would be moved to Moss' office.

Then fellow Democrat and 2006 congressional candidate Larry Grant stepped to the microphone.

"I think he heard you," he told the crowd.

Gonzales said the protesters would have distracted from his message had he kept the original news conference plan.

Boisean Diane Roberts, a member of the Idaho Peace Coalition who led the protesters in the songs and chants, had a more colorful response. What she called Gonzales can't be printed in the newspaper.

"Just put ‘chicken' and the four little dots," she said. "Everybody in Idaho will know what I meant, believe me."

Hours earlier, a group of former Democratic congressional candidates called for him to resign.

Boise attorney Dan Williams, who ran twice against former U.S. Rep. Helen Chenoweth-Hage, said he thinks the Bush administration sent Gonzales to Idaho because the state is so Republican.

"We're here to tell you that people in Idaho also watch the news," he said. "They also watch people testify in Congress, and they know somebody is trying to mislead them."
Posted by Oread Daily at 2:24 PM