FEAR AND LOATHING IN MIDLAND, TEXAS 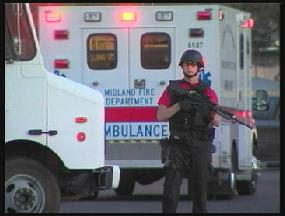 Twenty year old Chad Sanchez was shot and killed in Midland, Texas this last April. Sanchez was shot by Det. Matt Fraley and Sgt. Michael Hedrick of the Midland Police Department. Reports show that one officer used his duty weapon, which is a Glock .45 caliber semi-automatic, and the other used a rifle, but it is unclear which officer was toting which firearm. Sanchez was hit in the torso and head. Sanchez was a suspect in a double homicide, police said. The department is still searching for the gun that killed the two men on April 23, the same weapon police believe was at some point in Sanchez's possession that day. They've never found it. When shot Sanchez was unarmed. Police continue to investigate the double homicide.

The two Midland police officers who did the shooting were first placed on administrative leave, but were shortly put back on the job although the investigation into the shooting continues. According to Midland police, an administrative review board concluded that the officers’ actions were in compliance with both state law and Midland Police Department general orders.

At least, three other officers were on the scene and did not discharge their weapons.

Armando Garcia, was shot by police in a separate questionable incident last September. Like Sanchez he was shot, at least once, in the head. Garcia was shot after police reported seeing a white Ford Mustang speeding. Police said Garcia fled on foot and was cornered while climbing a fence behind some trailers. They say he came down off the fence and charged the officers. Like Sanchez, the "suspect" was not armed. Patrol Officer John Chandler who shot Garcia was alone at the scene.

On May 19, LULAC presented MPD spokeswoman Tina Jauz with an open records request for information regarding any police-involved shootings from Jan. 1, 1987 to May 31, 2007. They want to find out information on police brutality in Midland, complaints against officers, and whether any suspects have died while in police custody as another step into questioning law enforcement conduct in recent incidents.

LULAC President Felipa Lara said the group's goal right now is to let the community know they will continue to pursue questions about police conduct and the use of deadly force until they are answered.

"We want the young adults to feel safe and to let them know they can trust the police; to do that, we need answers," Lara said.

Sanchez’s Aunt said last month, "What they did, to shoot him like that. That's why we have the court system to take it step by step."

Yesterday there was a meeting to further talk about what's next and what's past.
My guess is nothing will happen. What's yours?

The following article is from the Midland, Texas Reporter Telegram.

Tearful family members representing two Midland men who were killed during struggles with police spoke out about their beliefs of the local police department's misuse of power at a Thursday meeting with a mediator from the U.S. Department of Justice, officials said.

More than 100 Midlanders of all races were on hand for the three-hour closed-door meeting with Synthia Demons of the community relations service division of the DOJ. And many voiced similar sentiment as the families of Chad Sanchez, 20, and Armando Garcia, 20, with stories about police brutality and harassment by officers, according to , according to Lulu Corona, civil rights chair of the League of United Latin American Citizens.

"We are basically being protected by murderers," said Amanda Luna, Garcia's cousin. "And that does not make me feel safe at all."

Officers reported that the two men were both shot and killed while resisting arrest during different incidents during last 10 months. But Corona said the fact that neither man had a weapon is what caused concern for her organization. Both men's deaths were reported to have been due to gunshot wounds to the head.

"It's scary. (Teens) are not afraid of gangs anymore, they're afraid of the cops," said Christy Diaz.

While Demons, who spoke with Interim Police Chief Price Robinson earlier Thursday, was only in Midland to hear the concerns of residents, Luna said she wished she would have had more of a reaction to what people were saying.

"I was excited that a representative from the department of justice came to hear us, but I expected them to demand an inquiry into the police department," she said. "But I'm still glad she did come."

The CRS has no law enforcement authority and does not impose solutions, investigate, prosecute or assign blame and fault, according to information provided by the USDOJ.

There are plans for a future meeting between Midland Police officials, LULAC and Demons' office. It is likely to take place in Dallas.

While some attendees believed Hispanics have been targeted by police, others disagreed.

"It was an eye-opener," Corona said of the meeting.

Officials of the Permian Basin chapter of the LULAC said they invited Demons to help address and resolve the issues Midlanders may have with the MPD. But Corona said other agencies, such as the Texas Rangers and the Midland County Sheriff's Office, came up as well. The Reporter-Telegram was not told of any specific incidents involving the Texas Rangers or Sheriff's Office.

"It's not about officers who do their jobs," Corona explained. "It's about those few who feel they are above the law."

Corona said she and Demons spoke about what to do if no resolution is reached, but would not say what that next step would entail.

The meeting, while open to the public, was held behind closed doors. The media and police were asked not to attend because Demons said she was concerned about people being afraid to be fully candid about their dealings. Reporter-Telegram appeals to sit in on the meeting were met with threats by LULAC to cancel the meeting outright.
Posted by Oread Daily at 3:46 PM