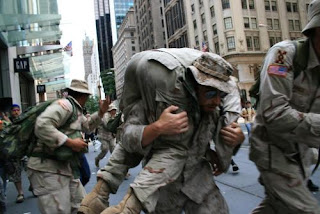 In an effort to illuminate the true reality of the conflict in Iraq, members of Iraq Veterans Against the War (IVAW) engaged in a series OF street theater actions around the New York City area on Sunday, May 27. Veterans of the conflict in Iraq played the part of American service members – with reenactments that highlighted various aspects of life in combat in Iraq. Local activist volunteers acted as civilians in the realistic portrayals of actual interactions between U.S. troops and Iraqi civilians.

One of the vets said conventional methods of getting their message out have not succeeded. They hope Operation First Casualty will break through. The name recalls the adage that truth is the first casualty in war.

Thomas Brinson, 64, of Long Beach, New York, dusted himself off in Union Square after playing the role of Iraqi civilian, face down on the pavement with a bag over his head.

He told media representatives, "I'm a Vietnam veteran, and what's happening today in Iraq is exactly what happened 40 years ago when I was in Vietnam."

The following is from the Iraq Veterans Against the War (IVAW).

“Truth is the first casualty of war. We’re bringing the truth of the war home.”
-Demond Mullins, member of Iraq Veterans Against the War NYC Chapter

New York, NY – Today members of Iraq Veterans Against the War (IVAW) staged simulation military operations throughout the New York City area to give fellow Americans a glimpse of the day-to-day realities of the Iraq War.

“By reenacting what we’ve been through in Iraq we hope to inspire more of our fellow Americans to act to end the war now,” said IVAW member Adam Kokesh. Actual veterans of the conflict in Iraq played their part of American service members, dramatically interacting with non-veteran supporters playing civilians.

This day coincides with a national observance of Memorial Day (Monday, May 28), which bears particular significance in the midst of the fifth year of a war that has claimed the lives of over 3,300 American service members and over 655,000 Iraqis.

“This Administration should expect to see more of us – soldiers and veterans tired of the lies. We’re going to make the truth of this war visible,” said IVAW member and Operation First Casualty participant Paul Abernathy.
Posted by Oread Daily at 1:27 PM