THE PRICE OF SOCIAL INJUSTICE 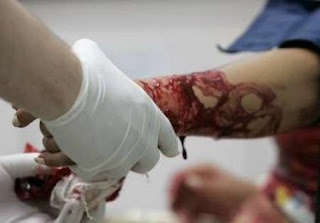 In a country wracked by gang violence, police, and paramilitary murders, thousands have taken to the streets demanding something be done.

Earlier this month Amnesty International said the government's inability to provide security has transformed Brazil's largest cities into a "patchwork of violent fiefdoms" controlled by drug gangs and paramilitary militias.

Amnesty said negligence has left poor Brazilians in the crossfire between police and criminals - the victims of stray bullets, police curfews and extortion by militias and drug traffickers.

"Rio de Janeiro and Sao Paulo have reached a tragic impasse. Criminal gangs ... have rushed to fill the vacuum left by the state, Balkanizing the cities into a patchwork of violent fiefdoms."

Experts say the main culprit is the huge gap between rich and poor. Brazil ranks 10th among countries with the worst income distribution, according to the 2006 UN Development Report.

In Recife, underpaid and corrupt police officers cause as much violence as they repress, experts say.

"Policemen do bank robberies and kidnappings, either they take a cut or do it themselves," said a former police officer, who asked to remain anonymous. "When someone doesn't pay, they take him out."

Police and crime are so entwined that authorities often couldn't tackle crime if they wanted to.

The following little bit of news is from EFE.

Brasilia, May 30 (EFE).- An organization on Wednesday here staged an emotional protest against violence and displayed on a central capital avenue 15,000 white handkerchiefs, one for every death registered in Brazil since last January.

The demonstration was organized by the Rio de Paz group, which was founded in Rio de Janeiro, the city that has suffered most this year from the growing wave of violence that has turned that tourist center into a battleground complete with continuous deadly clashes between police and criminals.
Posted by Oread Daily at 3:33 PM