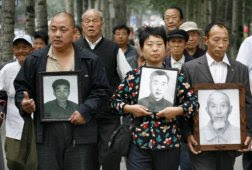 Demonstrators gathered outside the Japanese Embassy in Beijing on Thursday to protest a court ruling denying compensation to five Chinese forced to work as slave laborers in Hiroshima during World War II.

The Supreme Court of Japan denied compensation claims made by five Chinese wartime slave laborers back in late April, ruling that companies that utilized Chinese individuals were not obligated to provide compensation because the 1972 Joint Communique of the Government of Japan and the Government of the People's Republic of China renounced Chinese claims for war reparations from Japan. The ruling by the top court reversed a lower court ruling that awarded the five forced laborers a total of $230,300 in compensation for their suffering.

Foreign Ministry spokeswoman Jiang Yu in Beijing Thursday told a regular news conference that the impressment of laborers was a severe crime committed by the forces of Japanese militarism during their invasion of China. It is also an issue left over from history between the two countries.

Some 40,000 Chinese were taken to Japan in the early 1940s to work as slave laborers, mostly in coal mines and ports, including about 360 at the Nishimatsu company. Tens of thousands of others from Asian countries were also wartime slave laborers.

The following is from JAVNO.

A group of about 25 Chinese made a rare but carefully choreographed protest in front of Japan's embassy in Beijing.

A group of about 25 Chinese, including former forced labourers and at least one elderly woman forced into sex slavery, made a rare but carefully choreographed protest in front of Japan's embassy in Beijing on Thursday.
Beijing is wary of any public protests, even if the target is Japan's 1931-1945 invasion and occupation of parts of China, lest they spin out of control and turn against the Chinese government.

Chanting "the Japanese government must provide compensation" and "Japan must apologise", and carrying banners and pictures of Japanese atrocities during World War Two, the small group dispersed within about an hour.

"My leg was broken by them. I never expected that I could still be alive today. Now I am going to sue those Japanese monsters who treated me so cruelly," said Liu Qian, 86, fighting back tears.

"They seized us, took us to their military base and raped us. We were held there for 41 days. After being locked up, we could not even walk, only crawl," said Liu Mianhuan, 81, a former "comfort woman" for the Japanese military.

Police closed off the street ahead of the protest and took down the identities of foreign reporters covering the event, but allowed it to go ahead.

They also warned people queuing for visas at the Polish embassy opposite not to get involved.

A few protesters carried pictures of relatives who had been forcibly shipped to Japan to work in factories during the war, and had later died.

Some former workers who took part were so old and frail they had to be supported by younger protesters.

Dozens of wartime compensation suits have been filed against the Japanese government and companies associated with its aggression in the first half of the 20th century, but almost all have been rejected by Japanese courts.

Sino-Japanese relations have been icy for much of the past half-decade, largely because of former prime minister Junichiro Koizumi's annual visits to a shrine to Japan's war dead. Beijing sees the Yasukuni Shrine as a symbol of Japan's past militarism because some convicted war criminals are honoured there.
Posted by Oread Daily at 3:11 PM