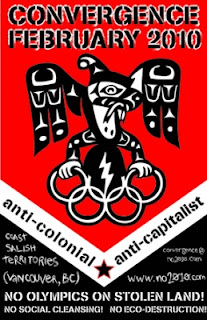 The following announcement is from the web site No 2010 Olympics on Stolen Native Land.

Calling on all native warriors, anti-capitalists, anti-poverty activists, environmentalists, and concerned individuals, to convergerge against the the 2010 Winter Olympic Games.

In February 2010 the Winter Olympic Games and its supporters will be converging on Vancouver, Whistler, and surrounding unceded native land in Coast Salish Territories.

Let them know that it will not be business as usual and that where ever the neo-colonial beast spreads its parasitic tentacles that the people will rise to sever them.

Converge against the Olympics and let our voices be heard!

No Olympics on Stolen Native Land!
No Social Cleansing!
No Environmental Destruction!

For more info:
convergence@no2010.com
Posted by Oread Daily at 3:28 PM