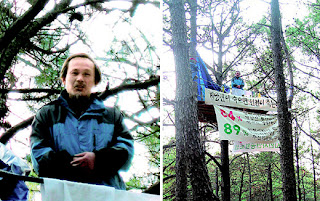 Reverend Yun In-jung (see picture) who has been waging a protest atop a pine tree on Mt. Gyeyang in Incheon for a hell of a long time has come down. The protest is against a plan to build a golf course on the mountain. Shin Jeong-eun, an official of Green Incheon, an environmental activism group behind the demonstration, took herself to the top of the pine tree on October 26 last year and started the sit. Rev. Yun took her place in the branches of the tree on December 20. The demonstration is aimed at stopping Lotte Engineering & Construction’s plan to "develop" the mountain.

The following is from the Hankyoreh. The Hankyoreh is an intersting story in itself by the way. The newspaper is an independent operation founded by a group of journalist looking for journalistic freedom. Among them were dozens of former journalists who had been ejected from their jobs due to their roles in promoting freedom of the press and democracy. Their long-cherished dream of beginning an independent newspaper came true through successful fundraising, which began shortly after popular uprising against the military dictatorship in 1987. The Hankyoreh was inaugurated on May 15, 1988.

The Hankyoreh describes itself as "...a progressive newspaper, decisively committed to journalistic freedom, democracy, peaceful coexistence and national reconciliation between South and North Korea..."

Environmentalists have ended their 210-day treetop protest against a construction project, saying that a large percentage of area citizens are now against the plans.

Two activists took turns sitting atop a tree on Mt. Gyeyang, Incheon, in a protest which started on October 26 last year against Lotte Engineering & Construction’s plan to build a golf course on the mountain. The protest ended on May 23.

A citizens’ committee formed by civic, social, and environmental organizations in the Incheon area against the golf course project said in a press release on May 23, "Since more than 80 percent of the citizens are opposed to the plan to construct a golf course, and the health of Reverend Yun In-jung, who had [been atop the tree] for the past 155 days, had worsened, we decided to stop the protest."

In a statement, Reverend Yun said, "If the connections and circle of living things are broken, life also will be put to an end. Let’s leave beautiful Mt. Gyeyang and its pine trees to our children and future generations."

Shin Jeong-eun, an environmental activist of Green Incheon, waged a demonstration atop the pine tree for 56 days and Rev. Yun took her place on December 20 last year.

The site around the tree became a venue for cultural performances, prayer meetings, ecological and environmental education for children, and research by college students. Major religious figures, including Rev. Kwon O-seong of the National Council of Churches in Korea and a number of lawmakers such as Hong Mi-young, Moon Byung-ho, and Woo Won-shik of the pro-government Uri Party and Dan Byung-ho of the Democratic Labor Party visited the site to support persons taking part in the demonstration.

Han Seung-u, an official of Green Incheon, said that his group would stage more powerful citizen protests until the golf course construction plan is cancelled. In this way, he said, the demonstration atop the pine tree could be recorded as a historical event that played a role to preserve Mt. Gyeyang eternally and make the mountain a natural inheritance for citizens.

Lotte, however, still is resolute to push ahead with the planned construction of an 18-hole golf course and Incheon mayor Ahn Sang-soo officially supports Lotte’s plan, so controversy over development of the mountain is expected to continue.

Julia Butterfly Hill, a U.S. environmental activist, set a record by waging a protest atop a cedar tree for 738 days in 1997 to protect the 900-year-old conifer. In Korea, there was a successful 17-day demonstration atop a tree to save Mt. Daeji in Yongin, Gyeonggi Province from development in 2001.
Posted by Oread Daily at 1:44 PM