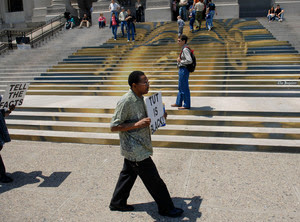 Two organizations held demonstrations at the Franklin Institute in Philadelphia on Sunday, protesting the deliberate de-Africanation of the King Tut exhibit.

Dr. Molefi Kete Asante, president of the Association of Nubian Kemetic Heritage or ANKH, says the exhibit King Tutankhamen and the Golden Age of the Pharaohs is fundamentally flawed:

Shahrazad Ali of the African-American Freedom and Reconstruction League:

“It is wrong to change the features on some of these statues and artifacts and give them lighter eyes or paint them white or give them chiseled noses or break the noses off completely so you can't see that they have the Negroid features.”

About 50 protesters walked in front of the crowded museum stairs carrying signs bearing statements including "Nefertiti is my sister," "Stop stealing our history" and "King Tut's daddy was black."

Asante said the exhibit doesn't tell visitors Egypt is in Africa, and he believes that many people leave thinking Egypt is in Europe.

He claims the museum did this for "commercial reasons."

"They're trying to make it more accessible, more appealable to white people. It's all about making cash," he said.

Yesterday's protesters in Philadelphia were not alone. From Los Angeles to Fort Lauderdale, demonstrations have been held against the exhibit in every city it's visited since coming to this country in June 2005.

George Williams, who is black and operates a pretzel cart in front of the museum, said he believes that King Tut is a piece of history all people share.

"Regardless if he was black or white, we're all equal and we're all [descendants] of King Tut," he said. "We can love each other."

That'll be the day.

The following snippet of news is from KDKA (Philadelphia)

A traveling exhibition on King Tutankhamun drew about 50 protesters in Philadelphia who denounced the popular display as racist.

Molefi Asante is a professor of African-American studies at Temple University. He led the demonstration Sunday outside the Franklin Institute, saying the exhibit has no mention of Africa and that it suggests the ancient Egyptian king was white.

Asante specifically pointed to a representation of Tut that he said "looks more like Boy George than the boy king."

A spokeswoman for the Franklin Institute said images of Tut vary throughout the museum.

Similar protests have been held in other U.S. cities where the exhibit has appeared.
Posted by Oread Daily at 4:05 PM